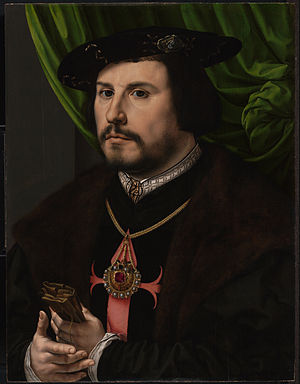 Francisco de los Cobos y Molina (c. 1477 – 10 May 1547) was the secretary of State and Comendador for the kingdom of Castile under the rule of the Emperor Charles I of Spain.

He was born in Úbeda ca. 1477 and died May 10, 1547 in the same city. He was born to the aristocratic, though economically disadvantaged family of Don Pedro Rodríguez de los Cobos, he was the son of don Diego de los Cobos, regent of Ubeda, and Catalina de Molina. In 1522, he married the fourteen-year-old María de Mendoza y Sarmiento, daughter of Juan Hurtado de Mendoza y María de Sarmiento, 6th Countess of Ribadavia. His titles would be inherited by his male son Diego de los Cobos y Hurtado de Mendoza, (circa 1523 – 1575), who was subsequently awarded the title of 1st Marquis of Camarasa, together with his wife, by king Charles I of Spain, a.k.a. Holy Roman Emperor Charles V on 18 February 1543 .

His daughter, sister of the 1st Marquis of Camarasa, Diego, is usually known as Maria Sarmiento de Mendoza, as sometimes Spanish Nobility females took as their first family name their mother family name. She married at Valladolid on 30 November 1538, Gonzalo II Fernández de Córdoba, Governor of the Duchy of Milan, 1558–1560 and 1563–1564, a Knight of the Order of the Golden Fleece since 1555, living in Italy when her husband was there a Governor and spending considerable amounts of money, no issue.

In 2008, this title was held by the duke of Segorbe, Ignacio Medina Fernández de Córdoba y Fernández de Henestrosa.

His career benefited from the help aforded by his uncle, Diego Vela Allide, treasurer and secretary of queen Isabella I of Castile. Later, by 1503, he worked as a scribe under the dean of the Queen's secretaries, Hernando de Zafra. In 1507, upon Zafra's death, he became first Treasurer of Granada, and then Regent for Úbeda the next year. These positions were entitled to collect tribute and payments to the crown.

After the death of king Ferdinand of Aragon in 1516, Cobos was charged by Cardinal Cisneros with traveling to Habsburg-ruled Flanders to become a counselor for the young new monarch, Charles I of Spain. This proved to be the crucial decision of his career, as through the favor of William II de Croÿ, Lord of Chièvres, he became secretary to the king. He advised Charles on matters that dealt with the Spanish portion of his domains, and emerged as a rival to Grand Chancellor Mercurino Gattinara. Gattinara's fall in 1528 confirmed Cobos's victory, and led to his assumption of the leadership of the council of State. After traveling with Charles from 1529 until 1533, Cobos's expertise in financial matters kept him in Spain, where he served as the effective head of government until his death.[1]

Patronage of the arts

Cobos was able to amass vast riches in his work with the state. He was able to use some of his riches in fostering patronage and acquiring art. He met Titian and arranged for the emperor's portrait by the famed Venetian artist. One sad note was the loss during a shipwreck of a large assembly of Italian works, including a Pietá by Sebastiano del Piombo and a series of paintings from the City council of Lucca. Additionally he was able to collect portraits of royalty and nobility, as well as exotic gifts brought to Spain after the conquest of the Aztecs and Incas. He is known to have given an Aztec manuscript bound in tiger skin to the historian Paolo Giovio in Naples. His patronage also led to the Italianate Renaissance architecture found in the town center of Úbeda.