The Franco-Spanish War (1635–1659) was a military conflict that was the result of French involvement in the Thirty Years' War. After the German allies of Sweden were forced to seek terms with the Holy Roman Empire, the first French minister, Cardinal Richelieu, declared war on Spain because French territory was surrounded by Habsburg territories. The conflict was a continuation of the aims of the War of the Mantuan Succession (1628–31) in which France invaded northern Italy to take possession of territory claimed by the Spanish Habsburgs. The Franco-Spanish War ended in 1659 with the Treaty of the Pyrenees.

For years, the Kingdom of France, under the Valois and Bourbon dynasties, had been the rival of the House of Habsburg, whose two branches ruled the Holy Roman Empire and Spain, respectively. For much of the 16th and 17th centuries, France faced Habsburg territory on three sides; the Spanish Netherlands to the north, the Franche-Comté on its eastern border, and Spain to the south. The Habsburgs thus stood in the way of French territorial expansion, and so France faced the possibility of invasion from multiple sides. France therefore sought to weaken Habsburg control over the possessions.

During the Thirty Years' War, in which various Protestant forces battled Imperial armies, France provided subsidies to the enemies of the Habsburg Empire. France generously supported a Swedish invasion of the Empire after 1630. After a period of extraordinary success, the Swedish-led forces were decisively defeated in 1634 by a combined Imperial-Spanish army in the Battle of Nördlingen, leading many of Sweden's allies to defect to the Imperial side. Although Sweden itself continued to fight, it was seriously weakened.

Seeking to ensure that its major ally remained in the war and ensure an outcome favourable to France, France's First Minister, Cardinal Richelieu, decided in 1635 to involve his kingdom in the active fighting and declared war on Spain. 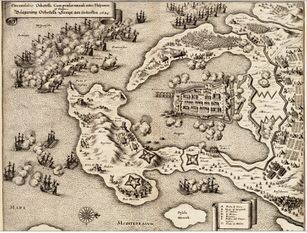 The blockade of Orbetello by Matthäus Merian

The open war with Spain started with a promising victory for the French at Les Avins in 1635. The following year Spanish forces based in the Southern Netherlands hit back with devastating lightning campaigns in northern France that left French forces reeling and the economy of the region in tatters. The Spanish looked set to invade Paris just as their vast continent wide fiscal commitments forced them to suspend their aggressions. The lull in the Spanish attacks gave the French a chance to regroup and force Spanish forces back towards the northern border. They also sent forces through Lorraine into the Alsace to cut the Spanish Road, the vital supply line connecting the Spanish Netherlands to Spain through the Mediterranean port of Genoa. In 1640 internal political tensions caused by the burden of the Thirty Years' War led to the simultaneous revolts of Catalonia and Portugal against the Spanish Habsburgs. Spain was now fighting two major wars of secession in addition to a great international conflict; the total collapse of the Spanish Empire appeared imminent. The institutions of Catalonia proclaimed the Catalan Republic allied with France in January 17, and the French occupied Catalonia, ostensibly to help the rebels. In 1643, the French defeated one of Spain's best armies at Rocroi, northern France; the myth of Spanish invincibility was at an end.

During the last decade of the Thirty Years' War, the Spanish forces in the Spanish Netherlands were sandwiched between French and Dutch forces and the French won a major victory at Lens but Franco-Dutch forces could not decisively crush the embattled Army of Flanders. When the peace treaty was negotiated, France insisted upon Spain being excluded, but the demand was rejected by other parties to the talks. In the Peace of Westphalia, France gained territory in the Alsace, thus interrupting the Spanish Road; at the signing of the treaty, Spain recognized the independence of the Dutch republic but gave up little else; indeed the Spanish had to be paid to leave positions they had seized on the Rhine.

In Italy, France fought with the more or less reluctant support of its client state Piedmont against the Spanish in the Duchy of Milan. Confusion was added from 1639–1642 by the Piedmontese Civil War. The siege of Turin in 1640 was a famous event in both this war and the Franco-Spanish conflict.[6] In 1646 a French fleet commanded by Jean Armand de Maillé-Brézé (18 October 1619 – 14 June 1646) was defeated in Battle of Orbetello and the army it was sent to support was repulsed by Spain's Tuscan presidios; Milan remained firmly under Spanish dominance. 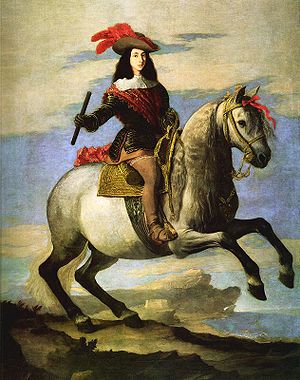 The year 1648 witnessed the eruption of a major revolt against royal authority in France, known as the Fronde. Civil war in France continued until 1653, when royal forces prevailed. At the Fronde's conclusion, the whole country, wearied of anarchy and disgusted with the nobles, came to look to the king's party as the party of order and settled government, and thus the Fronde prepared the way for the absolutism of Louis XIV. The general war that had been initiated by the French nobles continued in Flanders, Catalonia and Italy, wherever a Spanish and a French garrison were face to face, and Condé, with the wreck of his army, openly and definitely entered the service of the king of Spain. This "Spanish Fronde" was almost purely a military affair and, except for a few outstanding incidents, dull to boot. Spain's condition was itself no better than France's as in addition to her own "fronde" and fighting in Italy she was still battling the revolt in Portugal and the French-backed Catalan Revolt. The Spanish focused their main efforts on recovering the Principality of Catalonia and various Italian territories for strategic reasons; this helped the Portuguese to consolidate their rebellion.

In Italy, the war along the border between Piedmont and the Spanish-held Duchy of Milan continued. Twice, in 1647–1649 and 1655–1659, France managed to open a second front against Milan by gaining the alliance of Francesco I d'Este, Duke of Modena, but this never achieved the desired result of breaking the Spanish defence. In the south, the Neapolitan revolt collapsed and the French forces backing it were driven out by the Spanish forces in 1648. Practically every French campaign in Italy during the war was intended to cut the Spanish Road, but all failed.[7]

In Spain, the French, weakened by the Fronde, were unable to hold Catalonia against reconquest by the Spanish forces; the French cause was undermined when the Catalans discovered that the French were even more overbearing than their former Spanish Habsburg masters and many switched their loyalty back to the chastened regime in Madrid. Taking advantage of French divisions, Spanish forces, under Archduke Leopold Wilhelm, sallied forth from the Netherlands on two occasions: the first met a spirited defence assisted by local peasantry; the second successfully seized several northern French forts in February–March 1652. Having lost support from the Catalans, weakened by internal squabbles and threatened by the Spanish from the north once again, the French were obliged to withdraw most of their forces from south of the Pyrenees. The remnants of Catalan resistance and the depleted French forces in Barcelona surrendered to Spanish Habsburg forces in October 1652. The Spanish remained distracted by the Portuguese Restoration War, and although they carried the war north, across the Pyrenees into the old Catalan county of Roussillon, the fighting was desultory and the front stabilised, with the Pyrenees as the effective border.

By 1653 general exhaustion had reached the point that "neither invaders nor defenders were able to gather supplies to enable them to take the field until July. At one moment, near Péronne, Condé had Turenne at a serious disadvantage, but he could not galvanize the Spanish general, Count Fuensaldaña, who was more solicitous to preserve his master's soldiers than to establish Condé as mayor of the palace to the King of France, and the armies drew apart again without fighting. In 1654 the principal incident was the Siege and Relief of Arras. On the night of the August 24–August 25 the lines of circumvallation drawn round that place by the prince were brilliantly stormed by Turenne's army, and Condé won equal credit for his safe withdrawal of the besieging corps under cover of a series of bold cavalry charges led by himself, as usual, sword in hand. 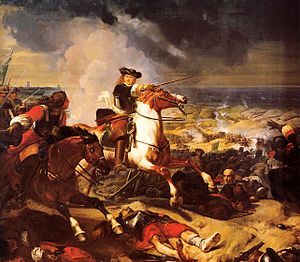 In 1655 Turenne captured the fortresses of Landrecies, Condé and St Ghislain. In 1656 the prince of Condé revenged himself for the defeat of Arras by storming Turenne's circumvallation around Valenciennes (July 16), but Turenne drew off his forces in good order.

Since England was already in war with Spain, an Anglo-French alliance against Spain was established when the Treaty of Paris was signed in March 1657. The campaign of 1657 was uneventful, and is only to be remembered because a body of 3,000 civil war hardened English infantry, sent by Cromwell in pursuance of his treaty of alliance with Mazarin, took part in it. The presence of the English contingent and its very definite purpose of making Dunkirk a new Calais, to be held perpetually by England, gave the next campaign a character of certainty and decision which had been entirely wanting in the latter stages of the war."[8]

Dunkirk was besieged promptly and in great force, and when Don Juan of Austria and Condé appeared with the relieving army from Veurne, Turenne advanced boldly to meet them. The Battle of the Dunes, fought on June 14, 1658, was the first real trial of strength since the Battle of the Faubourg St Antoine. The battle resulted in an Anglo-French triumph over the forces of Spain and Condé. Dunkirk fell and was handed over to England, as had been promised by the French. It would remain under English rule until 1662 and its sale by Charles II to Louis XIV.

A last desultory campaign followed in 1659, which ended when the Spanish repelled French advances in Italy. 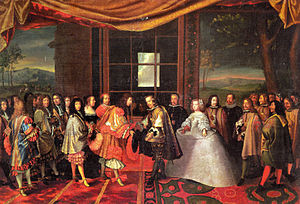 Interview of Louis XIV of France and Philip IV of Spain at the Pheasant Island.

The Peace of the Pyrenees was signed on November 5, 1659. France gained the territories of Artois, Roussillon and smaller areas along its border with the Spanish Netherlands. In return, France agreed to end its support for the breakaway kingdom of Portugal in the Portuguese Restoration War. On January 27, 1660 the Prince de Condé asked and obtained at Aix-en-Provence the forgiveness of Louis XIV. The later careers of Turenne and Condé as great generals were as obedient subjects of their sovereign.