From Infogalactic: the planetary knowledge core
Jump to: navigation, search
For other uses, see Franconia (disambiguation). 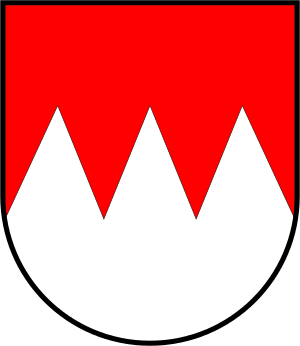 Franconia (German: Franken) is a region in Germany, characterised by its East Franconian culture and dialects. It commonly refers to the eastern part of the historic Franconian stem duchy, mainly represented by the modern Bavarian administrative districts of Lower, Middle, and Upper Franconia. The adjacent northeastern parts of the Heilbronn-Franken region in Baden-Württemberg, parts of Thuringia south of the Rennsteig ridge, and small parts of Hesse also count as Franconian regions. 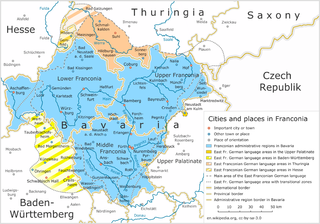 The Franconian lands lie principally in Bavaria, north and south of the winding Main River, which together with the left (southern) Regnitz tributary, including its Rednitz and Pegnitz headstreams, drains most parts of Franconia. Other large rivers include the upper Werra in Thuringia and the Tauber, as well as the upper Jagst and Kocher streams in the west, both right tributaries of the Neckar. In southern Middle Franconia, the Altmühl flows towards the Danube; the Rhine–Main–Danube Canal crosses the European Watershed. The artificial Franconian Lake District has become a popular destination for day-trippers and tourists.

The landscape is characterized by numerous Mittelgebirge ranges of the German Central Uplands. The Western natural border of Franconia is formed by the Spessart and Rhön Mountains, separating it from the former Rhenish Franconian lands around Aschaffenburg (officially part of Lower Franconia), whose inhabitants speak Hessian dialects. To the north rise the Rennsteig ridge of the Thuringian Forest, the Thuringian Highland and the Franconian Forest, the border with the Upper Saxon lands of Thuringia. The Franconian lands include the present-day South Thuringian districts Schmalkalden-Meiningen, Hildburghausen and Sonneberg, the historic Gau of Grabfeld held by the House of Henneberg from the 11th century and later part of the Wettin duchy of Saxe-Meiningen.

In the east, the Fichtelgebirge leads to Vogtland, Bohemian Egerland (Chebsko) in the Czech Republic, and the Bavarian Upper Palatinate. The hills of the Franconian Jura in the south mark the border with the Upper Bavarian region (Altbayern), historic Swabia, and the Danube basin. The northern parts of the Upper Bavarian Eichstätt District, territory of the historic Bishopric of Eichstätt, are also counted as part of Franconia.

In the west, Franconia proper comprises the Tauberfranken region along the Tauber River, which As of   2014[update] is largely part of the Main-Tauber-Kreis in Baden-Württemberg. The state's larger Heilbronn-Franken region also includes the adjacent Hohenlohe and Schwäbisch Hall Districts. In the city of Heilbronn, beyond the Haller Ebene plateau, South Franconian dialects are spoken. Furthermore, in those easternmost parts of the Neckar-Odenwald-Kreis which had formerly belonged to the Bishopric of Würzburg, the inhabitants have preserved a Franconian identity. Franconian areas in East Hesse along Spessart and Rhön comprise Gersfeld and Ehrenberg.

The two largest cities of Franconia are Nuremberg and Würzburg. Though located on the southeastern periphery of the area, the Nuremberg metropolitan area is often identified[by whom?] as the economic and cultural centre of Franconia. Further cities in Bavarian Franconia include Fürth, Erlangen, Bayreuth, Bamberg, Aschaffenburg, Schweinfurt, Hof, Coburg, Ansbach and Schwabach. The major (East) Franconian towns in Baden-Württemberg are Schwäbisch Hall on the Kocher—the Imperial City declared itself "Swabian" in 1442—and Crailsheim on the Jagst River, the main towns in Thuringia are Suhl and Meiningen.

Franconia is named after the Franks, a Germanic tribe who conquered most of Western Europe by the middle of the 8th century. It is likely that Franconia was the homeland of the Franks (indeed in German, Franken is used for both modern day Franconians and the historic Franks). Until the 6th century AD, the region of today's Franconia was probably dominated by Alamanni and Thuringians. After the Frankish triumphs over both tribes around 507 and 529–534, most parts were occupied by the Franks.

Around the 9th century Frankish identity gradually changed from an ethnic identity to a national identity. The original ethnic Franks ceased to be called by others and themselves Franks, whereas certain groups of people who were not Franks but were mostly ruled by Frankish nobility now began to use it as a term to describe their respective land and people. At the beginning of the 10th century a Duchy of Franconia (German: Herzogtum Franken) was established within East Francia, which comprised modern Hesse, Palatinate, parts of Baden-Württemberg and most of today's Franconia. These areas had been dominated and settled by the Burgundians and the Alemanni before being removed and resettled much further south around Switzerland. The vacuum left may have been resettled then by some Frankish nobles with some more or less numerous retainers from their original core area. After the dissolution of the so-called Stem duchy of Franconia, the Holy Roman Emperors created the Franconian Circle (German Fränkischer Reichskreis) in 1500 to embrace the principalities that grew out of the eastern half of the former duchy. The territory of the Franconian Circle roughly corresponds with modern Franconia. The title of a Duke of Franconia was claimed by the Würzburg bishops until 1803 and by the kings of Bavaria until 1918.[1]

Today, only two European regions continue to be associated with the Franks: the French province of Île-de-France, originally the Western Franks' seat of power; and the Ripuarian Frankish dynasty's adopted homeland, modern Franconia.[2] Examples of Franconian cities founded by Frankish noblemen are Würzburg, first mentioned in the 7th century, Ansbach, first mentioned in 748, and Weissenburg, founded in the 7th century.[3] 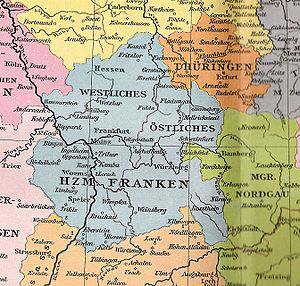 Western and Eastern Franconia, about 1000

East Francia was made up of four stem duchies, one of which was the Duchy of Franconia. The historic duchy of Franconia extended further west to Speyer, Mainz, and Worms (west of the Rhine) than modern day Franconia and even included Frankfurt (ford of the Franks). Sometime around 906, Conrad of the Conradine dynasty succeeded in establishing his ducal hegemony over Franconia. At the failure of the direct Carolingian male line in 911, Conrad was acclaimed King of the Germans, largely because of his weak position in his own duchy. Franconia, like Alamannia was fairly fragmented and the duke's position was often disputed between the chief families.

Conrad had granted Franconia to his brother Eberhard on his succession, but when Eberhard rebelled against Otto I in 938, he was deposed from his duchy. Rather than appoint a new duke from his own circle, Otto now divided the threatening power of the duchy among the great ecclesiastics with and through whom he ruled, and who had remained faithful to his cause: the Bishop of Würzburg and the Abbot of Fulda (939). They were later joined (1008) by a new bishopric erected on former ducal territory, Bamberg.

Thenceforth the great abbeys and episcopal seats that Saint Boniface and his successors had established in southwestern Germany had a monopoly on temporal office in Franconia, on a par with the counts of lands further west. They had another virtue in the Ottonian scheme: as celibates they were less likely to establish hereditary lineages. By contrast, Otto's son-in-law, Conrad the Red, whom he had installed as Duke of Lorraine in 944, extended his power base in Franconia.

In the High Middle Ages, Franconia came to be divided into two distinct regions, though these regions were not coherent territories with distinct governments. Rather, they were culturally different regions which came to be dominated by different political and religious forces and thus came under the de facto "rule" of different bodies.

Rhenish Franconia (Rheinfranken) was the western half of the historic duchy of Franconia, immediately east of the Rhine. This territory however, did not comprise parts of modern Franconia, which is situated further east. Rhenish Franconia was the heartland of the Salian dynasty, which provided four emperors in the 11th and 12th centuries: Conrad II, Henry III, Henry IV, and Henry V. Rhenish Franconia contained the ancient cities of Mainz, Speyer, and Worms, the latter two being countships within the hands of the descendants of Conrad the Red (the Salians). These counts were sometimes referred to informally, on account of the great power in the region, as dukes of Franconia.

In 1115, Henry V awarded the territory of Eastern Franconia (Ostfranken) to his nephew Conrad of Hohenstaufen, who used the title "Duke of Franconia." Franconia remained a Hohenstaufen power base until 1168, when the Bishop of Würzburg was formally ceded the ducal rights in Eastern Franconia. The name "Franconia" fell out of usage, but in 1500 the Franconian Circle was created. Also the bishop of Würzburg had revived it in his own favour in 1442 and held it until the reforms of Napoleon Bonaparte abolished it. The Bishop of Würzburg was more properly the Duke in Franconia (Herzog in Franken) rather than the Duke of Franconia (Herzog von Franken) during this time although both titles were used.

As of the 13th century, the following states, among others, had formed in the territory of the former Duchy:

Most of modern day Franconia became part of Bavaria in 1803 thanks to Bavaria's alliance with Napoleon. Culturally it is in many ways different from Bavaria proper ("Altbayern", Old Bavaria), however. The ancient name was resurrected in 1837 by Ludwig I of Bavaria. During the Nazi period, Bavaria was broken up into several different Gaue, including Franconia and Main-Franconia.

A large part of the population of Franconia consider themselves Franconians (Franken, in German homonymous with the name of the historical Franks), a sub-ethnic group of the German people alongside Alemanni, Swabians, Bavarians, Thuringians and Saxons. Such an ethnic identity is generally not shared by other parts of the Franconian-speaking area (members of which may identify as Rhine-Franconians (Rheinfranken) and Moselle-Franconians (Moselfranken)).

The Free State of Bavaria counts Franconians as one of the "four tribes of Bavaria" (vier Stämme Bayerns), alongside Bavarians, Swabians and Sudeten Germans.[4]

East Franconian German, the dialect spoken in Franconia, is very different from the Austro-Bavarian dialect. Most Franconians do not call themselves Bavarians, but their insistence on this point is generally a lighthearted matter in modern times. In fact, Franconians will most likely take umbrage at insults directed at Bavaria. Even though there is no Franconian state, red and white are regarded as the state colours (Landesfarben) of Franconia.