Brangwyn was an artistic jack-of-all-trades. As well as paintings and drawings, he produced designs for stained glass, furniture, ceramics, table glassware, buildings and interiors, was a lithographer and woodcutter and was a book illustrator. It has been estimated that during his lifetime Brangwyn produced over 12,000 works. His mural commissions would cover over 22,000 sq ft (2,000 m2) of canvas, he painted over 1,000 oils, over 660 mixed media works (watercolours, gouache), over 500 etchings, about 400 wood engravings and woodcuts, 280 lithographs, 40 architectural and interior designs, 230 designs for items of furniture and 20 stained glass panels and windows. Brangwyn received some artistic training, probably from his father, and later from Arthur Heygate Mackmurdo and in the workshops of William Morris, but he was largely an autodidact without a formal artistic education. When, at the age of seventeen, one of his paintings was accepted at the Royal Academy Summer Exhibition, he was strengthened in his conviction to become an artist. Initially he painted traditional subjects about the sea and life on the seas. His 1890 canvas, Funeral At Sea won a medal of the third class at the 1891 Paris Salon.[1] The murals for which Brangwyn was famous, and during his lifetime he was very famous indeed, were brightly coloured and crowded with details of plants and animals, although they became flatter and less flamboyant later in his life.[2] 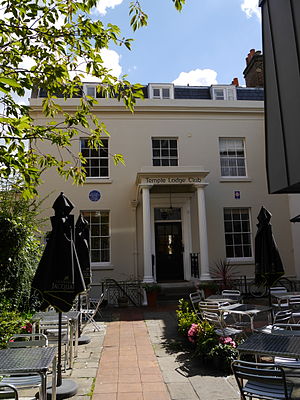 Frank Brangwyn was born in Bruges, Belgium where his father, William Curtis Brangwyn, moved after winning a competition organised by the Belgian Guild of St Thomas and St Luke to design a parish church. His forenames were registered as Guillaume François. In Bruges his father maintained a large workshop with several staff and worked on numerious civic projects as well as the parish church. William Curtis Brangwyn was born in Buckinghamshire to a Welsh family and married Eleanor Griffiths, who was from Brecon.[3] In 1874 the family moved back to the United Kingdom where William Curtis Brangwyn established a successful design practice. Frank Brangwyn attended Westminster City School but often played traunt to spend time in his father's workshop or drawing in the South Kensington Museum. Through contacts made at the Museum, among them Arthur Heygate Mackmurdo, he obtained an apprenticeship with William Morris for whom he worked first as a glazer before undertaking embroidery and wallpaper work.[3]

At the age of seventeen, one of Brangwyn paintings was accepted, and then sold to a shipowner, at the Royal Academy Summer Exhibition, which strengthened him in his conviction to become an artist. Brangwyn joined the Royal Navy Volunteer Reserve and began painting seascapes. He convinced the shipowner who had bought his Royal Academy picture to let him sail on a freighter to Istanbul.[3] This trip provided Brangwyn with the material for several notable paintings. Whereas Funeral at Sea, which won a medal at the Paris Salon in 1891 was mostly composed in grey, The Golden Horn, Constantinople was much brighter and full of colour. Although Brangwyn held his first one man show in London in 1891, he spent most of that year and 1890 at sea, visiting Spain several times as well as returning to Istanbul and travelling to South Africa and Zanzibar.[3] Soon Brangwyn was attracted by the light and the bright colours of these southern countries at a time when Orientalism was becoming a favoured theme for many painters. He made many paintings and drawings, particularly of Spain, Egypt, Turkey and Morocco, which he visited in 1893. This lightened his palette, a change that initially did not find critical favor but helped establish his international reputation. In 1895 the French government purchased his painting Market in Morocco.[4]

In 1895, the Parisian art dealer Siegfried Bing commissioned Brangwyn to decorate the exterior of his Galerie L'Art Nouveau, and encouraged Brangwyn into new avenues: murals, tapestry, carpet designs, posters and designs for stained glass to be produced by Louis Comfort Tiffany. In 1917 he collaborated with the Japanese artist Urushibara Mokuchu on a series of woodblock prints.[5] For his austere but decorative designs he was recognized by continental and American critics as a prominent artist, while British critics were puzzled as how to evaluate him.

Brangwyn had an affair with Ellen Kate Chesterfield, which produced a son, James Barron Chesterfield-Brangwyn, born 1885 in Mevagissey, Cornwall. James later emigrated to Australia in 1909, initially working on a farm in Townsville, Queensland and later moving to Brisbane. In 1896, Brangwyn married Lucy Ray, a nurse, who died in 1924. They had no children. He leased Temple Lodge, 51 Queen Caroline Street, Hammersmith, London from 1900 to 1937/38 and bought The Jointure, Ditchling, Sussex in 1918.

In 1908 Brangwyn was commissioned to paint the apse of St Aidan's Church, Leeds, but after it was realised that the air pollution would damage the paint, it was agreed he should work in glass mosaic. The mosaic (using Rust's vitreous mosaic) was completed in 1916. It covers the whole apse, and shows the life of St Aidan.[6][7]

Along with Diego Rivera and Josep Maria Sert, he was chosen by John D. Rockefeller, Jr. to decorate the concourse of the RCA Building in New York City (1930–34) with murals. A sequence of large murals on canvas (originally from Horton House, Northamptonshire) is held by the Dunedin Public Art Gallery, Dunedin, New Zealand and the Museum of New Zealand Te Papa Tongarewa in Wellington. He was also chosen to decorate the first class dining room of the Canadian Pacific liner, RMS Empress of Britain (1930–1931)].

Although Brangwyn produced more than 80 poster designs during the First World War, he was not an official war artist.[9] He donated most of these poster designs to charities such as the Red Cross, the Belgian and Allied Aid League, the Royal National Institute for the Blind and L'Orphelinat des Armees, an American charity supporting a French orphanage.[10] His grim poster of a Tommy bayoneting an enemy soldier (Put Strength in the Final Blow: Buy War Bonds) caused deep offence in both Britain and Germany. The Kaiser himself is said to have put a price on Brangwyn’s head after seeing the image.[11] In 1917 Brangwyn produced six lithographs under the title Making Sailors and one entitled The Freedom of the Seas for the Ministry of Information's Britain's Efforts and Ideals portfolio of images which were exhibited in Britain and abroad and were also sold as prints to raise money for the war effort.[12][13] Brangwyn was the Chairman of the English Committee for Dixmude. Dixmude, near Ostend that had been the site of heavy fighting throughout the war. To aid its reconstruction, Brangwyn donated a series of woodcuts to the town on the theme of the Tragedy of Dixmude.[10] During the war Brangwyn created a number of propaganda images highlighting atrocities committed aganst Belgium.[10]

In 1926 Brangwyn was commissioned by Lord Iveagh to paint a pair of large canvases for the Royal Gallery at the House of Lords at Westminster to commerorate those peers and their family members who had been killed in the war. Brangwyn painted two battle scenes which included life-size images of troops advancing into battle alongside a British tank. The Lords regarded the panels as too grim and disturbing and, in 1928, refused to accept them. Instead they commissioned Brangwyn to produce a series celebrating the beauty of the British Empire and the Dominions to fill the Royal Gallery. Known as the British Empire Panels Brangwyn spent a further five years producing 16 large works that cover 3,000 sq ft (280 m2).[14] However after five of the panels were displayed in the Royal Gallery for approvial by the Lords, the peers refused to accept them because they were "too colourful and lively" for the location.[15] In 1934 the 16 panels were purchased by Swansea Council and are now housed in the Brangwyn Hall, Swansea.[16][17] 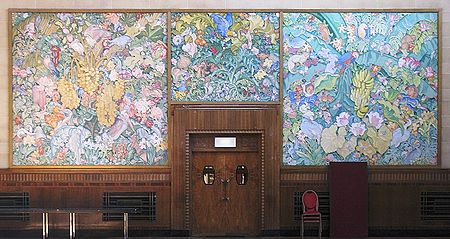 The rejection of the Panels by the Lords caused a lasting depression in Brangwyn. He became increasingly pessimistic and a hypochondriac and began disposing of his possessions during the 1930s.[3] Brangwyn donated many of his own and other artworks to museums and galleries in Britain and Europe including The British Museum and the William Morris Gallery.[18] In 1936 he presented Bruges with over 400 works, now in the Arents House Museum. In return Bruges made him Citoyen d'Honneur de Bruges, only the third time the award had been given.[19] The two battle scenes rejected by the House of Lords were donated to the National Museum Wales as part of a large group of gifts he made to the Museum between 1929 and 1935. Brangwyn specified precisely where in the Museum's Main Hall the works were to be hung and they remain there today.[15] In 1944, he recovered and secured designs by Frederic Shields for the Chapel of the Ascension built by Herbert Horne, which was destroyed in 1940 during the London Blitz. In 1950, one of his last works provided illustrations for the book Sixty Years of Yachts by Herbert Julyan, a good friend.

The art writer Marius Gombrich links the decline of interest in Brangwyn's works to the decline of the British Empire, pointing out that Brangwyn's bold, vigorous, outward-looking art was suited to the expansive spirit of late-Victorian British society—but inconsistent with the inward-looking, less confident, and intellectually effete ethos prevalent in the post World War I period.[24]