Born in Oxford, New Jersey, Schoonover studied under Howard Pyle at the Drexel Institute in Philadelphia and became part of what would be known as the Brandywine School. A prolific contributor to books and magazines during the early twentieth century, the so-called "Golden Age of Illustration", he illustrated stories as diverse as Clarence Mulford's Hopalong Cassidy stories and Edgar Rice Burroughs's A Princess of Mars. In 1918 and 1919, he produced a series of paintings along with Gayle Porter Hoskins illustrating the American forces in the First World War for a series of souvenir prints published in the Ladies Home Journal. Schoonover helped to organize what is now the Delaware Art Museum and was chairman of the fundraising committee charged with acquiring works by Howard Pyle. In his later years he restored paintings including some by Pyle and turned to easel paintings of the Brandywine and Delaware landscapes. He also gave art lessons, established a small art school in his studio, designed stain glass windows, and dabbled in science fiction art (illustrating Edgar Rice Burroughs’ A Princess of Mars), he was known locally as the “Dean of Delaware Artists.” Schoonover died at 94, leaving behind more than two thousand illustrations. 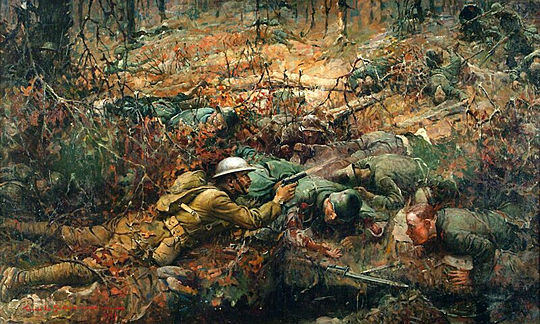 Schoonover’s name received national attention in 2011 when his painting of World War I hero Alvin C. York was returned to York’s home state of Tennessee. Businessman and philanthropist Allan Jones of Cleveland, TN purchased the painting on Veteran’s Day from the Blakeslee Gallery in Wellington, Florida.

Jones said, "When I learned that Mr. Blakeslee would consider selling the painting to the right buyer, I felt it was essential to bring this piece back to its rightful home in Tennessee and have the painting here on Veterans Day 11-11-11."

Prior to being acquired by Jones, the painting was on loan to the 82nd Airborne Division War Memorial Museum.