Frank Frazetta (born Frank Frazzetta; February 9, 1928 – May 10, 2010)[2][3] was an American fantasy and science fiction artist, noted for comic books, paperback book covers, paintings, posters, LP record album covers and other media.[2] He was the subject of a 2003 documentary.

Born Frank Frazzetta in Brooklyn, New York City, he removed one "z" from his last name early in his career to make his name seem less "clumsy".[2] The only boy among four children, he spent much time with his grandmother, who began encouraging him in art when he was two years old, he recalled in 2010, a month before his death.

When I drew something, she would be the one to say it was wonderful and would give me a penny to keep going. Sometimes I had nothing left to draw on but toilet paper. As I got older, I started drawing some pretty wild things for my age. I remember the teachers were always mesmerized by what I was doing, so it was hard to learn anything from them. So I went to art school when I was a little kid, and even there the teachers were flipping out.[4]

At age eight, Frazetta attended the Brooklyn Academy of Fine Arts,[5] a small art school run by instructor Michel Falanga. "[H]e didn't teach me anything, really," Frazetta said in 1994. "He'd come and see where I was working, and he might say, 'Very nice, very nice. But perhaps if you did this or that.' But that's about it. We never had any great conversations. He spoke very broken English. He kind of left you on your own. I learned more from my friends there."[6]

In 1944, at age 16, Frazetta, who had "always had this urge to be doing comic books",[6] began working in comics artist Bernard Baily's studio doing pencil clean-ups.[5] His first comic-book work was inking the eight-page story "Snowman", penciled by John Giunta, in the one-shot Tally-Ho Comics (Dec. 1944), published by Swappers Quarterly and Almanac/Baily Publishing Company.[7] It was not standard practice in comic books during this period to provide complete credits, so a comprehensive listing of Frazetta's work is difficult to ascertain. His next confirmed comics works are two signed penciled-and-inked pieces in Prize Comics' Treasure Comics #7 (July 1946): the four-page "To William Penn founder of Philadelphia..." and the single page "Ahoy! Enemy Ship!", featuring his character Capt. Kidd Jr.[8] In a 1991 interview in The Comics Journal, Frazetta credited Graham Ingels as the first one in the comic book industry to recognize his talent, and to give him jobs at Standard Comics in 1947. These included stints on Louie Lazybones, a series which was a blatant rip-off of the successful newspaper strip Li'l Abner, which Frazetta would be ghosting later in his career.

Frazetta was soon drawing comic books in many genres, including Westerns, fantasy, mystery, and historical drama. Some of his earliest work was in funny animal comics, which he signed as "Fritz".[citation needed] For Dell's subsidiary company, Famous Funnies, Frazetta did war and human interest stories for Heroic Comics, as well as one pagers extolling the virtues of prayer and the evils of drug abuse. In comics like Personal Love and Movie Love, he did romance and celebrity stories, including a biography of Burt Lancaster.

In the early 1950s, he worked for EC Comics, National Comics (including the superhero feature "Shining Knight"), Avon Comics, and several other comic book companies. Much of his work in comic books was done in collaboration with friend Al Williamson and occasionally his mentor[citation needed] Roy G. Krenkel.

Noticed because of his work on the Buck Rogers covers for Famous Funnies,[9] Frazetta started working with Al Capp on Capp's comic strip Li'l Abner. Frazetta was also producing his own strip, Johnny Comet at this time, as well as assisting Dan Barry on the Flash Gordon daily strip.[10]

In 1961, after nine years with Capp, Frazetta returned to comic books. He also helped Harvey Kurtzman and Will Elder on three stories of the bawdy parody strip Little Annie Fanny in Playboy magazine.[11]

In 1964, Frazetta's painting of Beatle Ringo Starr for a Mad magazine ad parody caught the eye of United Artists studios. He was approached to do the movie poster for What's New Pussycat?, and earned the equivalent of his yearly salary in one afternoon.[12] He did several other movie posters.

Frazetta also produced paintings for paperback editions of adventure books. His interpretation of Conan visually redefined the genre of sword and sorcery, and had an enormous influence on succeeding generations of artists.[13] From this point on, Frazetta's work was in great demand. His covers were used for other paperback editions of classic Edgar Rice Burroughs books, such as those from the Tarzan and Barsoom (John Carter of Mars) series. He also did several pen and ink illustrations for many of these books. His cover art only coincidentally matched the storylines inside the books, as Frazetta once explained: "I didn't read any of it... I drew him my way. It was really rugged. And it caught on. I didn't care about what people thought. People who bought the books never complained about it. They probably didn't read them."[14]

After this time, most of Frazetta's work was commercial in nature, including paintings and illustrations for movie posters, book jackets, and calendars. Primarily, these were in oil, but he also worked with watercolor, ink, and pencil alone.[15] Frazetta's work in comics during this time were cover paintings and a few comic stories in black and white for the Warren Publishing horror and war magazines Creepy, Eerie, Blazing Combat and Vampirella.[12]

Once Frazetta secured a reputation, movie studios lured him to work on animated movies. Most, however, would give him participation in name only, with creative control held by others.[citation needed] An advertisement based on his work was animated by Richard Williams in grease pencil and paint and shown in 1978.[16] In the early 1980s, Frazetta worked with producer Ralph Bakshi on the feature Fire and Ice, released in 1983. The realism of the animation and design replicated Frazetta's artwork.[17] Bakshi and Frazetta were heavily involved in the production of the live-action sequences used for the film's rotoscoped animation, from casting sessions to the final shoot.[17] Following the release of the film, Frazetta returned to his roots in painting and pen-and-ink illustrations.

Frazetta retained the original Conan paintings, and long refused to part with them. Many were displayed at the Frazetta Museum in East Stroudsburg, Pennsylvania. In 2009, Frazetta's "Conan the Conqueror" painting, the first to be offered for sale, was purchased for $1 million.[14]

In the early 1980s, Frazetta created a gallery, Frazetta's Fantasy Corner, on the upper floors of a former Masonic building at the corner of South Courtland and Washington streets in East Stroudsburg, Pennsylvania. The building also housed a Frazetta art museum that displayed both his own work and, in a separate gallery, that of other artists.[19] From 1998 to 1999, Frank Frazetta Fantasy Illustrated magazine was published by Quantum Cat Entertainment; with cover art & some illustrations by Frazetta.[20] In his later life, Frazetta was plagued by a variety of health problems, including a thyroid condition that went untreated for many years. A series of strokes left his right arm almost completely paralyzed. He taught himself to paint and draw with his left hand. He was the subject of the 2003 feature documentary Frank Frazetta: Painting With Fire.

On December 9, 2009, Frazetta's son, Alfonso Frank Frazetta, 52, known as Frank Jr., was arrested for attempting to steal approximately 90 paintings from the Frazetta museum.[21] He was accompanied by Frank Bush, 49, and Kevin Clement, 54.[21] His wife, Lori Frazetta, told state police that Frank Jr. and Ellie had run the family business until Ellie's death, when infighting over the paintings began.[21] The son maintains he was trying to prevent the paintings from being sold, per the wishes of his father, who he says had given him power of attorney over his estate.[23] After siblings Billy Frazetta, Holly Frazetta Taylor, and Heidi Grabin filed a lawsuit against Frank Jr. in March 2010, claiming misappropriation of their father's work, which they said the artist had transferred to a company controlled by those three, the family issued a statement on April 23, 2010, that said, "all of the litigation surrounding his family and his art has been resolved. All of Frank's children will now be working together as a team to promote his ... collection of images...."[24] The Monroe County district attorney later that day said he would drop theft and burglary charges against Frazetta Jr. at the request of family members.[24] 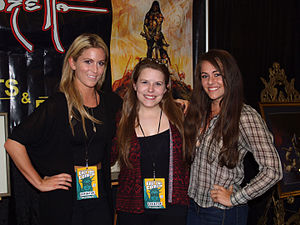 Frazetta has influenced many artists within the genres of fantasy and science fiction. Yusuke Nakano, a lead artist for Nintendo's Legend of Zelda series, cites Frazetta as an influence.[25] Fantasy artist and musician Joseph Vargo cites Frazetta as a primary influence, and his art calendars since 1998 mark Frazetta's birthday.[26] Chris Perna, art director at Epic Games, stated in an interview in 2011 that Frazetta was one of his influences.[27] Other artists influenced by Frazetta include comics artist such as Marc Silvestri[28] and Shelby Robertson.[29]

The face and bodypaint of professional wrestler Kamala was copied, by artist and wrestler Jerry Lawler, from a character in a Frazetta painting.[30]