Frank Robinson (born August 31, 1935) is an American former Major League Baseball outfielder and manager. He played for five teams from 1956 to 1976, and became the only player to win league MVP honors in both the National and American Leagues.[1] He won the Triple crown, was a member of two teams that won the World Series (the 1966 and 1970 Baltimore Orioles), and amassed the fourth-most career home runs at the time of his retirement (he is currently ninth). Robinson was elected to the Baseball Hall of Fame in 1982.

Robinson was the first African-American hired to serve as manager in Major League history. He managed the Cleveland Indians during the last two years of his playing career, compiling a 186–189 record. He went on to manage the San Francisco Giants, the Baltimore Orioles, and the Montreal Expos/Washington Nationals. Currently he is the honorary President of the American League.

Robinson attended McClymonds High School in Oakland, California, where he was a basketball teammate of Bill Russell. He was a baseball teammate of Vada Pinson and Curt Flood.[2] While playing for the Reds in the late 1950s, he attended Xavier University in Cincinnati during the off-season.[3] 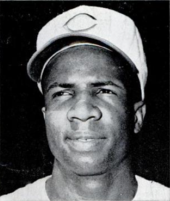 Robinson had a long and successful playing career. Unusual for a star in the era before free agency, he split his best years between two teams: the Cincinnati Reds (1956–65) and the Baltimore Orioles (1966–71). The later years of his career were spent with the Los Angeles Dodgers (1972), California Angels (1973–74) and Cleveland Indians (1974–76). He is the only player to be named Most Valuable Player in both leagues, in 1961 with the Reds and again in 1966 with the Orioles.

Robinson practiced a gutsy batting style, crowding the plate perhaps more than any other player of his time, and experienced many knockdowns. Asked by an announcer what his solution to the problem was, he answered simply, "Just stand up and lambast the next pitch", which he often did.

Prior to the 1966 season, Reds owner Bill DeWitt sent Robinson to Baltimore in exchange for pitcher Milt Pappas, pitcher Jack Baldschun and outfielder Dick Simpson. The trade is now considered among the most lopsided deals in baseball history, especially as Robinson was only 30 years old and appeared to have many productive years ahead of him. DeWitt attempted to downplay this fact and defend the deal to skeptical Reds fans by famously referring to Robinson as "not a young 30."[4] It forever tarnished Dewitt's legacy, and outrage over the deal made it difficult for Pappas to adjust to pitching in Cincinnati (he was traded out of town after only three seasons). There were also rumors that Robinson did not get along well with teammate Vada Pinson. In Robinson's first year in Baltimore, he won the Triple Crown, leading the American League with a .316 batting average (the lowest ever by a Triple crown winner), 49 home runs (the most ever by a right-handed Triple crown winner) and 122 runs batted in. On May 8, 1966, Robinson became the only player ever to hit a home run completely out of Memorial Stadium. The shot came off Luis Tiant in the second game of a doubleheader against the Cleveland Indians. Until the Orioles' move to Camden Yards in 1991, a flag labeled "HERE" was flown at the spot where the ball left the stadium.

The Orioles won the 1966 World Series and Robinson was named the Series MVP. In the Orioles' four-game sweep of the defending champion Los Angeles Dodgers, Robinson hit two home runs—in Game One, which Baltimore won 5–2, and in Game Four, the only run of the game in a 1–0 series-clinching victory. Both home runs were hit off Don Drysdale.

It was in Baltimore that he first became active in the civil rights movement. He originally declined membership in the NAACP unless the organization promised not to make him do public appearances. However, after witnessing Baltimore's segregated housing and discriminatory real estate practices, he changed his mind and became an enthusiastic speaker on racial issues.[5]

On June 26, 1970, Robinson hit back-to-back grand slams (in the fifth and sixth innings) in the Orioles' 12–2 victory over the Washington Senators at RFK Stadium. The same runners were on base on both home runs—Dave McNally on third, Don Buford on second and Paul Blair on first.

The Orioles won three consecutive pennants between 1969 and 1971, and won the 1970 World Series over his old club Cincinnati.

Robinson finished his playing career with brief appearances for the Los Angeles Dodgers, California Angels (where he became their first DH and was again team mates with Vada Pinson) and Cleveland Indians.

Robinson managed in the winter leagues late in his playing career. By the early 1970s, he had his heart set on becoming the first black manager in the majors; the Angels traded him to the Cleveland Indians midway through the 1974 season due to his open campaigning for the manager's job.

In 1975, the Indians named him player-manager, giving him distinction of being the first black manager in the Majors.[5] In his first at bat as player/manager of the Indians, he homered at Cleveland Stadium off Yankees pitcher Doc Medich.

He was awarded the American League Manager of the Year Award in 1989 for leading the Orioles to an 87–75 record, a turnaround from their previous season in which they went 54–107. After Robinson had spent some years known in baseball as the Director of Discipline, he was chosen by Major League Baseball in 2002 to manage the Expos, which MLB owned at that time. The 2002 Expos performed surprisingly well, finishing second in the NL East, and posting a 19-game improvement over 2001.

In 2005, the Montreal Gazette's Stephanie Myles reported that Robinson had devoted much time playing golf during his years in Montreal, sometimes spending 16-hour days between the course and the games at night. Some journalists have questioned his disregard of statistics to determine pitching match-ups with his hitting line-ups. Robinson defended his style of managing by saying that he goes by his "gut feeling".

In a June 2005 Sports Illustrated poll of 450 MLB players, Robinson was selected the worst manager in baseball, along with Buck Showalter, then manager of the Texas Rangers. In the August 2006 poll, he again was voted worst manager with 17% of the vote and 37.7% of the NL East vote.[7]

In 2005, one of Robinson's Nationals players asked him if he had ever played in the majors. This was reported on Real Sports with Bryant Gumbel as an illustration of how little some current players are aware of the history of the game.

During a game against the Houston Astros on May 25, 2006, Robinson pulled Nationals catcher Matt LeCroy during the middle of the seventh inning, violating an unwritten rule that managers do not remove position players in the middle of an inning. Instead, managers are supposed to discreetly switch position players in between innings. However, LeCroy, the third-string catcher, had allowed Houston Astros baserunners to steal seven bases over seven innings and had committed two throwing errors. Although the Nationals won the game 8–5, Robinson found the decision so difficult to make on a player he respected so much, he broke down crying during the post-game interviews.[10]

On September 30, 2006, the Nationals' management declined to renew Robinson's contract for the 2007 season, though they stated he was welcome to come to spring training in an unspecified role. Robinson, who wanted either a front office job or a consultancy, declined.[11] On October 1, 2006, he managed his final game, a 6–2 loss to the Mets, and prior to the game addressed the fans at RFK Stadium.[12] 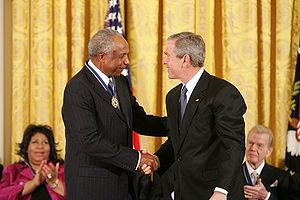 Robinson being awarded the Presidential Medal of Freedom

In 1999, he ranked Number 22 on The Sporting News list of the 100 Greatest Baseball Players, and was nominated as a finalist for the Major League Baseball All-Century Team.

He was awarded the Presidential Medal of Freedom on November 9, 2005, by President George W. Bush.[15] On April 13, 2007 Robinson was awarded the first Jackie Robinson Society Community Recognition Award at George Washington University.[16]

In his career, he held several major league records. In his rookie season, he tied Wally Berger's record for home runs by a rookie (38).[5] (The current record would be set by Mark McGwire in 1987.) Robinson still holds the record for home runs on opening day (8), which includes a home run in his first at bat as a player-manager.[17] Robinson won the American League Triple Crown (.316 BA, 49 HR, 122 RBI) – only two players (Carl Yastrzemski and Miguel Cabrera) have since won the award in either league – and the two MVP awards, which made him the first player in baseball history to earn the title in both leagues. 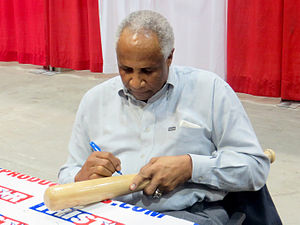 Robinson first served in the MLB front office as Vice President of On-Field Operations from 1999 to 2002, responsible for player discipline, uniform policy, stadium configuration, and other on-field issues.[18]

Robinson served as an analyst for ESPN during 2007 Spring Training.[19] The Nationals offered to honor Robinson during a May 20 game against his former club the Baltimore Orioles but he refused.[20]