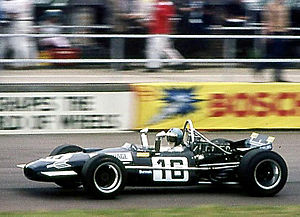 Not to be confused with current Formula One team Williams Grand Prix Engineering, formed by Frank Williams and Patrick Head in 1977

Frank Williams Racing Cars was a British Formula One team and constructor.

Frank Williams had been a motor-racing enthusiast since a young age, and after a career in saloon cars and Formula Three, backed by Williams' shrewd instincts as a dealer in racing cars and spares, he realised he'd reached his peak as a driver and started entering other drivers, in particular his friend and sometime flatmate Piers Courage. After Williams backed Courage in a successful 1968 Formula Two season, he purchased a Brabham Formula One car for Courage in 1969. This allegedly angered Jack Brabham, as the car had been sold to Williams with the expectation that it would be used in the Tasman Series and then converted to Formula 5000. Courage in fact had a great year, taking second place at both the Monaco and US Grands Prix.

Their efforts attracted the interest of Italian sports car manufacturer De Tomaso, who built a Formula One chassis (designed by Gian Paolo Dallara) for the 1970 season. However, the car was initially uncompetitive, failing to finish the first four races of the year. In the fifth, the Dutch Grand Prix, the De Tomaso 505/38 flipped and caught fire, killing Courage. The death of his friend seriously upset Williams; the subsequent distance the team principal placed between himself and his drivers has been attributed to this event. The team soldiered on, however, first with Brian Redman, then with Tim Schenken. With no results, the partnership with De Tomaso was dissolved.

For 1971, Williams purchased a year-old March 701, and ran Frenchman Henri Pescarolo. The team later upgraded to a new March 711, but results were difficult to come by. The old car was also entered for Max Jean at the French Grand Prix. After the success of 1969, Williams was now low on funds, living a hand-to-mouth existence from race to race. Pescarolo did, however, keep the outfit ticking over with fourth place at the British Grand Prix and sixth in Austria.

French oil company Motul came on board for the 1972 season, enabling Williams to buy a new March 721 for Pescarolo,[1] while backing from Italian toy manufacturer Politoys provided money to build an in-house chassis. From the (non-Championship) Brazilian Grand Prix, Carlos Pace was entered in the previous year's March 711, later taking fifth at the Belgian Grand Prix.

The Len Bailey-designed Politoys FX3 was a conventional Cosworth-engined car with a Hewland FG400 gearbox. It debuted in the hands of Pescarolo at the British Grand Prix, but the steering failed and the car was heavily damaged.[2] Pescarolo switched back to his March 721 while the Politoys was rebuilt. In its last appearance as the Politoys FX3, Chris Amon drove the car for the team in the end of season non-Championship 1972 World Championship Victory Race at Brands Hatch, but qualified only 20th and retired with engine failure.[3]

Motul and Politoys both withdrew their backing at the end of 1972, but Williams managed to attract backing from cigarette giant Marlboro and Italian sports car manufacturer Iso Autoveicoli S.p.A. for the 1973 season. The Politoys FX3 was reworked as the Iso-Marlboro FX3B and a second car was built. Two new drivers were signed, New Zealand's Howden Ganley and Italy's Nanni Galli.

At the first race in Argentina, Galli qualified 16th with Ganley 19th and last on the grid. Galli's engine failed on the first lap, but Ganley finished the race, although he was not classified due to being 17 laps adrift of the winner.[4] The team fared better in Brazil with Ganley finishing seventh and Galli ninth.[5] Galli was then injured testing a sports car and replaced for the following race in South Africa by local driver Jackie Pretorius. Pretorius retired his FX3B at half-distance with overheating problems, but Ganley managed tenth, albeit six laps down.[6]

The FX3B had become obsolete by this time due to new deformable structure regulations and was replaced by the new Iso-Marlboro IR. However, the FX3B was raced in two non-Championship races at this time; at the 1973 Race of Champions, Tony Trimmer raced an FX3B to fourth place while Ganley retired his car with handling problems.[7] The New Zealander also retired at the FX3B's last race, the 1973 BRDC International Trophy, this time with low oil pressure.[8] 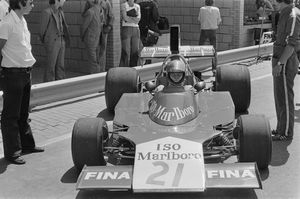 Introduced at the 1973 Spanish Grand Prix, the Iso-Marlboro IR was driven by eight different drivers during the rest of the 1973 season. Ganley was the only regular driver and he scored a point with the car at the Canadian Grand Prix towards the end of the season. Of the other drivers; Galli, Pescarolo, Tom Belsø, Graham McRae, Gijs van Lennep, Tim Schenken and Jacky Ickx, only van Lennep was able to score a point, at his home race in the Netherlands.[9]

Both Iso Rivolta and Marlboro left before the 1974 season, leaving Williams with financial problems. The two IR chassis were retained, now re-designated the FW after Frank Williams, but initially only a single car was entered for Arturo Merzario, who had replaced Ganley as the team's number one driver. There was an early-season boost as Merzario placed sixth in the third race of the season in South Africa,[10] but when the second car was reintroduced, the string of paydrivers employed to drive it produced little in the way of results. After three non-qualifications, Jacques Laffite was brought in to partner Merzario and performances gradually improved, culminating in a fourth-place finish for Merzario in Italy.[11] This gave the team a total of four points, and another tenth-place finish in the Constructors' Championship. Three Iso-Marlboro FW chassis were ultimately used during 1974, including a newly built car, and these were renamed Williams FW01, FW02 and FW03 for 1975; separate designations despite the three cars being essentially the same.[12]

Merzario and Laffite stayed on for the start of the 1975 season as the team continued to use the FW02 and FW03. The new FW04 replaced the FW02 at the Spanish Grand Prix, and promising British youngster Tony Brise substituted for Laffite, finishing just outside the points in seventh. By this time, however, the team's money problems had become serious,[13] and Merzario left following the Belgian Grand Prix, his place taken for the rest of the season by six different paying drivers – Ian Scheckter, François Migault, Ian Ashley, Jo Vonlanthen, Renzo Zorzi and Lella Lombardi. Northern Ireland's Damien Magee, meanwhile, substituted for Laffite in Sweden.

A major shock came in Germany when a mixture of attrition and tenacious driving saw Laffite take the FW04 to second place behind the Brabham of Carlos Reutemann, bringing much-needed financial aid to a team on the point of collapse. This was to be the team's only points finish of the season, but they improved their position in the Constructors' Championship by one place, to ninth.

At the start of the 1976 season, Canadian oil millionaire Walter Wolf bought 60% of Frank Williams Racing Cars. However, Frank Williams was retained as team manager. The team inherited the 308C car used by Hesketh Racing during the final races of 1975, rebranding it as the Wolf-Williams FW05, and took Jacky Ickx back as lead driver. However, the car turned out to be overweight[14] and Ickx qualified in only four races, with a best result of seventh in the Spanish Grand Prix, before he was fired and replaced by the returning Merzario. A second car was raced during the first half of the season by Frenchman Michel Leclère.

At season's end, Wolf decided to restructure the team, removing Frank Williams from the manager's job. Disillusioned, Williams left the team altogether, to set up Williams Grand Prix Engineering with Patrick Head in 1977.