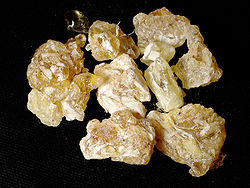 Frankincense, also called olibanum, is an aromatic resin used in incense and perfumes, obtained from trees of the genus Boswellia in the family Burseraceae, particularly Boswellia sacra (syn: B. bhaw-dajiana), B. carterii33, B. frereana, B. serrata (B. thurifera, Indian frankincense), and B. papyrifera. The English word is derived from Old French "franc encens" (i.e., high quality incense).[1]

There are four main species of Boswellia that produce true frankincense. Resin from each of the four is available in various grades. The grades depend on the time of harvesting; the resin is hand-sorted for quality. 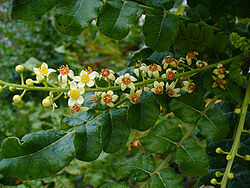 Flowers and branches of the Boswellia sacra tree, the species from which most frankincense is derived

Frankincense is tapped from the scraggy but hardy trees by slashing the bark, which is called striping, and allowing the exuded resin to bleed out and harden. These hardened resins are called tears. There are several species and varieties of frankincense trees, each producing a slightly different type of resin. Differences in soil and climate create even more diversity of the resin, even within the same species. Boswellia sacra trees are considered unusual for their ability to grow in environments so unforgiving that they sometimes grow out of solid rock. The initial means of attachment to the rock is unknown, but is accomplished by a bulbous disk-like swelling of the trunk. This growth prevents it from being ripped from the rock during violent storms. This feature is slight or absent in trees grown in rocky soil or gravel. The trees start producing resin when they are about eight to 10 years old.[2] Tapping is done two to three times a year with the final taps producing the best tears due to their higher aromatic terpene, sesquiterpene and diterpene content. Generally speaking, the more opaque resins are the best quality. Fine resin is produced in Somalia, from which the Roman Catholic Church purchases most of its stock.[3]

Recent studies have indicated that frankincense tree populations are declining, partly due to over-exploitation. Heavily tapped trees produce seeds that germinate at only 16% while seeds of trees that had not been tapped germinate at more than 80%. In addition, burning, grazing, and attacks by the longhorn beetle have reduced the tree population.[4] Conversion (clearing) of frankincense woodlands to agriculture is also a major threat.[5] 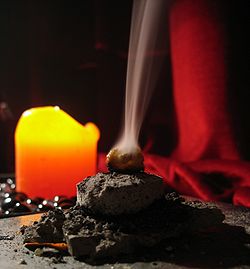 Indirect burning of frankincense on a hot coal

Frankincense has been traded on the Arabian Peninsula and in North Africa for more than 5000 years.[6] A mural depicting sacks of frankincense traded from the Land of Punt adorns the walls of the temple of ancient Egyptian Queen Hatshepsut, who died circa 1458 BC.[7]

Frankincense was one of the consecrated incenses (HaKetoret) described in the Hebrew Bible and Talmud used in Ketoret ceremonies.[8] The frankincense of the Jews, as well as of the Greeks and Romans, is also called Olibanum (from the Hebrew חלבנה). Old Testament references report it in trade from Sheba (Isaiah 60:6 ; Jeremiah 6:20). Frankincense is mentioned in the Song of Solomon (Song of Solomon 4:14).[9]

It was offered on a specialised incense altar in the time when the Tabernacle was located in the First and Second Jerusalem Temples. The ketoret was an important component of the Temple service in Jerusalem. It is mentioned in the Hebrew Bible book of Exodus 30:34, where it is named levonah (lebonah in the Biblical Hebrew), meaning "white" in Hebrew.[8] It was one of the ingredients in the perfume of the sanctuary (Exodus 30:34), and was used as an accompaniment of the meal-offering (Leviticus 2:1, 2:16, 6:15, 24:7). When burnt it emitted a fragrant odour, and the incense was a symbol of the Divine name (Malachi 1:11 ; Song of Solomon 1:3) and an emblem of prayer (Psalm 141:2 ; Luke 1:10 ; Revelation 5:8, 8:3). It was often associated with myrrh (Song of Solomon 3:6, 4:6) and with it was made an offering to the infant Jesus (Matthew 2:11). A specially "pure" kind, lebhonah zakkah, was presented with the showbread (Leviticus 24:7).[9]

Frankincense was reintroduced to Europe by Frankish Crusaders, although its name refers to its quality, not to the Franks themselves.[1] Although it is better known as "frankincense" to westerners, the resin is also known as olibanum, in Arabic al-lubān (roughly translated: "that which results from milking"), a reference to the milky sap tapped from the Boswellia tree. 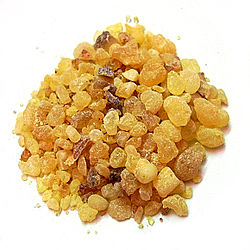 The lost city of Ubar, sometimes identified with Irem in what is now the town of Shisr in Oman, is believed to have been a centre of the frankincense trade along the recently rediscovered "Incense Road". Ubar was rediscovered in the early 1990s and is now under archaeological excavation.

The Greek historian Herodotus was familiar with frankincense and knew it was harvested from trees in southern Arabia. He reported that the gum was dangerous to harvest because of venomous snakes that lived in the trees. He goes on to describe the method used by the Arabs to get around this problem, that being the burning of the gum of the styrax tree whose smoke would drive the snakes away.[10] The resin is also mentioned by Theophrastus and by Pliny the Elder in his Naturalis Historia.

"Ruxiang or xunluxiang comes from the three Dashi countries of Murbat (Maloba), Shihr (Shihe), and Dhofar (Nufa), from the depths of the remotest mountains.[11] The tree which yields this drug may generally be compared to the pine tree. Its trunk is notched with a hatchet, upon which the resin flows out, and, when hardened, turns into incense, which is gathered and made into lumps. It is transported on elephants to the Dashi (on the coast), who then load it upon their ships to exchange it for other commodities in Sanfoqi. This is the reason why it is commonly collected at and known as a product of Sanfoqi."[12] 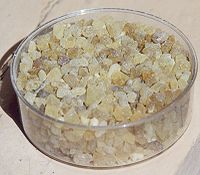 Frankincense comes in many types, and its quality is based on color, purity, aroma, age, and shape. Silver and Hojari are generally considered the highest grades of frankincense.

Currently, there are two dissertations which may enable the identification of a few Olibanum species according to their specific secondary metabolism products.[13][14] 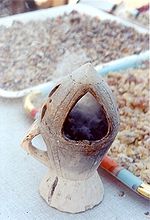 Frankincense is often prepared inside a censer, such as the meerschaum dabqaad traditionally used in Somalia and Djibouti.

Estimates of the current annual world production of frankincense vary, but generally are around several thousands tonnes. More than 82% of the product comes from Somalia, with some frankincense also gathered in adjacent Southern Arabia and Ethiopia, and other central African countries.

Frankincense is used in perfumery and aromatherapy. It is also an ingredient that is sometimes used in skincare. The essential oil is obtained by steam distillation of the dry resin. Some of the smells of the frankincense smoke are products of pyrolysis.

Frankincense is used in many Christian churches including the Eastern Orthodox, Oriental Orthodox and Catholic churches. According to the gospel of Matthew 2:11, gold, frankincense, and myrrh were among the gifts to Jesus by the biblical magi "from out of the East." Christian and Islamic Abrahamic faiths have all used frankincense mixed with oils to anoint newborn infants, initiates and members entering into new phases of their spiritual lives.

Conversely, the spread of Christianity depressed the market for frankincense during the 4th century AD. Desertification made the caravan routes across the Rub' al Khali or "Empty Quarter" of the Arabian Peninsula more difficult. Additionally, increased raiding by the nomadic Parthians in the Near East caused the frankincense trade to dry up after A.D. 300. 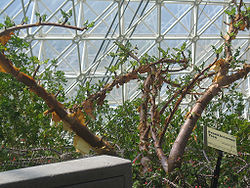 Boswellia sacra tree, from which frankincense is derived, growing inside Biosphere 2

Frankincense resin is edible and is used in traditional medicines in Africa and Asia for digestion and healthy skin. For internal consumption, it is recommended that frankincense be translucent, with no black or brown impurities. It is often light yellow with a (very) slight greenish tint. It is often chewed like gum, but it is stickier.

In Ayurvedic medicine frankincense (Boswellia serrata), commonly referred to in India as "dhoop," has been used for hundreds of years for treating arthritis, healing wounds, strengthening the female hormone system and purifying the air. The use of frankincense in Ayurveda is called "dhoopan". In Somali, Ethiopian, Arabian, and Indian cultures, it is suggested that burning frankincense daily in the house brings good health.[16]

Frankincense oil can also be used for relief from stings such as scorpion stings. 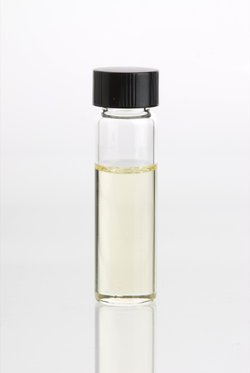 Olibanum is characterised by a balsamic-spicy, slightly lemon, fragrance of incense, with a conifer-like undertone. It is used in the perfume, cosmetic and pharmaceutical industries.

For therapy trials in ulcerative colitis, asthma and rheumatoid arthritis there are only isolated reports and pilot studies from which there is not yet sufficient evidence of safety and efficacy. Similarly, the long-term effects and side effects of taking frankincense has not yet been scientifically investigated. Nonetheless, several preliminary studies have been published. 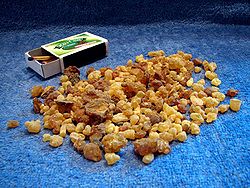 A 2008 study reported that frankincense smoke was a psychoactive drug that relieves depression and anxiety in mice.[21][22] The researchers found that the chemical compound incensole acetate[23] was responsible for the effects.[21]

In a different study, an enriched extract of "Indian Frankincense" (usually Boswellia serrata) was used in a randomized, double-blinded, placebo-controlled study of patients with osteoarthritis. Patients receiving the extract showed significant improvement in their arthritis in as little as seven days. The compound caused no major adverse effects and, according to the study authors, is safe for human consumption and long-term use.[24]

In a study published in 2009, it was reported that "Frankincense oil appears to distinguish cancerous from normal bladder cells and suppress cancer cell viability."[25]

A 2012 study in healthy volunteers determined that exposure to 11-keto-β-boswellic acid (KBA), a lead boswellic acid in the novel solubilized frankincense extract Boswelan, is increased when taken with food. However, simulations based on a two-compartment pharmacokinetic model with single first-order absorption phase proposed that the observed food interaction loses its relevance for the simulated repeated-dose scenario.[26]

In a 2012 study, researchers found that the "behavioral effect [of insensole actetate] was concomitant to reduced serum corticosterone levels, dose-dependent down-regulation of corticotropin releasing factor and up-regulation of brain derived neurotrophic factor transcripts IV and VI expression in the hippocampus. These data suggest that IA modulates the hypothalamic–pituitary–adrenal (HPA) axis and influences hippocampal gene expression, leading to beneficial behavioral effects supporting its potential as a novel treatment of depressive-like disorders."[27]

In 2013, Leicester University researchers announced findings that AKBA (acetyl-11-keto-beta-boswellic acid), a chemical compound in the resin, has cancer-killing properties and has the potential to destroy ovarian cancer cells. The lead researcher from the University's Department of Cancer Studies and Molecular Medicine announced the findings after a year studying the AKBA compound with ovarian cancer cell lines in vitro that showed it is effective at killing late stage cancer cells. Kamla Al-Salmani noted that among surprising findings were that some cells that had become resistant to chemotherapy were killed during the in vitro study. The efficacy of AKBA as a potential medicine for treatment of cancers (colon, breast and prostate) has been tested. The results are based on the preliminary and unverified findings of the laboratory study, which marked the first study to identify an ability to fight ovarian cancer. It is in early stages and, as of 2014, yet to be published in a peer-reviewed journal.[28][29][30]

Structure of β-boswellic acid, one of the main active components of frankincense

These are some of the chemical compounds present in frankincense:

See also for example the following references which give a comprehensive overview on the chemical compounds present in different frankincense species:.[13][14]