Golden cicadas or bees with garnet inserts, discovered in the tomb of Childeric I (died 482). They may have symbolised eternal life (cicadas) or longevity (the bees of Artemis).[1] 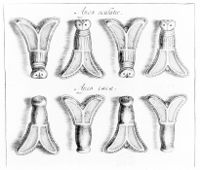 Frankish mythology comprises the mythology of the Germanic tribe of the Franks, from its roots in polytheistic Germanic paganism through the inclusion of Greco-Roman components in the Early Middle Ages. This mythology flourished among the Franks until the conversion of the Merovingian king Clovis I to Nicene Christianity (c. 500), though there were many Frankish Christians before that. After that, their paganism was gradually replaced by the process of Christianisation, but there were still pagans in the Frankish heartland of Toxandria in the late 7th century.

The migration era religion of the Franks likely shared many of its characteristics with the other varieties of Germanic paganism, such as placing altars in forest glens, on hilltops, or besides lakes and rivers, and consecrating woods.[2] Generally, Germanic gods were associated with local cult centres and their sacred character and power were associated with specific regions, outside of which they were neither worshipped nor feared.[3] Other deities were known and feared and shared by cultures and tribes, although in different names and variations. Of the latter, the Franks may have had one omnipotent god Allfadir ("All Father"), thought to have lived in a sacred grove. Germanic peoples may have gathered where they believed him to live, and sacrificed a human life to him.[4]

Variants of the phrase All Father (like Allfadir) usually refer to Wuotan (Wodin, Odhinn), and the Franks probably believed in Wuoton as "chief" of blessings, whom the first historian Tacitus called "Mercurius", and his consort Freia,[5] as well as Donar (Thor), god of thunder, and Zio (Tyr), whom Tacitus called "Mars". According to Herbert Schutz, most of their gods were "worldly", possessing form and having concrete relation to earthly objects, in contradistinction to the transcendent God of Christianity.[3] Tacitus also mentioned a goddess Nerthus being worshipped by the Germanic people, in whom Perry thinks the Franks may have shared a belief.[6] With the Germanic groups along the North Sea the Franks shared a special dedication to the worship of Yngvi, synonym to Freyr, whose cult can still be discerned in the time of Clovis.[7]

The religion of Clovis before his adherence to Catholic faith has been disputed,[8][9] though it is commonly held not to have been representative of the traditional beliefs of his countrymen. The majority of pagan Frankish beliefs derived from a traditional religion the main lines of which could be traced through all Germanic peoples; it is therefore possible to reconstruct the basic elements of Frankish traditional religion.[10] It has been argued that the Frankish pantheon expressed a variation of the Germanic structure that was especially devoted to fertility gods.[10]

Rich pagan Franks were buried with movable wealth in graves surrounded by horse burials. In contrast to many other Germanic tribes, no Merovingians claimed to be descended from Wodan.[11] Instead, the sacred tradition of a cart pulled by bulls seems to be present from the early Merovingians on.[12] The bulls that pulled the cart were taken as special animals, and according to Salian law the theft of those animals would impose a high sanction. In the grave of Childeric I (died 481) was found the head of a bull, craftily made out of gold. This may have represented the symbol of a very old fertility ritual,[13] that centred on the worship of the cow. This is supported by evidence of sacrifices in the fens of Drenthe associated with the Swifterbant culture.[14][15][16] Tacitus mentions rituals among the Germanic tribes of the North Sea area that include a fertility goddess Nerthus riding a chariot drawn by cows.[17] In a later incidence, Gregory of Tours places in the mouth of Clotilda, the wife of Clovis I, an interpretatio Romana of the Frankish fertility god with the Roman Saturn in a tirade against the pagan gods, naming this god first.[18]

Eduardo Fabbor has hypothesised that this Nerthus, whose worship was connected to a lake where the service was accompanied with human sacrifices, is the origin of the Merovingian conception of Merovech, after whom their dynasty would be named. The Merovingian kings riding through the country on an oxcart could then be an imaginative reenactment the blessing journey of their divine ancestor.[19]

The Frankish mythology that has survived in primary sources is comparable to that of the Aeneas and Romulus myths take in Roman mythology, but altered to suit Germanic tastes. Like many Germanic peoples, the Franks told a founding myth story to explain their connection with peoples of classical history. In the case of the Franks, these peoples were the Sicambri and the Trojans. An anonymous work of 727 called Liber Historiae Francorum states that following the fall of Troy, 12,000 Trojans led by chiefs Priam and Antenor moved to the Tanais (Don) river, settled in Pannonia near the Sea of Azov and founded a city called "Sicambria". In just two generations (Priam and his son Marcomer) from the fall of Troy (by modern scholars dated in the late Bronze Age) they arrive in the late 4th century AD at the Rhine. An earlier variation of this story can be read in Fredegar. In Fredegar's version an early king named Francio serves as namegiver for the Francs, just as Romulus has lent his name to Rome.

These stories have obvious difficulties if taken as fact. Historians, including eyewitnesses like Caesar, have given us accounts that places the Sicambri firmly at the delta of the Rhine and archaeologists have confirmed ongoing settlement of peoples. Furthermore the myth does not come from the Sicambri themselves, but from later Franks (of the Carolingian age or later), and includes an incorrect geography. For these reasons, and since the Sicambri were known to have been Germanic, current scholars think that this myth was not prevalent, certainly not historical: For example J. M. Wallace-Hadrill states that "this legend is quite without historical substance".[20] Ian Wood says that "these tales are obviously no more than legend" and "nonsensical", "in fact there is no reason to believe that the Franks were involved in any long-distance migration".[21]

In Roman and Merovingian times it was customary to declare panegyrics. These poetical declarations were held for amusement or propaganda, to entertain guests and please rulers. Panegyrics played an important role in the transmission of culture. A common panegyrical device was anachronism, the use of archaic names for contemporary things. Romans were often called "Trojans" and Salian Franks were called "Sicambri". A notable example related by the sixth-century historian Gregory of Tours states that the Merovingian Frankish leader Clovis I, on the occasion of his baptism into the Catholic faith, was referred to as a Sicamber by Remigius, the officiating bishop of Rheims.[22] At the crucial moment of Clovis' baptism, Remigius declared, "Bend down your head, Sicamber. Honour what you have burnt. Burn what you have honoured." It is likely that in this way a link between the Sicambri and the Salian Franks, who were Clovis' people, was being invoked. Further examples of Salians being called Sicambri can be found in the Panegyrici Latini, the Life of King Sigismund, the Life of King Dagobert, and other sources.

Pagan Frankish rulers probably maintained their elevated positions by their "charisma" or Heil, their legitimacy and "right to rule" may have been based on their supposed divine descent as well as their financial and military successes.[3][23] The concept of "charisma" has been controversial.[24]

Fredegar tells a story of the Frankish king Chlodio taking a summer bath with his wife when she was attacked by some sort of sea beast, which Fredegar described as bestea Neptuni Quinotauri similis, ("the beast of Neptune that looks like a Quinotaur"). Because of the attack, it was unknown if Merovech, the legendary founder of the Merovingian dynasty was conceived of Chlodio or the sea beast.[25]

In later centuries, divine kingship myths would flourish in the legends of Charlemagne (768–814) as a divinely-appointed Christian king. He was the central character in the Frankish mythology of the epics known as the Matter of France. The Charlemagne Cycle epics, particularly the first, known as Geste du Roi ("Songs of the King"), concern a King's role as champion of Christianity. From the Matter of France, sprang some mythological stories and characters adapted through Europe, such as the knights Lancelot and Gawain.