Booth was born and raised on a farm in Carmel, Indiana. As a boy, he was determined to become an artist. He studied pictures in books and magazines, including Scribner's and Harper's. His unusual technique was the result of a misunderstanding: Booth scrupulously copied magazine illustrations which he thought were pen-and-ink drawings. In fact, they were wood engravings. As a result, this led him to develop a style of drawing composed of thousands of lines, whose careful positioning next to one another produced variations in density and shade. The characteristics of his art were his scale extremes with large buildings and forests looming over tiny figures, decorative scrolls and borders, classic hand lettering and gnarled trees.[1]

Booth lived in the suburban city of New Rochelle, a well known artist colony and home to many of the top commercial illustrators of the day.[2]

Booth contributed to the Great War by illustrating recruitment posters, US savings bonds envelopes, booklets and death certificates for American soldiers who perished in France and Belgium, and work for the Red Cross.

Other contributions include illustrating the annual Telephone Almanac from 1936 to 1944, and several years for the Victrola Record catalogue.

In 1925, a limited edition (210 copies) and regular edition of his work was published "Sixty Reproductions from Original Drawings" by Robert Frank. In 1976 this version was published again- smaller in size and lesser quality paper by Nostalgia Press. All three versions are difficult to locate today.

Despite the laboriousness of his technique, Booth's compositions were characterised by a grand sense of space. As a result, his drawings were often well-matched to poetic or editorial entries.[3]

Books collecting his illustrations include Franklin Booth: American Illustrator (2006), edited by Manuel Auad by Auad Publishing, and Franklin Booth: Painter with a Pen (2002) by John Fleskes. 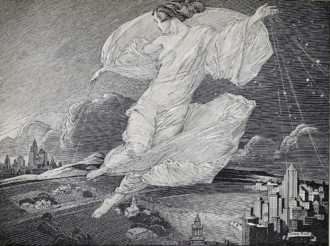 "A Continent Is Bridged" by Booth, originally an illustration for the 25th anniversary of transcontinental telephone service.

Roy Krenkel cited Booth as an influence and dedicated some of his paintings to him.