From Infogalactic: the planetary knowledge core
Jump to: navigation, search
Not to be confused with Franklin, North Carolina.

The county was formed in 1779 from the southern half of Bute County. It is named for Benjamin Franklin.[4] It is a part of the Research Triangle.

The "Franklin County Song" was selected in a 1929 contest by the county historical association as the song most suitable for public occasions. The words were written by Fred U. Wolfe, an agriculture teacher at Gold Sand. Sung to the tune "Maryland, My Maryland" ("O Christmas Tree"), the song was incorporated in the Bicentennial programs of 1979. At the evening convocation of January 29, Mrs. Beth Norris announced to the audience that Wolfe (retired and residing in North, South Carolina) was aware his song was part of the program that night. (See Franklin Times, January 30, 1979.)[5]

With loyalty we sing thy praise,
Glory to thy honored name!
Our voices loud in tribute raise,
Making truth thy pow'r proclaim.
Thy past is marked with vict'ry bold;
Thy deeds today can ne'er be told,
And heroes brave shall e'er uphold
Franklin's name forevermore.

We love thy rich and fruitful soil,
Wood, and stream, and thriving town.
We love the gift of daily toil,
Making men of true renown.
Thy church and school shall ever stand
To drive the darkness from our land—
A true and loyal, valiant band,
Sons of Franklin evermore.

A shrine of promise, pow'r and truth,
Lasting righteousness and peace,
A land of hope for toiling youth,
Yielding songs that never cease.
Let ev'ry son and daughter stay
The hand of vice that brings decay.
When duty's voice we shall obey,
Franklin's name shall live for aye.

There were 23,023 households out of which 30.2% had children under the age of 18 living with them, 52.3% were married couples living together, 13.4% had a female householder with no husband present, and 29.1% were non-families. 24.2% of all households were made up of individuals and 8.8% had someone living alone who was 65 years of age or older. The average household size was 2.56 and the average family size was 3.04.

Franklin County is governed by an appointed county manager and a seven-member Board of Commissioners who are elected in staggered four-year terms. Five are chosen by district and the other two at-large.[13] Additional county officials who are elected include Sheriff, Register of Deeds, Board of Education and Clerk of Superior Court.[14]

Franklin County, along with the town of Centerville, is patrolled by the Franklin County Sheriff's Office located in Louisburg. The current sheriff is Kent Winstead, who was elected in 2014.[15] Bunn, Franklinton, Louisburg and Youngsville have their own municipal police departments, regulated by the respective town governments. The community of Lake Royale near Bunn also has its own police department.[16] Franklin County also is covered by Troop C, District IV of the North Carolina Highway Patrol, located in Henderson, North Carolina.[17]

Franklin County is a member of the Kerr-Tar Regional Council of Governments.[18]

Franklin County Schools operates 16 schools throughout the county ranging from pre-kindergarten through twelfth grade. They include 4 high schools, 4 middle schools and 8 elementary schools.

Franklin County is home to the two-year Methodist-affiliated Louisburg College and to a satellite campus of Vance-Granville Community College. 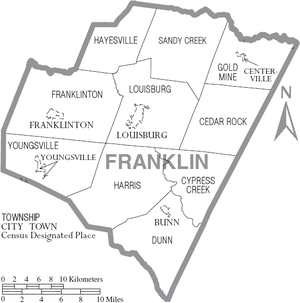