From Infogalactic: the planetary knowledge core
Jump to: navigation, search
This article is about the county. For the independent city in southeast Virginia, see Franklin, Virginia.

Franklin County is a county located in the Blue Ridge foothills of the U.S. state of Virginia. As of the 2010 census, the population was 56,159.[1] Its county seat is Rocky Mount.[2]

Franklin County is part of the Roanoke, VA Metropolitan Statistical Area and is located in the Roanoke Region of Virginia.[3] The Roanoke River forms its northeast boundary with Bedford County. 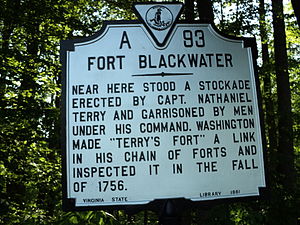 Historic marker for Fort Blackwater, one of the earliest frontier forts outside of the Tidewater area. Built in 1756 in present-day Franklin County 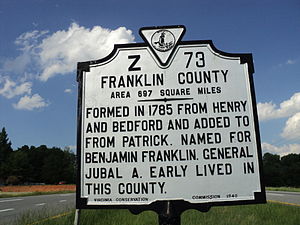 The Blue Ridge Foothills had long been inhabited by indigenous peoples. At the time of European encounter, mostly Siouan-speaking tribes lived in this area.

A few colonists moved into the area before the American Revolutionary War, but most settlement happened afterward, as people moved west seeking new lands. Cultivation of tobacco had exhausted soils in the eastern part of the state. The county was formed in 1785 from parts of Bedford and Henry counties. It was named for Benjamin Franklin.[4] The Piedmont and backcountry areas were largely settled by Scots-Irish, who were the last major immigrant group from the British Isles to enter the colonies before the Revolutionary War. There were also migrants from coastal areas, including free people of color, who moved to the frontier to escape racial strictures associated with the slave society of Virginia.[5]

In the 20th century during Prohibition, local wits named Franklin County the "Moonshine Capital of the World", as moonshine production and bootlegging drove the economy. As of 2000, the local chamber of commerce had adopted the title as a heritage identification for the area. Moonshine is still being made in the area.[6]

Historians estimate that in the 1920s, 99 of every 100 Franklin County residents were in some way involved in the illegal liquor trade.[7] The bootleggers became involved with gangsters from Chicago and other major cities, and some local law enforcement officials were part of the criminal activities and killing of competitors.[8] "Between 1930 and 1935 local still operators and their business partners sold a volume of whiskey that would have generated $5,500,000 in excise taxes at the old 1920 tax rate."[8]

A lengthy federal investigation resulted in indictments and trials for 34 suspects in 1935 for what was called the "Great Moonshine Conspiracy," which attracted national attention. The writer Sherwood Anderson was among the many outsiders who came to cover the trial. At what was then the longest trial in state history, 31 people were convicted, but their jail sentences were relatively light (two years or less). Thirteen conspirators were sentenced only to probation.[8]

This period has recently received new attention by writers. T. Keister Greer's history The Great Moonshine Conspiracy Trial of 1935 (2002) covered the trial and its background in the county.[9] The writer Matt Bondurant had ancestors in the area, whose exploits during this period inspired his historical novel, The Wettest County in the World (2008). (The title was based on a statement by Anderson.) The book was adapted as a film, Lawless, in 2012. In 2014 an historical novel with lots of history about the county and town came out: "Moonshine Corner, Keys to Rocky Mount," ISBN 9781500980115, by the widow of T. Keister Greer, Ibby Greer.

Since the 1980s, much residential development has occurred around Smith Mountain Lake. People live there who commute to work in the urbanized areas of Roanoke, Lynchburg, Martinsville, and Danville. Retirees have also moved in, and both groups have increased the county's population.

Clerk of the Circuit Court: Teresa J. Brown (I)

Commissioner of the Revenue: Margaret Stone Torrence (I)