Franklin Lakes was formed by an act of the New Jersey Legislature on March 11, 1922, from portions of Franklin Township, based on the results of a referendum held on April 11, 1922.[22][23][24] The borough was named for William Franklin, the illegitimate son of Benjamin Franklin, a steadfast Loyalist who served as the last colonial Governor of New Jersey.[25][26]

Franklin Lakes hosts the corporate headquarters of Becton Dickinson, the medical technology firm founded in 1897.[37] Medco Health Solutions, a leading pharmacy benefit manager, was based here until it was acquired by Express Scripts, another PBM, in 2012.[38]

Urban Farms Shopping Center is a major shopping center in the community. Franklin Lakes has The Market Basket, a supermarket/bakery/catering store.

Franklin Lakes is the setting of a Bravo network reality television series, The Real Housewives of New Jersey, and has also been the setting of MTV's My Super Sweet 16 and VH1's My Big Fat Fabulous Wedding.

Franklin Lakes was used for filming the fictional upstate New York town of Dargerville in the Law & Order episode "Knock-Off".[39]

Franklin Lakes is governed under the Borough form of New Jersey municipal government. The governing body consists of a Mayor and a Borough Council comprising six council members, with all positions elected at-large on a partisan basis as part of the November general election. A Mayor is elected directly by the voters to a four-year term of office. The Borough Council consists of six members elected to serve three-year terms on a staggered basis, with two seats coming up for election each year in a three-year cycle.[7] The Borough form of government used by Franklin Lakes, the most common system used in the state, is a "weak mayor / strong council" government in which council members act as the legislative body with the mayor presiding at meetings and voting only in the event of a tie. The mayor can veto ordinances subject to an override by a two-thirds majority vote of the council. The mayor makes committee and liaison assignments for council members, and most appointments are made by the mayor with the advice and consent of the council.[40][41] All council meetings are held at the Borough Hall located on DeKorte Drive, formerly Municipal Drive.

The Franklin Lakes Fire Department is an all-volunteer fire department, founded in 1924. The FLFD has two locations, one known as "Headquarters" which is located off of Franklin Avenue, and the other is the "Southside" Firehouse, located on Franklin Lakes Road. The current chief of the FLFD is Denny Knubel. The Assistant Chief is Ryan Dodd.[51]

Prior to the formation of the regional high school district, students from Franklin Lakes and Wyckoff had attended Ramsey High School as part of a sending/receiving relationship, until the Ramsey Public School District informed officials from the two communities that the Ramsey school would no longer have space to accommodate out-of-district students after the 1956-57 school year.[102]

Public school students from the borough, and all of Bergen County, are eligible to attend the secondary education programs offered by the Bergen County Technical Schools, which include the Bergen County Academies in Hackensack, and the Bergen Tech campus in Teterboro or Paramus. The district offers programs on a shared-time or full-time basis, with admission based on a selective application process and tuition covered by the student's home school district.[103][104]

Route 208 runs for 2.2 miles (3.5 km) across the borough's midsection, from Wyckoff to its western terminus at its intersection with Interstate 287 in Oakland.[106] Interstate 287 enters on the borough's western border with Oakland and heads north towards Mahwah,with the highway's exit 59 in the borough.[107] County Route 502 (Breakneck Road / Franklin Lakes Road) enters from Wayne Township in Passaic County at the borough's southwest corner, runs along the border with Oakland and re-enters Franklin Lakes, heading north towards Wyckoff.[108] 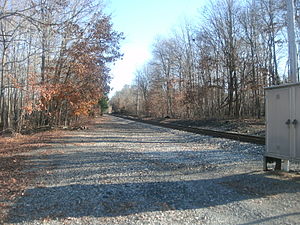 The former Campgaw Station site for the New York, Susquehanna and Western Railway as seen in November 2011. There is nothing left of the station platform or depot.

From the late 1800s until 1966, Franklin Lakes had passenger train service at the Crystal Lakes and Campgaw stations on the New York, Susquehanna and Western Railway.[110]

People who were born in, residents of, or otherwise closely associated with Franklin Lakes include:

Franklin Lakes is home to the following locations on the National Register of Historic Places: