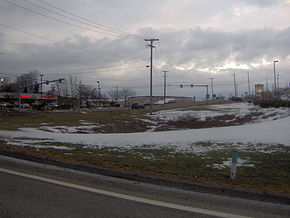 Franklin Park is a borough in Allegheny County, Pennsylvania, United States. The population was 13,470 at the 2010 census.[1]

Located in the northwestern corner of Allegheny County, the community that is today Franklin Park Borough was originally part of Western Pennsylvania’s Depreciation Lands. With the formation of Allegheny County in 1788, Franklin Park was part of Pitt Township, which included all land north of the Ohio River. Following the path of Pine Creek as a boundary, Pitt Township was divided in half (1800), with the newly created Pine Township containing what would become Franklin Park. Three years later, Ohio Township was created from Pine, extending nine miles along the Ohio River and northward to Butler County. It included the area that would later become Franklin Park. Early in 1823, Ohio Township residents in the northwestern most corner of Allegheny County petitioned the county courts for permission to secede from the township and create their own municipality. Despite a counter-petition being filed, the county courts approved the motion and in August 1823, Franklin Township was created, which included what are today Franklin Park and Bradford Woods boroughs and Marshall Township. Forty years later, Marshall Township was created from Franklin with Bradford Woods seceding from Marshall in 1915. Franklin would remain a second class township until August 1961 when it became the Borough of Franklin Park.

Throughout most of its history, Franklin moved forward at its own unhurried pace. There were no towns or business districts. Churches, one-room schools, blacksmith shops and country stores were scattered across gently rolling farmlands. Throughout the late 1800 and early 1900s, the area had a thriving oil and gas industry.

By the end of the Great Depression, farming declined as a livelihood because men were taking better paying jobs in the mills of Pittsburgh, Ambridge and Coraopolis. The first subdivisions appeared in Franklin Township following World War II. Population growth brought demands for public services and schools. It was during this time, that the community enacted its first ordinances and building codes, along with providing public water and sewers. Faced with increasing numbers of students, the Franklin Township School District along with its counterparts in Marshall, Bradford Woods, McCandless and Pine joined in 1948 to create the North Allegheny School District. Despite Pine Township leaving the jointure a year later, the other communities opened a newly built high school in 1954. Today, the North Allegheny School District is home to two high schools, three middle and seven elementary schools.

The opening of Interstates 79 and 279 through the heart of Franklin Park brought more change and challenges to this once rural community. Today, Franklin Park is a still growing suburban Pittsburgh community of just over 13,000 residents that is served by the Wexford 15090, Pittsburgh 15237 and Sewickley 15143 post offices.

According to the United States Census Bureau, the borough has a total area of 13.6 square miles (35 km2), all of it land.

It is part of the North Allegheny School District, along with the Town of McCandless, Marshall Township and the borough of Bradford Woods, and participates in the multi-municipality Northland Public Library.

There were 3,866 households, out of which 45.2% had children under the age of 18 living with them, 78.0% were married couples living together, 4.9% had a female householder with no husband present, and 15.1% were non-families. 13.2% of all households were made up of individuals, and 5.3% had someone living alone who was 65 years of age or older. The average household size was 2.93 and the average family size was 3.23.

Franklin Park is governed by an elected six-member council, mayor, and a hired manager. Each of the borough's three wards elects two members to the council. The council elects a President, Vice-President, and Second Vice-President.

Each year, Council appoints a local high school student to serve as the Junior Councilperson.