The beginning of Frankokratia: the division of the Byzantine Empire after the Fourth Crusade. 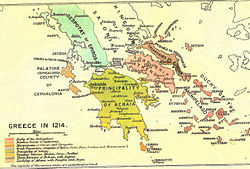 The Greek and Latin states in southern Greece, ca. 1214. 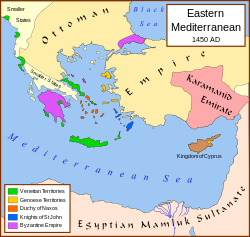 The Eastern Mediterranean in ca. 1450 AD. The Ottoman Empire and the surviving Latin possessions in Greece are depicted.

The Frankokratia (Greek: Φραγκοκρατία, Frankokratía, lit. Anglicized as "Francocracy", "rule of the Franks"), also known as Latinokratia (Greek: Λατινοκρατία, Latinokratía, "rule of the Latins") and, for the Venetian domains, Venetocracy (Greek: Βενετοκρατία, Venetokratía or Ενετοκρατία, Enetokratia), refers to the period in Greek history after the Fourth Crusade (1204), when a number of primarily French and Italian Crusader states were established on the territory of the dissolved Byzantine Empire (see Partitio terrarum imperii Romaniae).

The term derives from the fact that the Orthodox Greeks called the Western European Catholics "Latins" or "Franks". The span of the Frankokratia period is different for every region: the political situation was highly volatile, as the Frankish states were fragmented and changed hands, and in many cases were re-conquered by the Greek successor states.

With the exception of the Ionian Islands and some isolated forts which remained in Venetian hands until the turn of the 19th century, the final end of the Frankokratia in the Greek lands came with the Ottoman conquest, chiefly in the 14th–16th centuries, which ushered in the period known as "Tourkokratia" ("rule of the Turks"; see Ottoman Greece).