pronunciation (help·info)) (16 September 1888 – 3 June 1964) was one of the most famous Finnish writers and in 1939 became the first Finnish writer to be awarded the Nobel Prize for literature.

Frans Eemil Sillanpää was born into a peasant farming family in Hämeenkyrö. Although his parents were poor, they managed to send him to school in Tampere. In 1908 he moved to Helsinki to study medicine. Here his acquaintances included the painters Eero Järnefelt and Pekka Halonen, composer Jean Sibelius and author Juhani Aho.

Five years later, in 1913 Sillanpää moved from Helsinki to his old home village, married, and devoted himself to writing.[1]

He won international fame for his novel Nuorena nukkunut (The Maid Silja/Fallen Asleep While Young) in 1931.

In 1939, he was awarded the Nobel Prize in Literature "for his deep understanding of his country's peasantry and the exquisite art with which he has portrayed their way of life and their relationship with Nature."

The asteroid 1446 Sillanpää, discovered on January 26, 1938 by the renowned Finnish astronomer and physicist Yrjö Väisälä, was named after him. 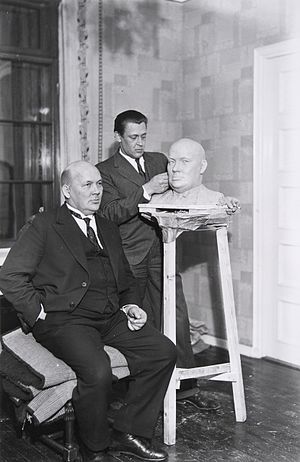