Born in Magdeburg in the Prussian province of Saxony, Seldte was the son of an owner of a factory producing chemical products and soda water.[2] He attended the Wilhelm-Raabe-Gymnasium in Magdeburg and, after an apprenticeship as a salesman, he studied chemistry at the universities of Braunschweig and Greifswald. In 1908 he took over the business of his early deceased father.[3]

As an officer of the German Army he was wounded in World War I and lost his left arm.[4] He then became a front reporter. Awarded with the Iron Cross 2nd and 1st class,[5] he also was promoted to the rank of a Hauptmann (captain) in the 7th Reserve Division.[citation needed]

As a reaction to the German Revolution of 1918–1919, Seldte founded the Stahlhelm organization of World War I veterans on 25 December 1918, agitating against the Treaty of Versailles and German war reparations. According to Seldte, the organization was to use the spirit of the Frontsoldaten against the ‘swinish revolution’ taking place in Germany under the Weimar government.[6] While he took charge of the Stahlhelm from 1923 onwards, he had to cope with the constant rivalry of his deputy leader, the militant Theodor Duesterberg. 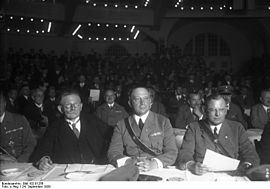 Seldte (r.) with Hugenberg and the Berlin Stahlhelm leader von Stephani at a rally against the Young-Plan, Berlin Sportpalast, 1929

During the later years of the Weimar Republic the Stahlhelm became increasingly anti-democratic and anti-republican. However, Seldte hoped that the organization could become a leading organ of a united right-wing movement. In 1929 it united its forces with the DNVP under Alfred Hugenberg, the Pan-German League and the Nazi Party to initiate a German referendum against the Young Plan on World War I reparations.[7] The common goal was to denounce the Chancellor Hermann Müller and his ministers as traitors to their country, nevertheless the plebiscite failed to reach the quorum. In 1931 Seldte helped create the short-lived Harzburg Front,[8] a right-wing alliance against the government of Müller's successor Heinrich Brüning.

During the negotiations for the Chancellorship of Germany between Franz von Papen and Hitler in mid-January 1933, Seldte threw his vote and the Stahlhelm behind Hitler, after which, Papen acquiesced to Hitler’s demands.[9] On the day of the Machtergreifung on 30 January 1933, Seldte joined the Hitler Cabinet as Reich Minister for Labour,[10] once again outdoing his long-time rival Duesterberg. In the run-up to the elections of March 1933 the Stahlhelm together with Hugenberg's national conservative German National People's Party (DNVP) attempted to make the Kampffront Schwarz-Weiß-Rot ("Black White Red Combat Front") into the dominant political camp on the right, but ultimately failed as it only gained 8.0% of the votes cast.[citation needed] Nevertheless, Seldte obtained a seat in the Reichstag parliament as a DNVP "guest".[citation needed]

On 27 April 1933 Seldte finally joined the Nazi Party and merged the Stahlhelm into Ernst Röhm's Sturmabteilung (SA) militia – de facto placing it at the disposal of Hitler.[11] In August 1933, he was awarded the rank of SA-Obergruppenführer and later was appointed Reichskommissar for the Freiwilliger Arbeitsdienst employment program, but was soon superseded by his state secretary Konstantin Hierl as leader of the Reichsarbeitsdienst organization.[citation needed] In March 1934 Seldte was made the leader of the German League of Front Fighters, a successor organization of the Stahlhem, which however was soon disbanded.[citation needed] In 1935 he requested to be released from official responsibilities, but Hitler refused.

Throughout his tenure as chief of the Labor Ministry, Seldte never enjoyed the full support of Hitler, who did not think he was worth much. As a result, members of the Nazi hierarchy began encroaching on his areas of responsibility and Seldte was marginalized accordingly.[12] For instance, Hermann Goering’s Four Year Plan which he began to implement in late 1936, ran roughshod over Seldte's Labor Ministry altogether.[13] Seldte, without substantial power, remained Reich Minister for Labour until the end of World War II and was also a member of the Prussian government under Minister president Hermann Göring as State Labour Minister. Even after Hitler’s suicide and the nomination of Grand-Admiral Dönitz as his successor, Seldte kept his post, being accordingly named Labour Minister.[14]

Seldte was captured and arrested in Mondorf-les-Bains at the end of the war.[citation needed] During the Nuremberg trials, Seldt tried to exonerate himself by claiming that he had stood against the dictatorship of Hitler and that he advocated for a two-chamber system of parliamentary governance.[15] His story was not convincing. Seldte died in a US military hospital in April 1947 at Fürth, before the Nuremberg Tribunal had the chance to formally arraign him on charges.[16]

During the time of Nazi Germany, streets were named after him in several German cities, among them his hometown Magdeburg and Leverkusen.[17]