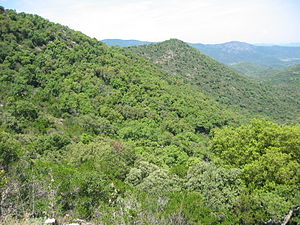 The "plateau of Moors" near Fraxinet

Fraxinet or Fraxinetum (Arabic: فرخشنيط Farakhshanīt‎‎ or فرخسة Farakhsha, from Latin fraxinus: "ash tree", fraxinetum: "ash forest") was the site of a 10th-century fortress established by Muslims at modern La Garde-Freinet, near Saint-Tropez, in Provence. The modern Massif des Maures ("plateau of Moors") takes its name from the Muslims of Fraxinet. 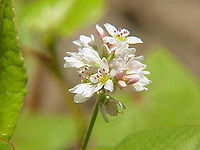 According to Liudprand of Cremona, in about 889 a ship carrying twenty adventurers from Pechina near Almería in what was then called Al-Andalus anchored in the Gulf of Saint-Tropez in Provence. They were called muwallad, that is, converts to Islam who spoke both Latin and Arabic.[1] They built a tiny stone fortification and protected their outposts by cultivating thorny bushes.

The region around Fraxinet was known in contemporary sources as Djabal al-Qilâl (Arabic: جبل القِلال‎‎, "mountain of the many peaks") and is, strangely enough, depicted on Arab maps of the period as an island. The area controlled by Fraxinet included St-Tropez, its gulf and hinterland, as well as Ramatuelle and its peninsula.[2] Ibn Hawqal recorded that the area was richly cultivated by its Muslim inhabitants, and they have been credited with a number of agricultural and fishing innovations for the region. Ship wrecks in the area indicate that Fraxinet may have been a center of trade as much as of piracy.[3]

A leader of Fraxinet itself, Nasr ibn Ahmad, is mentioned in the Muqtabis of Ibn Hayyan of Córdoba, the greatest historian of medieval Spain. According to that 11th-century chronicle, Abd ar-Rahman III made peace in 939-940 with a number of Frankish rulers and sent copies of the peace treaty to Nasr ibn Ahmad, described as the commander of Farakh shanit, as well as to the Arab governors of the Balearic Islands and the seaports of al-Andalus—all of them subject to the Umayyad caliphate. Nothing else is revealed about the Fraxinet commander.[4]

Christian sources, especially Liudprand[5] and the Vita sancti Bobonis, depict the Moors of Fraxinet as brigands. From their base, they ravaging the surrounding area, reaching as far as Piedmont in Northern Italy and effectively raided and plundered the Alpine passes between France and Italy.

In 931 King Hugh of Italy, along with some Byzantine ships, attacked Fraxinetum. The Byzantines were able to overcome the Muslim ships with Greek fire, while Hugh's troops entered the town. However, in 941 Hugh allowed the Muslims of Fraxinetum to harass the Alpine passes for his own political ends in his struggle with Berengar of Ivrea.[6]

It was assumed by Emperor Otto I that the Umayyad Caliph of Córdoba, Abd-ar-Rahman III, was sovereign over Fraxinetum, and he sent John of Gorze as ambassador in 953 to demand the cessation of the pirates' activities. A return embassy from the Caliph was made by the Mozarab bishop Recemund. It is unlikely, however, that the pirates regarded Fraxinetum as part of the Caliph’s territory.[7]

The Muslims were defeated at the Battle of Tourtour by William I of Provence. They were expelled from Fraxinetum in 973 by an alliance of Rotbold I of Provence and Arduin Glaber.

With the capture of Fraxinet the Alpine passes were reopened to Christian travellers. Renewed contact between France, Italy and Germany helped the dispersal of architectural and artistic styles, especially from the craftsmen of Lake Como, which led to rise of the Romanesque style across Western Europe.[8]

The Andalusis introduced fine pine tar called goudron, a word derived from the Arabic qitran, with the same meaning. The Andalusis also taught the villagers medical skills and introduced both ceramic tiles and the tambourine to the area. Some French scholars believe the Andalusis of Fraxinet introduced the cultivation of buckwheat, a grain that has two names in modern French, blé noir (black wheat) and blé sarrasin (Saracen wheat).