Fred Lawrence Whipple (November 5, 1906 – August 30, 2004) was an American astronomer, who worked at the Harvard College Observatory for over 70 years. Amongst his achievements, he discovered some asteroids and comets, came up with the "dirty snowball" cometary hypothesis, and designed the Whipple shield. 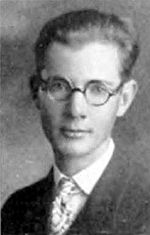 Whipple was born on November 5, 1906, in Red Oak, Iowa, as the son of a farmer. An early bout with polio ended his ambition of being a professional tennis player. Whipple studied at Occidental College in Southern California, then majored in mathematics at the University of California at Los Angeles, graduating in 1927. Recollecting his path from mathematics to astronomy, Whipple stated in a 1978 autobiography that his "mathematics major veered [him] through physics and finally focused on astronomy where time, space, mathematics, and physics had a common meeting ground."[1]

After taking a class in astronomy, he enlisted at the University of California, Berkeley where he obtained his PhD in Astronomy in 1931. While in graduate school, he helped map the orbit of the then newly discovered dwarf planet Pluto. He joined Harvard College Observatory in 1931 and studied the trajectories of meteors, confirming that they originated within the solar system rather than from interstellar space. In 1933, he discovered the periodic comet 36P/Whipple and the asteroid 1252 Celestia. He also discovered or co-discovered five other non-periodic comets, the first of which was C/1932 P1 Peltier-Whipple, independently discovered by the famed amateur astronomer Leslie Peltier.

During World War II, he invented a device for cutting tinfoil into chaff to confuse enemy radar tracking Allied aircraft. He was awarded a Certificate of Merit for this in 1948. He also invented a "meteoroid bumper" or "Whipple shield", which protects spacecraft from impact by small particles by vaporizing them.

From 1950 until 1977 he was a professor of Astronomy at Harvard University, including being the Phillips Professor of Astronomy between 1968 and 1977. During these years (in the early 1950s), he wrote a series of influential papers entitled A Comet Model, published in Astrophysical Journal.[2][3][4] In these papers, he proposed the "icy conglomerate" hypothesis of comet composition (later called the "dirty snowball" hypothesis). The basic features of this hypothesis were later confirmed; however, the exact amount (and thus the importance) of ices in a comet is an active field of research, with most of the recently obtained data[5] pointing to a low contribution of ices to a comet's mass (dubbed the "icy dirtball" hypothesis). He also anticipated the era of artificial satellites and organized the members of Operation Moonwatch to track them. These groups were the only ones prepared and ready to make observations when the Soviet Union unexpectedly launched Sputnik I in 1957. He became director of the Smithsonian Astrophysical Observatory when Loyal Blaine Aldrich retired in 1955,[6] and remained in this post until 1973.

Whipple made at least one media appearance, in the science documentary film Target...Earth? (1980).