From Infogalactic: the planetary knowledge core
Jump to: navigation, search
This article is about the real estate developer. For his father, see Frederick Trump.

Trump and his mother, Elizabeth Christ Trump, lost Trump's father, Frederick, when Trump was 13 years old. By 15, in partnership with his mother and non-family investors, Trump had begun a career in home construction and sales. The development company was incorporated as E. Trump & Son in 1927, and grew to build and manage single-family houses in Queens, barracks and garden apartments for U.S. Navy personnel near major shipyards along the East Coast, and more than 27,000 apartments in New York City.

Trump was investigated by a U.S. Senate committee for wartime profiteering (1954), and by the U.S. Justice Department's Civil Rights Division for civil rights violations (1973). According to The New York Times and The Washington Post, the later incident inspired a song by tenant and folk singer, Woody Guthrie.[1][2] 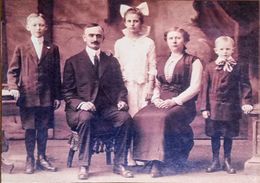 Frederick Christ Trump was born in the Bronx on October 11, 1905.[3] Trump was one of three children of German immigrants Elizabeth (née Christ) and Frederick Trump. He had a younger brother John and an older sister Elizabeth Trump Walters (1904–1961). His father Frederick Trump, originally named Friedrich Trump, had immigrated to New York City in 1885 from the German village of Kallstadt, Palatinate (by then part of the Kingdom of Bavaria) and made a fortune in the Klondike Gold Rush. He then returned to Kallstadt and married Elisabeth Christ, an 11 years younger former neighbor's daughter, in 1902.[3]:pp. 94

Friedrich Trump's name was incorrectly recorded as Trumpf on the passenger list of his ship when he immigrated to the USA.[4] Britt Peterson of The Boston Globe reports, based on the Blair biography, that the family had changed the spelling from the ancestral Drumpf, sometime during the Thirty Years' War (1618–1648).[5]

Trump became a carpenter and took classes in reading blueprints.[8] In 1920, at age 15, Fred Trump went into business with his mother in construction and real estate development, forming Elizabeth Trump & Son. His mother Elizabeth Christ Trump was an active partner, signing the checks since he was under 21 and not yet an adult.[6] With an $800 loan from his mother, Trump built his first house in Woodhaven in 1923 and sold it for $7,000.[8] His mother incorporated Elizabeth Trump & Son in 1927, when Fred was 22. The firm had three outside investors and initial capital of $50,000.[9]

In the late 1920s, Trump began building single-family houses in Queens, which were sold for $3,990 each. By the mid-1930s in the middle of the Great Depression, he helped pioneer the concept of supermarkets with the Trump Market in Woodhaven, which advertised "Serve Yourself and Save!", becoming an instant hit. After only a year Trump sold it to the King Kullen supermarket chain.[8]

During World War II, Trump built barracks and garden apartments for U.S. Navy personnel near major shipyards along the East Coast, including Chester, Pennsylvania, Newport News, Virginia, and Norfolk, Virginia. After the war he expanded into middle-income housing for the families of returning veterans, building Shore Haven in Bensonhurst in 1949, and Beach Haven near Coney Island in 1950 (a total of 2,700 apartments). In 1963–1964, he built Trump Village, an apartment complex in Coney Island, for US$70 million.[8]

Although both of Trump's parents were born in Germany and he himself had been conceived there,[10] for decades after World War II Trump told friends and family that his family was of Swedish origin. According to his nephew John Walter, "He had a lot of Jewish tenants and it wasn't a good thing to be German in those days."[6]

Fred's son, Donald Trump, joined Trump Management Company in 1968, and rose to become company president in 1971. He renamed it The Trump Organization in 1980. Donald Trump was reported to have received a loan from his father in the mid-1970s of $1 million (variously reported as numerous loans exceeding $14 million).[11] The younger Trump described this as a "very small loan," which allowed him to enter the real estate business in Manhattan, while his father stuck to Brooklyn and Queens.[12] "It was good for me," Donald later commented. "You know, being the son of somebody, it could have been competition to me. This way, I got Manhattan all to myself."[6]

During the 1980s, Fred Trump became friends with future-Prime Minister of Israel, Benjamin Netanyahu, who was the Israeli Ambassador to the United Nations in Manhattan.[13]

On Memorial Day in 1927, the Ku Klux Klan marched in Queens to protest that "Native-born Protestant Americans" were being "assaulted by Roman Catholic police of New York City."[14] Fred Trump was one of seven men who were arrested that day "on a charge of refusing to disperse from a parade when ordered to do so."[14] In 2016, Vice magazine reported on their investigation of earlier newspaper clippings and found that Trump was the only person arrested who was not charged with any crime, leading them to conclude that he could have been a bystander; they also speculated that Trump may have been a member of the KKK, which had gone through a revival in urban areas after 1915.[15] When asked about the issue in September 2015 by The New York Times, Donald Trump, then a candidate for presidency of the United States, denied that his father had been arrested, or that he had been in the KKK.[16]

In 1954, Trump was investigated by a U.S. Senate committee for profiteering from public contracts, including overstating his Beach Haven building charges by US$3.7 million.[2] In testimony before the Senate Banking Committee in 1954, William F. McKenna, appointed to investigate "scandals" within the FHA, cited Fred C. Trump and his partner William Tomasello as examples of how profits were made by builders using the FHA.[citation needed] McKenna said the two paid $34,200 for a piece of land which they rented to their corporation for over $60,000 per year in a 99-year lease, so that if the apartment they built on it ever defaulted, the FHA would owe $1.5 million on it. McKenna said that Trump and Tomasello obtained loans for $3.5 million more than the apartments cost.[citation needed] Trump testified before the Senate Banking Committee the following month as it investigated "windfall profits." He said that builders would not have built apartments under an expired post-war loan insurance program if regulations had set inflexible limits on loans issued by the FHA.[17][non-primary source needed][18][non-primary source needed] Folk icon Woody Guthrie, who from 1950 was a tenant in one of Trump's apartment complexes in Brooklyn, criticized Trump as a landlord. He wrote lyrics that accused his landlord of stirring up racial hate "in the bloodpot of human hearts".[1]

In 1973, the Civil Rights Division of the U.S. Department of Justice (DOJ) filed a civil rights suit against the Trump Organization (TO; Fred Trump, chair, 27-year-old Donald Trump, president) charging it with "violating the Fair Housing Act of 1968."[19] In response, Trump attorney Roy Cohn filed a counter-suit against the government for $100 million, "portray[ing] the Trumps as the victims," claiming the DOJ's "falsely accusing them of discrimination."[19]

The suits arose after complaints to the New York City Commission on Human Rights and to the Urban League led the League and other groups to send black and white "testers" to apply for apartments in Trump-owned complexes, which led them to conclude that whites got apartments in the buildings of their interest, while blacks generally did not; both advocacy organizations then raised the issue with the Justice Department.[19] As reported by Wayne Barrett and Jon Campbell for The Village Voice, citing court records, "four superintendents or rental agents confirmed that applications sent to the [TO] central office for acceptance or rejection were coded by race."[20] An early Village Voice article by Wayne Barrett in 1979 cited court records from the case and reported that a TO rental agent indicated he had been give instructions by Fred Trump "not to rent to blacks" and to "decrease the number of black tenants" by encouraging their relocation to other housing.[21][20] After approximately two years in court, a consent decree between the DOJ and the TO was signed (June 10, 1975), with both sides claiming victory[19]—the TO for its perceived ability to continue to deny rentals to welfare recipients,[21][19] and the head of DOJ’s housing division for the decree being "one of the most far-reaching ever negotiated,"[19][21] as it personally and corporately prohibited the Trumps and the TO from “discriminating against any person in the terms, conditions, or priveleges [sic.] of sale or rental of a dwelling,”[19] and "required Trump to advertise vacancies in minority papers and list vacancies... [preferentially, with a Center of] the Urban League," as well as to use the ads to inform potential minority applicants that they had equal opportunity to seek housing at TO properties.[19] Finally, it required the TO to "promote minorities to professional jobs,"[21] and it ordered the Trumps "to 'thoroughly acquaint themselves personally on a detailed basis' with the Fair Housing Act."[19] The Justice Department would subsequently further complain that continuing "racially discriminatory conduct by Trump agents has occurred with such frequency that it has created a substantial impediment to the full enjoyment of equal opportunity."[when?][20]

Fred Trump and his wife Mary supported medical charities through the gifts of buildings. Mary Trump received medical care at the Jamaica Hospital Medical Center. Afterward, Fred and Mary contributed a building, the Trump Pavilion, to the medical center.[6][22][23] Community Mainstreaming Associates of Great Neck, which "provides homes for functionally retarded adults," received, in a combined gift to the National Kidney Foundation (New York/New Jersey chapter), a two building complex in Brooklyn;[6][22] the Cerebral Palsy Foundation (New York/New Jersey chapter) also received a building.[6] In addition, Trump made charitable contributions to the Long Island Jewish Hospital, and to the Hospital for Special Surgery in Manhattan,[6] and Mrs. Trump served on the Women's Auxiliary of the Jamaica Day Nursery.[22]

Fred Trump supported Jewish and Israeli causes and institutions, including his donation of the land for building the Beach Haven Jewish Center in Flatbush, New York,[24] and significant support for Israel Bonds, debt securities that trade at a risk-adjusted spread to U.S. Treasury bonds and are issued by the government of Israel.[25]

The Trumps were active in the Salvation Army, the Boy Scouts of America and the Lighthouse for the Blind among other charities.[22] Fred Trump also provided support to the school his children attended, The Kew-Forest School,[6] where he served on the board of directors.[26]

Trump married Mary Anne MacLeod (born May 10, 1912 in Stornoway, Scotland) in 1936 and they settled in Jamaica, Queens.[27] Her birthplace is on the Scottish island of Lewis and Harris.[28] On May 2, 1930, she emigrated to the United States, leaving Glasgow on the RMS Transylvania. She stated her occupation as "domestic," meaning either a servant or maid in domestic service.[27] She returned to Scotland on the SS Cameronia, arriving on September 12, 1934.[citation needed] She traveled on a "re-entry permit" obtained from Washington on March 3, 1934—a permit only granted to immigrants intending to stay and gain U.S. citizenship—where she was again listed as a "domestic", going to live with her sister Catherine Reid.[29][30]

Fred Trump suffered from Alzheimer's disease for six years.[6] He fell ill with pneumonia in June 1999 and was admitted to Long Island Jewish Medical Center in New Hyde Park, where he died at age 93 a few weeks later.[36] Trump's estate was estimated by his family at $250 million to $300 million;[6] his funeral was held at the Marble Collegiate Church.[36] He is interred at Lutheran All Faiths Cemetery in Middle Village, Queens.[37] His widow, Mary, died the following summer, on August 7, 2000, in New Hyde Park, New York, at age 88.[22]