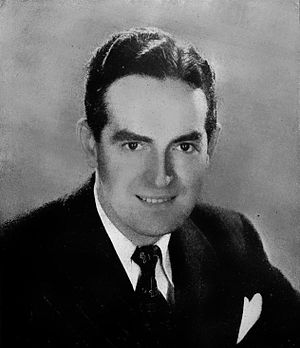 Fred Waring in a 1944 advertisement

Fredrick Malcolm Waring (June 9, 1900 – July 29, 1984) was a popular musician, bandleader and radio-television personality, sometimes referred to as "America's Singing Master" and "The Man Who Taught America How to Sing."[1][2] He was also a promoter, financial backer and eponym of the Waring Blendor, the first modern electric blender on the market.[3]

Fredrick Malcolm Waring was born in Tyrone, Pennsylvania on June 9, 1900 to Jesse Calderwood and Frank Waring.[1]

During his teenage years, Fred Waring, his brother Tom, and their friend Poley McClintock founded the Waring-McClintock Snap Orchestra, which evolved into Fred Waring's Banjo Orchestra.[2] The band often played at fraternity parties, proms, and dances, and achieved local success.

Waring attended Penn State University, where he studied architectural engineering. He also aspired to be in the Penn State Glee Club, but he was rejected with every audition due to "college politics" and tension between him and the glee club's director, Dr. Clarence Robinson.[4] His Banjo Orchestra eventually became so successful that he decided to abandon his education in order to tour with the band, which eventually became known as Fred Waring and his Pennsylvanians.[2]

He married his college sweetheart, Dorothy McAteer, in 1923, but divorced her in 1929. He remarried in 1933 to Evalyn Nair and had three children, but in 1954 they divorced.[4] Their children were: Dixie, Fred Waring Jr., William "Bill", Paul and Malcolm. Son Fred Jr. was a conductor and jazz trombonist. Grandson Jordan Waring is an orchestral composer.[5]

Fred Waring died of stroke at his summer home on July 29, 1984 at State College, Pennsylvania.[1]

From 1923 until late 1932, "Waring's Pennsylvanians" were among Victor Records best-selling bands.[6] In late 1932, he abruptly quit recording, although his band continued to perform on radio. In 1933, "You Gotta Be a Football Hero" was performed on radio to great acclaim. (His 1930 recording of Cole Porter's Love For Sale is one of the only period versions of this popular, yet controversial hit that has a vocal chorus.)

Adding a men's singing group to his ensemble, he recruited Robert Shaw, recently out of the Pomona College glee club, to train his singers. Shaw later founded the Robert Shaw Chorale, directed the Atlanta Symphony Orchestra and Chorus and became America's preeminent conductor of serious choral music. The Waring glee club sound can be detected in some Robert Shaw Chorale recordings. Pembroke Davenport (1911–85) was Waring's pianist and arranger.

During World War II, Waring and his ensemble appeared at war bond rallies and entertained the troops at training camps.[2] He composed and/or performed dozens of patriotic songs, his most famous being "My America." In 1943, Waring acquired the Buckwood Inn in Shawnee on Delaware, Pennsylvania, and renamed the resort the Shawnee Inn. To promote the Inn, Waring centered his musical activities at the Inn itself. He created, rehearsed and broadcast his radio programs from the stage of Shawnee's Worthington Hall throughout the 1950s.

During the 1940s and early 1950s, Waring and His Pennsylvanians produced a string of hits, selling millions of records. A few of his many choral hits include "Sleep," "Battle Hymn of the Republic," "Smoke Gets in Your Eyes," "Button Up Your Overcoat," "White Christmas," "Give Me Your Tired, Your Poor" and "Dancing in the Dark."[7]

In 1947, Waring organised the Fred Waring Choral Workshop at his Pennsylvania headquarters in the old Castle Inn in Delaware Water Gap, Pennsylvania,[8] which was also the home of Shawnee Press, the music publisher which he founded. At these sessions, talented musicians learned to sing with precision, sensitivity and enthusiasm. When these vocalists returned home and shared what they had learned with fellow musicians, Waring's approach to choral singing spread throughout the nation. The first Fred Waring Music Workshop in the western United States was held in June 1968 as part of the University of Nevada's Summer Session curriculum in Reno, Nevada.[9] Waring taught and supervised these summer workshop for 37 years, continuing right until the day he died.[2]

Waring expanded into television with The Fred Waring Show, which ran on CBS Television from June 20, 1948 to May 30, 1954 and received several awards for Best Musical Program. (The show was 60 minutes long until January 1952, and 30 minutes thereafter.) In the 1960s and 1970s, popular musical tastes turned from choral music, but Waring changed with the times, introducing his Young Pennsylvanians, a group of fresh-faced, long-haired, bell-bottomed performers who sang old favorites and choral arrangements of contemporary songs.[10] In this way he continued as a popular touring attraction, logging some 40,000 miles a year.[2]

Some $25,000 later, the Waring-owned Miracle Mixer was introduced to the public at the National Restaurant Show in Chicago retailing for $29.75. In 1938, Fred Waring renamed his Miracle Mixer Corporation as the Waring Corporation, and the mixer's name was changed to the Waring Blendor (the "o" in blendor giving it a slight distinction from "blender").

The Waring Blendor became an important tool in hospitals for the implementation of specific diets, as well as a vital scientific research device. Dr. Jonas Salk used it while developing his polio vaccine. In 1954, the millionth Waring Blendor was sold, and it is still popular today.[12]

Throughout his career, Fred Waring received many awards, but none was as illustrious as his last one. In 1983, the 83-year-old Waring – by now considered king of popular choral music – was awarded the Congressional Gold Medal, the nation's highest honor for a civilian.[2]

Fred Waring died suddenly of stroke on July 29, 1984 at the place where it all began – Penn State University – just after videotaping a concert with his ensemble and completing his annual summer choral workshop. He conducted many such workshops at Penn State in his later years, and in 1984, designated Penn State to house his collection of archives and memorabilia. He also served his alma mater as a trustee and was named a Distinguished Alumnus of the University. Although many believe that Waring Commons at Penn State is named for him, it is actually named for his grandfather, William Waring. In Long Beach, California, there is a Fred Waring Drive named for him. Another Fred Waring Drive is a major arterial road in the Palm Desert–Indio area of Southern California (where many major roads are named for post-World War II era entertainers).

The Waring Golf Course north of Harrisburg, Pennsylvania was named after Waring, and he had an ownership interest in it. It ceased operation around 1960.

In 1997, a Golden Palm Star on the Palm Springs, California, Walk of Stars was dedicated to him.[14]

File:Fredwaringtracy.jpg
Cartoon by Chester Gould from the Fred Waring Collection

Waring was a cartoon and comic strip collector, and a Penn State meeting room by the West Wing restaurant has dozens of cartoons drawn by artists such as Al Hirschfeld in Waring's honor.

From 1943 to 1974, Waring owned the Shawnee Inn and Country Club, a golf resort located at Shawnee on Delaware, Pennsylvania near Stroudsburg. In 1948, two years after the National Cartoonists Society was formed, Waring invited members of that organization to spend a day at the Shawnee Inn. It became an annual event, held each June for the next 25 years, resulting in a huge collection of artwork created for Waring by the cartoonists, including many drawn on Shawnee Inn stationery. The Lone Ranger artist Tom Gill recalled:

Fred Waring would hire these buses, and we would get onboard in Times Square. They would take us through the Holland Tunnel, along Route 80, to his house in Pennsylvania. We spent the whole weekend there. Ping pong, golf, tennis, swimming—he had it all.

Ed Cunard's grandmother managed the Shawnee Inn, and he quoted from a self-published book she had written:

You see, my grandmother was always a career woman. She started out working with Fred Waring at the height of his popularity (so, yes, this is going back quite a way). When she decided to settle down and marry, she left his music enterprise and went to manage the resort he owned in the Poconos. This much, I knew. I knew that she had met all sorts of celebrities and quasi-celebrities through these jobs, but there was one section that stood out to me: "It's the only autograph I have of all the celebrities I have met, except for autographed sketches by a couple of cartoonists. They came to Shawnee for an annual outing which Mr. Waring hosted every June to celebrate his birthday. When the National Cartoonists came to Shawnee, it was a time they all came together for a busman's holiday—golf and tennis during the day. After the evening entertainment provided by Mr. Waring, they charmed all of us with their inimitable style of humor and talent demonstrations. All the greats in that art field were there—Mort Walker, Stan Drake, Milt Caniff, Charles Schulz and many others. I can still visualize Hal Foster, on one of their trips, standing before a large easel in the lobby of the Inn drawing his famous Prince Valiant. In fact, I treasure a copy of that drawing which is truly more art than cartoon. We were so fortunate to witness such talent." It goes on for a while longer, detailing how the cartoonists would draw on the tables as part of their time at the resort, and that these sketches are available for viewing at Penn State's Fred Waring America Collection.[15]

The Cartoon Room was Waring's name for the lounge room of Shawnee Inn, where the Pennsylvanians and the cartoonists assembled for food, drink and entertainment. Special tables in the Cartoon Room featured original art because Waring had the cartoonists create drawings on parchment paper, which was permanently laminated on the 30" X 30" tabletops. The walls of the Cartoon Room and the long hallway leading to it displayed numerous cartoons. Today, the Fred Waring Collection at Penn State has more than 600 cartoon originals, including over 50 of the laminated table tops.

In the third-season M*A*S*H* episode "Springtime," when Hot Lips Houlihan sees Hawkeye Pierce in a tuxedo and tells him, "You're out of uniform," he replies, "I am not, I'm with Fred Waring!"

Warren Zevon's 1973 song "Poor Poor Pitiful Me" features a narrator who claims that he's "been put through some changes Lord, sort of like a Waring blender."

In the film A Christmas Story, Waring's music can be heard playing in the mall during the famous "Santa" scene.