Frederic William Farrar (7 August 1831 – 22 March 1903) was a cleric of the Church of England (Anglican), schoolteacher and author. He was a pallbearer at the funeral of Charles Darwin in 1882. He was a member of the Cambridge Apostles secret society. 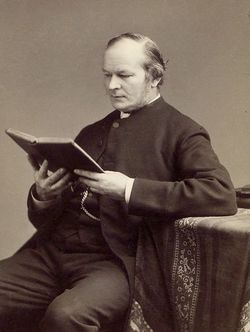 Portrait of Farrar, by Elliott & Fry.

Farrar was born in Bombay, India, and educated at King William's College on the Isle of Man, King's College London and Trinity College, Cambridge.[1] At Cambridge he won the Chancellor's Gold Medal for poetry in 1852.[2] He was for some years a master at Harrow School and, from 1871 to 1876, the headmaster of Marlborough College.

Farrar became successively a canon of Westminster and rector of St Margaret's, Westminster (the church next to Westminster Abbey), archdeacon of Westminster Abbey and the Dean of Canterbury; he also served as chaplain in ordinary.[3] He was an eloquent preacher and a voluminous author, his writings including stories of school life, such as Eric, or, Little by Little and St. Winifred's about life in a boys' boarding school in late Victorian England, and two historical romances.

Farrar was a classics scholar and a comparative philologist, who applied Charles Darwin's ideas of branching descent to the relationships between languages, engaging in a protracted debate with the anti-Darwinian linguist Max Müller.[4] While Farrar was never convinced by the evidence for evolution in biology, he had no theological objections to the idea and urged that it be considered on purely scientific grounds.[5] On Darwin's nomination, Farrar was elected to the Royal Society in 1866 for his philological work. When Darwin died in 1882, Farrar helped get the church's permission for him to be buried in Westminster Abbey and preached the sermon at his funeral.[5]

Farrar's religious writings included Life of Christ (1874), which had great popularity, and Life of St. Paul (1879). His works were translated into many languages, especially Life of Christ.

Farrar was a believer in universal reconciliation and thought that all people would eventually be saved, a view he promoted in a series of 1877 sermons.[6] He originated the term "abominable fancy" for the longstanding Christian idea that the eternal punishment of the damned would entertain the saved.[7] Farrar published Eternal Hope in 1878 and Mercy and Judgment in 1881, both of which defend Christian universalism at length.[8][9]

Farrar was accused of Universalism, but he denies this belief with great certainty. In 1877 Farrar in an introduction to five sermons he wrote, in the preface he attacks the idea that he holds to universalism. He also dismisses any accusation from those who would say otherwise. He says, "I dare not lay down any dogma of Universalism, partly because it is impossible for us to estimate the hardening effect obstinate persistance in evil, and the power of the human will to resist the love of God."[10]

In April 1882, he was one of ten pallbearers at the funeral of Charles Darwin in Westminster Abbey; the others were: The Duke of Devonshire, The Duke of Argyll, The Earl of Derby, Mr. J. Russell Lowell, Mr. W. Spottiswoode, Sir Joseph Hooker, Mr. A. R. Wallace, Professor Huxley, and Sir John Lubbock. 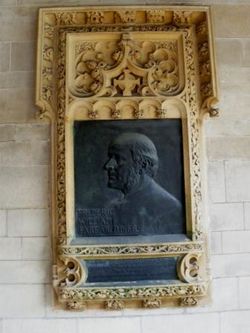 The memorial to Farrier at St Margaret's, Westminster

In 1860, he married Lucy Mary Cardew; they five sons and five daughters.[11] Farrar's daughter, Maud, was the mother of World War II British field marshal Bernard Montgomery. His son Reginald published a biography of Farrar in 1902.[5]

Farrar has a street named after him – Dean Farrar Street in Westminster, London. There is also a memorial to him at the church of St Margret's, Westminster by the sculptor Nathaniel Hitch.