Frederica Smith Wilson (born Frederica Patricia Smith; November 5, 1942) is an American politician who has been a member of the United States House of Representatives since 2011. Located in South Florida, Wilson's congressional district—numbered the 17th during her first two years in Congress, and the 24th since 2013—is a majority African-American district that includes the southern parts of Broward County and the eastern parts of Miami-Dade County. Included within the district are Pembroke Pines, Hollywood, Miramar, and North Miami. She gained national attention in early 2012 as a result of her high-profile comments on the killing of Trayvon Martin, who was a constituent of hers and whose family she knew personally.[citation needed]

Wilson, who describes herself as a "voice for the voiceless", is a member of the Democratic Party.[1] Her seat was left open when the incumbent Kendrick Meek ran for a seat in the Senate in 2010.

Wilson is famous for her large and colorful hats, of which she owns several hundred. She has gone through efforts to get Congress to lift its ban on head coverings during House sessions, which dates back to 1837.[2][3]

Wilson was born Frederica Smith on November 5, 1942 in Miami, Florida, the daughter of Beulah (née Finley) and Thirlee Smith. Her maternal grandparents were Bahamian.[4][5] Wilson earned her bachelor of arts degree from Fisk University in 1963,[6] and her master of arts degree from the University of Miami in 1972.[7] She served as the Principal of Skyway Elementary School in Miami. She served on the Miami-Dade County School Board from 1992 through 1998.

An early supporter, in 2008 she voted for Barack Obama and Joe Biden as one of Florida's presidential electors.[8] 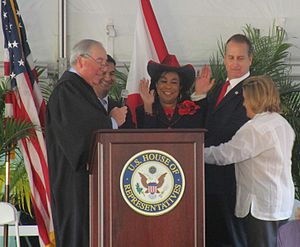 When Kendrick Meek retired from Florida's 17th congressional district to run for the United States Senate in 2010, Wilson ran for the open seat, and won the Democratic nomination to face her Republican challenger to win Meek's seat.[9] On November 2, 2010 she won in the general election without electoral opposition, in a district where the Democratic nomination is tantamount to election.

Wilson's signature issue is education. During her career as an educator, she founded the 5000 Role Models program, which seeks to bring down dropout rates. Since her time in the Florida legislature, she has strongly opposed standardized testing.[10] She has expressed concern with the FCAT, saying the value of the test is not worth the cost of administering it. She suggested banning the tutoring companies from exploiting vulnerable children, "even if it means banning companies like Ignite! Learning, founded by ex-Governor Jeb Bush's brother, Neil".[11]

Frederica Wilson has taken a vocal opposition to the Tea Party. At a Miami town hall meeting, she told citizens to remember that the Tea Party is the real enemy and that they hold Congress hostage. She expressed her belief that they have one goal in mind: "to make President Obama a one-term president."[12]

Wilson took a vocal stance on the killing of Trayvon Martin, who was a constituent of hers and whose family she says she has known all her life. She has been both praised and criticized for stating shortly after the killing that the motive of the accused, George Zimmerman, was racism. Her most repeated quote was "Trayvon Was hunted down like a rabid dog. He was shot in the street." She called for Zimmerman's arrest “for his own safety.”[13] For making this suggestion, she received criticism from conservative quarters. A Breitbart piece noted the only way somebody can be imprisoned for their own safety is if they are a threat to themselves. They cited that the Constitution "expressly forbids such measures under the Fourth Amendment and the only excuse for a criminal arrest is probable cause."[14]

In March 2012, Wilson said "Justice must be served. No more racial profiling!"[15] She also went to the House floor and called for the "murderer" to be arrested, saying it was an ovious case of racial profiling.[16] Wilson organized a rally in Miami on April 1, 2012, calling for Zimmerman's imprisonment. She criticized Florida's self-defense gun law, the so-called Stand Your Ground law, in the wake of Martin's killing, sharing her sentiment that when new laws go on the books, and they work against the people, the laws "should be looked at and repealed."[17] In April 2012, Wilson said that the death of Martin was "definitely" murder.[18]

Concern had been raised about Wilson's outspoken comments, with some asking if her rhetoric was "making it more difficult for the prosecutor to do her job."[19] Wilson has been calling for tougher laws to prevent the racial profiling that led to Martin's death.[20]

Further information: List of hazing deaths in the United States

Wilson led efforts to combat bullying and hazing both as the South Atlantic Regional Director for Alpha Kappa Alpha Sorority and as a member of Congress.[21] A Miami Herald reporter nicknamed her "The Haze Buster" for her public stance against hazing. She was part of a coalition of African-American fraternity and sorority leaders who launched an anti-Hazing campaign after the 2011 death of Florida A&M drum major Robert Champion Jr.[22]

Wilson is widowed. She has three children.[7] Wilson is an avid wearer of hats. She has a large collection that includes hundreds of hats of all different varieties. She wears one every day to honor her late grandmother. She has asked House Speaker John Boehner to waive the rule prohibiting the wearing of hats on the floor of the House of Representatives, a rule in place since 1837.[2]