From Infogalactic: the planetary knowledge core
(Redirected from Frederick, Hereditary Prince of Denmark and Norway)
Jump to: navigation, search

Frederick, Hereditary Prince of Denmark (Danish: Frederik; 11 October 1753 – 7 December 1805) was heir presumptive to the thrones of Denmark and Norway. He was the surviving son of King Frederick V by his second wife, Juliana Maria of Braunschweig-Wolfenbüttel.

Hereditary Prince Frederick acted as regent on behalf of his half-brother King Christian VII from 1772 to 1784.

Frederick was born at Christiansborg Palace in Copenhagen on 11 October 1753. To provide for his future position, at the age of 3 he was elected coadjutor in the Prince-Bishopric of Lübeck. This meant that in time he would succeed the Prince-Bishop then in office, Frederick August. This plan had to be abandoned, however, and Frederick stayed in Denmark as a junior member of the royal family.

Regent of the kingdom 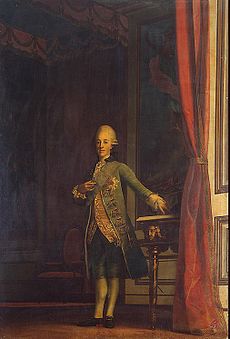 Hereditary Prince Frederick, Regent of the Kingdom by Vigilius Eriksen.

His elder half-brother, King Christian VII, suffering from a severe mental illness (believed to have been schizophrenia), and having been divorced from his wife, Caroline Matilda of Great Britain (who was then exiled), Prince Frederick was designated as regent of Denmark in 1772, when 18 years old. His regency was mostly nominal, the power being held by his mother, Queen Juliane Marie, and minister Ove Høegh-Guldberg.

He acted as regent until the coup of 1784, when his 16-year-old half-nephew Frederick (the future King Frederick VI), took power and regency. 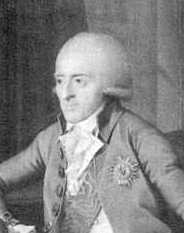 After the coup, Frederick was left without much influence at the court. As his half-nephew did not have any surviving sons, Hereditary Prince Frederick again became heir presumptive to the throne on the death of his half-brother and accession of his half-nephew. Eventually, his son Christian Frederick would succeed Frederick VI as king.

Prince Frederick is an important character in Norah Lofts' historical novel The Lost Queen (1969), chronicling the tragic marriage of King Christian VII and Queen Caroline Matilda. The book suggests that Frederick was himself in love with the Queen and jealous of her lover Johann Friedrich Struensee - which is not firmly attested in historical sources.