Weyand was commissioned a second lieutenant through the Reserve Officers Training Corps program at the University of California at Berkeley, where he graduated in May 1938. He married Arline Langhart in 1940. 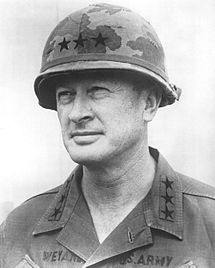 From 1940 to 1942, Weyand was assigned to active duty and served with the 6th Field Artillery. He graduated from the Command and General Staff College at Fort Leavenworth in 1942 and served as adjutant of the Harbor Defense Command in San Francisco from 1942 to 1943. He moved on to the Office of the Chief of Intelligence for the US War Department General Staff in 1944. He became assistant chief of staff for intelligence in the China-Burma-India Theater from 1944 to 1945. In the immediate aftermath of the war he was in the Military Intelligence Service in Washington DC from 1945 to 1946.

Service After World War II and During the Korean War

He was chief of staff for intelligence, United States Army Forces, Middle Pacific from 1946 to 1949. He graduated from the U.S. Army Infantry School at Fort Benning in 1950. He became commander of the 1st Battalion, 7th Infantry Regiment and the assistant chief of staff, G–3, of the 3d Infantry Division during the Korean War from 1950 to 1951.

Prior to the Vietnam War

He served on the faculty of the Infantry School from 1952 to 1953. Following this assignment he attended the Armed Forces Staff College, and upon graduation became military assistant in the Office of the Assistant Secretary of the Army for Financial Management until 1954. He moved on to become military assistant and executive to the Secretary of the Army from 1954 to 1957. He then graduated from the Army War College in 1958, moving on to command the 3d Battalion, 6th Infantry Regiment, in Europe (1958–1959). He served in the Office of the United States Commander in Berlin in 1960 then became chief of staff for the Communications Zone, United States Army, Europe from 1960 to 1961. He was the deputy chief and chief of legislative liaison for the Department of the Army from 1961 to 1964.

Weyand became commander of the 25th Infantry Division, stationed in Hawaii, in 1964. He continued to lead the division as it was introduced into operations in Vietnam in 1965 and 1966. He served as the head of the 25th Division until 1967, when he became deputy, then acting commander, and finally commander of II Field Force, Vietnam responsible for III Corps Tactical Zone comprising the 11 provinces around Saigon. In 1968, he became chief of the Office of Reserve Components.

A dissenter from General William Westmoreland's more conventional war strategy, Weyand's experience as a former intelligence officer gave him a sense of the enemy's intentions. He realized that "the key to success in Vietnam was in securing and pacifying the towns and villages of South Vietnam" (Mark Salter, John McCain "Hard Call: The Art of Great Decisions"). Weyand managed to convince a reluctant General Westmoreland to allow him to redeploy troops away from the Cambodian border area closer to Saigon, significantly contributing to making the 1968 Tet Offensive a military catastrophe for North Vietnam[citation needed].

In 1969, he then was named the military advisor to Ambassador Henry Cabot Lodge at the Paris Peace Talks. 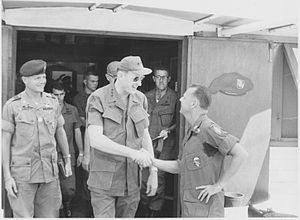 In 1970 he became assistant chief of staff for force development. Later in 1970, he became deputy commander and commander of the Military Assistance Command, Vietnam. He succeeded General Creighton Abrams, who was appointed as Army Chief of Staff, as commander of MACV on June 30, 1972. By the end of 1972 General Weyand had overseen the withdrawal of all United States military forces from South Vietnam. In March 1973, Weyand was awarded the National Order of Vietnam, first class and the Gallantry Cross second class.[3]

Post-Vietnam Commands and Chief of Staff

In an editorial in The New York Times on December 11, 2006, Murray Fromson, a reporter for CBS during the Vietnam War, stated that General Weyand had agreed to reveal himself as the confidential source for New York Times reporter R.W. Apple, Jr.'s August 7, 1967 story "Vietnam: The Signs of Stalemate." General Weyand, then commander of III Corps in Vietnam, was the unidentified high-ranking officer, who told Apple and Fromson (reporting the same story for CBS) that "I’ve destroyed a single division three times . . . I’ve chased main-force units all over the country and the impact was zilch. It meant nothing to the people. Unless a more positive and more stirring theme than simple anti-communism can be found, the war appears likely to go on until someone gets tired and quits, which could take generations." This story was the first intimation that war was reaching a stalemate, and contributed to changing sentiment about the war.[4] 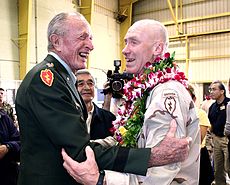 After retiring from the U.S. Army in 1976, Weyand moved to Honolulu, Hawaii, which was also the home of the 25th Infantry Division. He became active in Hawai'i community affairs and held a number of prominent business positions, including corporate secretary and senior vice president of First Hawaiian Bank between 1976 and 1982. He was an active member of the Rotary Club of Honolulu and a trustee of the now-dissolved Samuel M. Damon Estate, as well as the American Red Cross Hawaii Chapter, where he served as chairman of the board in 1992 and director of the Honolulu Symphony. He was active in the Sony Open golf tournament, Shriners Club, the East-West Center, the Asia-Pacific Center for Security Studies, and the Hawaii Theatre.

Weyand died on February 10, 2010 of natural causes at the Kahala Nui retirement residence in Honolulu, Hawaii.[5] He was survived by his wife Mary Weyand, whom he married after his first wife died in 2001, three children, two stepdaughters and two stepsons, and ten grandchildren.