Frederick County is included in the Washington-Arlington-Alexandria, DC-VA-MD-WV Metropolitan Statistical Area. As a result, the county has experienced a rapid population increase in recent years.[3][4] The county is sometimes associated with Western Maryland, depending on the definition used. It borders the southern border of Pennsylvania and the northeastern border of Virginia.

The county is home to Catoctin Mountain Park (encompassing the presidential retreat Camp David) and to the U.S. Army's Fort Detrick. It has also been the home to several celebrated historical figures like Francis Scott Key, Thomas Johnson, Roger B. Taney, and Barbara Fritchie.

The namesake of Frederick County and its county seat is unknown, but it probably was either Frederick, Prince of Wales or Frederick Calvert, 6th Baron Baltimore.[5]

Frederick County was created in 1748 from parts of Prince George's County and Baltimore County.

The county has a number of properties on the National Register of Historic Places.[6]

Until 2014, Frederick County was governed by county commissioners, the traditional form of county government in the state of Maryland.

Effective December 1, 2014, Frederick County transitioned to a "charter home rule government".[7] The voters approved this governmental change on the November 6, 2012 election with 62,469 voting for the transition and 37,368 voting against.[8]

A county executive is responsible for providing direction, supervision, and administrative oversight of all executive departments, agencies, and offices. A county council will also be elected, made up of seven members: five based on district and two at-large.[8]

The members of the first Frederick County Council for the term beginning 2014 are:[10][11]

The sheriff of Frederick County is Republican Chuck Jenkins.[10]

The Executive Director for the Frederick County Office of Economic Development is Laurie Boyer.

Frederick County has not voted for a Democrat for president since 1964 when it voted for Lyndon B. Johnson. In 2004 George W. Bush defeated John Kerry 59-39%.[13] Democrats came closer in 2008, when John McCain defeated Barack Obama by a mere 1,157 votes (49.62–48.58).[14] Nevertheless, Republicans in Frederick rebounded to more historical levels in the 2010 Maryland Gubernatorial & Senatorial Elections, giving the Republican Ehrlich/Kane ticket 55% to Democrat O'Malley/Brown's 45. Frederick voters also supported Republican Senate challenger Eric Wargotz over incumbent Democratic Senator Barbara A Milkulski by a margin of 51–46, even as Mikulski was winning statewide by a landslide 61-37. Despite its conservative reputation, Frederick County voted in favor of Maryland Question 6, which legalized same-sex marriage in Maryland. In the 2014 Maryland Gubernatorial race Republican Larry Hogan won Frederick County strongly with 63% of the vote compared to Democrat Anthony Brown's 35%[15]

Frederick County straddles the boundary between the Piedmont Plateau Region and the Appalachian Mountains. The county's two prominent ridges, Catoctin Mountain and South Mountain, form an extension of the Blue Ridge. The Middletown Valley lies between them.

Attractions in the Frederick area include the Clustered Spires, a monument to Francis Scott Key, the National Museum of Civil War Medicine, Monocacy National Battlefield and South Mountain battlefields, and the Schifferstadt Architectural Museum.

According to the 2010 U.S. Census, the ethnic makeup of the county was as follows:

There were 84,800 households out of which 37.6% had children under the age of 18 living with them, 57.8% were married couples living together, 10.0% had a female householder with no husband present, and 27.8% were non-families. 22.0% of all households were made up of individuals and 7.8% had someone living alone who was 65 years of age or older. The average household size was 2.70 and the average family size was 3.17.

The United States Census Bureau has reported the following data for Frederick County.[24]

According to the Maryland Department of Business and Economic Development, the following are the principal employers in Frederick County. This list excludes U.S. post offices and state and local governments, but includes public institutions of higher education.[25]

Frederick County leads Maryland in milk production; the county's dairy herds account for one-third of the state's total.[26] However, the dairy market is unstable, and the Frederick County, like the state more broadly, has lost dairy farms.[27] 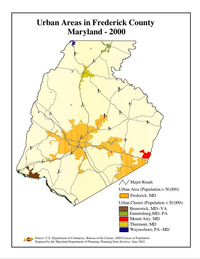