Frederick was the eldest of the seven children of Frederick I, Elector of Saxony, and Catherine of Brunswick and Lunenburg.

After the death of his father in 1428 he took over the government together with his younger brothers William III, Henry and Sigismund. In 1433 the Wettins finally concluded peace with the Hussites. In 1438 it was considered the first federal state parliament of Saxony. The parliament received the right to find together in case of innovations in fiscal matters also without summoning by the ruler. 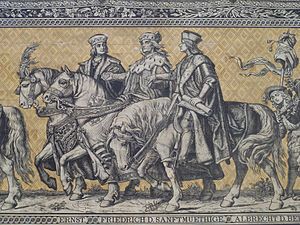 After Henry's death in 1435, and Sigismund was forced to renounce and became a bishop in (1440), Frederick and William divided their possessions. In the Division of Altenburg in 1445, William III received the Thuringian and Frankish part, and Frederick got the Eastern part of the principality. The mines remained common possessions. Disputes over the distribution led however in 1446 to the Saxon Brother War, which found an end only on 27 January 1451 with the peace of Naumburg. In the Treaty of Eger in (1459), elector Frederick, Duke William III and the king of Bohemia George of Podebrady fixed the borders between Bohemia and Saxony, at the height of the Ore Mountains (German: Erzgebirge) and the middle of the Elbe which still holds today. It belongs therefore to the oldest still existing borders of Europe.

After the death of Frederick, both of his sons, Ernest and Albert, first took over the government together. After Duke William III died in 1482, Thuringia returned to Frederick's line.

In Leipzig on 3 June 1431 Frederick married Margaret of Austria, the daughter of Ernest of Austria and Cymburgis of Masovia. They had eight children: