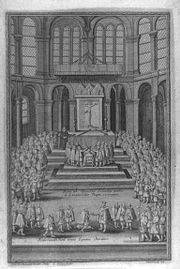 Frederick II was the son of King Christian III of Denmark and Norway and Dorothea of Saxe-Lauenburg. Frederick II stands as the typical renaissance ruler of Denmark. Unlike his father, he was strongly affected by military ideals. Already as a young man he made friendship with German war princes. He had desired to marry his mistress, Anne of Hardenberg, but was finally persuaded not to. Shortly after his succession he won his first victory by the conquest of Dithmarschen in the summer of 1559.

From his predecessor, he inherited the Livonian War, where he installed his younger brother Magnus of Holstein, whom he considered troublesome, in the Bishopric of Ösel–Wiek. Else, he largely tried to avoid conflict in Livonia and consolidated amicable relations to Ivan IV of Russia in the 1562 Treaty of Mozhaysk. The dominating conflict of his rule was the Scandinavian Seven Years' War from 1563 to 1570, in which he tried in vain to conquer Sweden, which was ruled by his cousin, the insane King Eric XIV. It developed into an extremely expensive war of attrition in which the areas of Scania were ravaged by the Swedes and Norway was almost lost. During this war the king led his army personally on the battlefield but without much result and the conflict damaged his relationship to his noble councillors. However, internal unrest in Sweden and the taking over of Danish administration by the able Steward of the Realm Peder Oxe stabilised the situation. After Erik's successor John III of Sweden refused to accept a peace favoring Denmark in the Treaties of Roskilde (1568), the war dragged on until it was ended by a status quo peace in the Treaty of Stettin (1570) that let Denmark save face but also showed the limits of Danish military power.

After the war Frederick kept the peace without giving up his attempt of trying to expand his prestige as a naval ruler. His foreign politics were marked by a moral support of the Protestant powers – in his time as a bachelor he wooed Queen Elizabeth I of England, an initiative which made him Knight of the Garter – but at the same time by a strict neutrality. Councillors of experience like Peder Oxe, Niels Kaas, Arild Huitfeldt and Christoffer Valkendorff took care of the domestic administration.[2]

As a person Frederick was described as hot-headed, vain, courageous and ambitious. He was a lover of hunting, wine, women and feasts and at his death it was a common opinion that he had drunk himself to death. He rebuilt Kronborg castle in Elsinore between 1574 and 1585. In 1567[3] he founded Fredrikstad in Norway. Frederik II upper secondary school in Fredrikstad, one of the largest schools of its kind in Norway, is named after Frederick.

This was a period of affluence and growth in Danish history. Frederick was also a major patron and close personal friend of the famous astronomer Tycho Brahe (whose step-father Jørgen Thygesen Brahe had rescued Frederick from drowning, catching pneumonia and dying as a result).[4] On 4 April 1588 he died and was succeeded by his eldest son Christian IV. He was interred in Roskilde Cathedral.[5]

On 20 July 1572 he was married to Sophia of Mecklenburg-Güstrow, a descendant of King John of Denmark, and also his own first half-cousin, through their grandfather, Frederick I, King of Denmark and Norway. They had eight children: