Frederick James Kroesen, Jr. (born February 11, 1923) is a United States Army four-star general and was the Commanding General of the Seventh United States Army and the commander of NATO Central Army Group from 1979 to 1983, and Commanding General, United States Army Forces Command from 1976 to 1978. He also served as Vice Chief of Staff of the Army from 1978 to 1979. He commanded troops in World War II, the Korean War, and the Vietnam War, enabling him to be one of the very small number who ever was entitled to wear the Combat Infantryman Badge with two Stars, denoting active combat in three wars.

Born in Phillipsburg, New Jersey,[1] Kroesen is a 1944 graduate of Rutgers University, where he earned a Bachelor of Science degree in Agriculture. He earned Bachelor of Arts (1962) and Master of Arts (1966) degrees in International Affairs at George Washington University. He is a member of the Sons of the American Revolution based on the service of his grandfather, Johannes Kroesen, who served as a second lieutenant in the Bucks County Pennsylvania Militia during the Revolutionary War. In addition, he is also a member of Delta Upsilon fraternity to which his membership traces back to his days at Rutgers University.

General Kroesen fought in World War II with the 254th Infantry Regiment of the 63rd Infantry Division. He was a company grade officer, serving as platoon leader and company commander, in the fighting in the Colmar Pocket and into Germany. He participated in the particularly tough fighting in Jebsheim.

As Commander of the United States Army Forces Command

General Kroesen was injured in Heidelberg on September 15, 1981, when his armoured Mercedes was targeted with an RPG-7 anti-tank rocket. Responsibility for the attack was claimed by the "Kommando Gudrun Ensslin" of the Red Army Faction (aka Baader-Meinhof Gang).[2][3] In 1991, West German prosecutors announced that former East German secret police leader Erich Mielke had been indicted for collusion with the attack.[4]

After retiring from the Army in 1983, Kroesen became a businessman.[5] He is currently chairman of the board of Military Professional Resources Inc. and a senior fellow at the Institute of Land Warfare of the Association of the United States Army. He is additionally the Vice-President of the American Security Council Foundation. 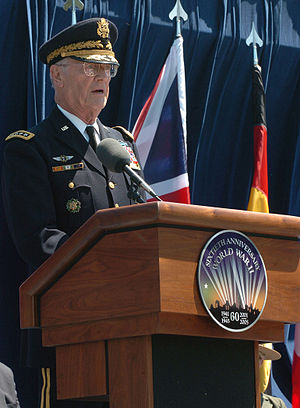