Frederick James Marquis, 1st Earl of Woolton, CH, PC (23 August 1883 – 14 December 1964) was an English businessman, statesman and politician. A successful department store owner and wartime Minister of Food, Lord Woolton became Conservative Party Chairman from 1946 to 1955. He rebuilt the local organisations with an emphasis on membership, money and a unified national propaganda appeal on critical issues. To broaden the base of potential candidates, the national party provided financial aid to candidates, and assisted the local organisations in raising local money. Woolton also proposed changing the name of the party to the Union Party, but when that suggestion fell on deaf ears he instead emphasised a rhetoric that characterised opponents as "Socialist" rather than "Labour". He is given significant credit for the Conservative victory in 1951, their first since 1935.[1]

Lord Woolton was born at 163 West Park Street in Ordsall, Salford, Lancashire, in 1883 to Thomas Robert Marquis (died 1944) and his wife, Margaret Marquis née Ormerod. Educated at Manchester Grammar School and the University of Manchester (where he was a Research Fellow), Woolton was an active member of the Unitarian Church. He was active in social work in Liverpool (1906–1918)

He was an executive of Lewis's department store in Liverpool (1928–1951), becoming Managing Director. He was knighted in 1935 and was awarded a peerage in 1939 for his contribution to British industry. Despite his wishes, he was informed that it was not possible to be Baron Marquis (because "Marquess", or "Marquis", is another grade of the peerage of the United Kingdom) and so he took the title Baron Woolton after the Liverpool suburb of that name in which he had lived. He subsequently served on a number of government committees (including the Cadman committee). He refused to affiliate himself with any political party. 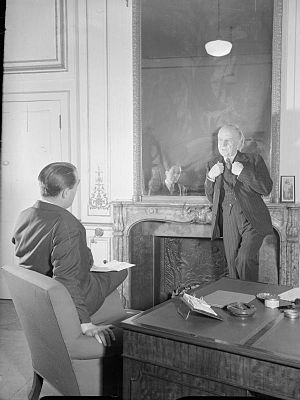 Lord Woolton (right) being interviewed in London in 1944

In April 1940 he was appointed as Minister of Food by Neville Chamberlain, one of a number of ministerial appointments from outside politics. Woolton retained this position until 1943. He supervised 50,000 employees and over a thousand local offices where people could obtain ration cards. His ministry had a virtual monopoly of all food sold in Britain, whether imported or local. His mission was to guarantee adequate nutrition for everyone. With food supplies cut sharply because of enemy action and the needs of the services, rationing was essential. Woolton and his advisors had one scheme in mind but economists convinced them to instead try point rationing. Everyone would have a certain number of points a month that they could allocate any way they wanted. The experimental approach to food rationing has been considered successful; indeed, food rationing was a major success story in Britain's war.[2]

In late June 1940, with a German invasion threatened, Woolton reassured the public that emergency food stocks were in place that would last "for weeks and weeks" even if the shipping could not get through. He said "iron rations" were stored for use only in great emergency. Other rations were stored in the outskirts of cities liable to German bombing.[3] When the Blitz began in late summer 1940 he was ready with more than 200 feeding stations in London and other cities under attack.[4]

Woolton was faced with the task of overseeing rationing due to wartime shortages. He took the view that it was insufficient to merely impose restrictions but that a programme of advertising to support it was also required. He warned that meat and cheese, as well as bacon and eggs, were in very short supply and would remain that way. Calling for a simpler diet, he noted that there was plenty of bread, potatoes, vegetable oils, fats and milk.[5]

By January 1941 the usual overseas food supply had fallen in half. However, by 1942 ample food supplies were arriving through Lend Lease from the U.S. and a similar Canadian programme. Lend Lease was a gift and there was no charge. Most food was now rationed. Worried about children, he made sure that by 1942 Britain was providing 650,000 children with free meals at schools; about 3,500,000 children received milk at school, in addition to priority supplies at home. The bad news was that his "national loaf" of wholemeal brown bread replaced the ordinary white variety, to the distaste of most housewives.[6] Children learned that sweets supplies were reduced to save shipping space.[7]

Woolton kept food prices down by subsidizing eggs and other items. He promoted recipes that worked well with the rationing system, most famously the "Woolton pie", which consisted of carrots, parsnips, potatoes and turnips in oatmeal, with a pastry or potato crust and served with brown gravy. Woolton's business skills made the Ministry of Food's difficult job a success and he earned a strong personal popularity despite the shortages.[8]

He joined the Privy Council in 1940 and became a Companion of Honour in 1942. In 1943 Woolton entered the War Cabinet as Minister of Reconstruction, taking charge of the difficult task of planning for post-war Britain and in this role he appeared on the cover of Time on the issue of 26 March 1945.

In May 1945 he was included in Churchill's "Caretaker" government as Lord President of the Council, but in July the government fell when Churchill lost the 1945 general election. The very next day Woolton joined the Conservative Party and was soon appointed Party Chairman, with the job of improving the party's organisation in the country and revitalising it for future elections. Under Woolton many sweeping reforms were carried out and when the Conservatives returned to government in 1951, Woolton served in the Cabinet for the next four years.

In May 1950, Woolton, with Churchill's approval, called for a kind of coalition with the Liberal Party based on nine principles he said they agreed upon:[9]

In 1956 he was further honoured when he became Earl of Woolton with the subsidiary title Viscount Walberton.[12]

He died 14 December 1964 at his home, Walberton House, in Arundel, Sussex. His titles passed to his son, Roger. He is buried at St Mary's Church, Walberton, Sussex.[13]