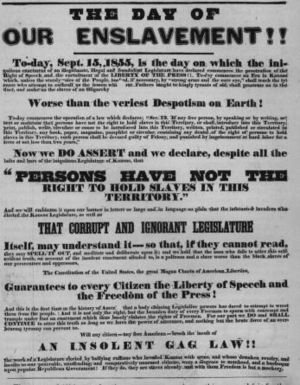 Free-Staters were those settlers in Kansas Territory during the Bleeding Kansas era in the 1850s who opposed the extension of slavery to Kansas. The name derives from the term "free state", that is, a U.S. state without slavery.

Many Free-Staters were abolitionists from New England, in part because there was an organized emigration of settlers to Kansas Territory arranged by the New England Emigrant Aid Company beginning in 1854. Other Free-Staters were abolitionists who came to Kansas Territory from Ohio, Iowa, and other midwestern states. Holton, Kansas was named for the Milwaukee, Wisconsin free-stater Edward Dwight Holton.[1]

However, the majority of Free-Staters, regardless of where they were from, did not claim to be abolitionists at the outset. Instead, the official Free-State line supported the idea of excluding all Black people from the state of Kansas.[citation needed] This was mainly to ensure free soil (the main interest of northern free state settlers) for themselves rather than expansive plantations run by proslavery southerners. What united the Free-Staters was a desire to defeat the proslavery Southern settlers in Kansas Territory on the question of whether Kansas would be admitted to the Union as a slave state. (The Kansas–Nebraska Act of 1854 had left the question open to the settlers in the territory.)

Pro-slavery Southerners in Kansas Territory painted all Free-Staters as abolitionists in order to motivate the South's opposition. However, Eli Thayer and other New England Company leaders denied that they were seeking to abolish slavery, and the failed Topeka Constitution drafted by the Free-Staters in 1855 would have excluded any black person – slave or free – from settling in Kansas.

As time passed and the violence in Bleeding Kansas escalated, abolitionists became ascendent in the Free-State movement. In 1858, the Free-Staters proposed a second constitution, the Leavenworth Constitution, which banned slavery and also would have given the right to vote to black men, though this constitution also failed because of unresolved conflict between the two sides. Kansas became a state in 1861 after a free state constitution (from a conference in Wyandotte in 1859) was agreed upon.