From Infogalactic: the planetary knowledge core
(Redirected from Free Church of Scotland (1843-1900))
Jump to: navigation, search 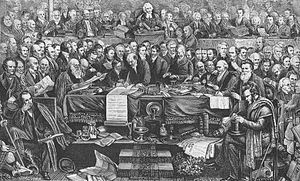 Signing The Deed Of Demission 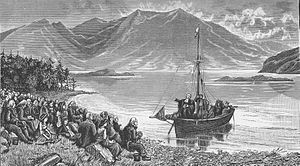 A minister of the Free Church preaching the Gospel in the 1840s before its own churches were built.

The Free Church was formed by Evangelicals who broke from the Church of Scotland in 1843 in protest against what they regarded as the state's encroachment on the spiritual independence of the Church.

The Disruption of 1843 was a bitter, nationwide schism which broke the established Church of Scotland in half and lasted until 1929. The evangelical element had been demanding the purification of the Church, and it attacked the patronage system, which allowed rich landowners to select the local ministers. It became a political battle between evangelicals on one side and the "Moderates" and gentry on the other. The evangelicals secured passage by the church's General Assembly in 1834, of the "Veto Act", asserting that, as a fundamental law of the Church, no pastor should be forced by the gentry upon a congregation contrary to the popular will, and that any nominee could be rejected by majority of the heads of families. This direct blow at the right of private patrons was challenged in the civil courts, and was decided (1838) against the evangelicals. In 1843, 450 evangelical ministers (out of 1,200 ministers in all) broke away, and formed the Free Church of Scotland. Led by Dr. Thomas Chalmers (1780–1847), a third of the membership walked out, including nearly all the Gaelic-speakers and the missionaries, and most of the Highlanders. The established Church kept all the properties, buildings and endowments. The seceders created a voluntary fund of over £400,000 to build 700 new churches; 400 manses (residences for the ministers) were erected at a cost of £250,000; and an equal or larger amount was expended on the building of 500 parochial schools, as well as a college in Edinburgh. After the passing of the Education Act of 1872, most of these schools were voluntarily transferred to the newly established public school-boards.[1][2]

Chalmers' ideas shaped the breakaway group. He stressed a social vision that revived and preserved Scotland's communal traditions at a time of strain on the social fabric of the country. Chalmers's idealised small equalitarian, kirk-based, self-contained communities that recognised the individuality of their members and the need for co-operation. That vision also affected the mainstream Presbyterian churches, and by the 1870s it had been assimilated by the established Church of Scotland. Chalmers's ideals demonstrated that the church was concerned with the problems of urban society, and they represented a real attempt to overcome the social fragmentation that took place in industrial towns and cities.[3]

The first task of the new church was to provide income for her initial 500 ministers and places of worship for her people. As she aspired to be the national church of the Scottish people, she set herself the ambitious task of establishing a presence in every parish in Scotland (except in the Highlands, where FC ministers were initially in short supply.)

The building programme produced 470 new churches within a year and over 700 by 1847. Manses and over 700 schools soon followed. This programme was made possible by extraordinary financial generosity, which came from the Evangelical awakening and the wealth of the emerging middle class.

The church created a Sustentation Fund, the brainchild of Thomas Chalmers, to which congregations contributed according to their means, and from which all ministers received an 'equal dividend'. This fund provided a modest income for 583 ministers in 1843/4, and by 1900 was able to provide an income for nearly 1200. This centralising and sharing of resources was previously unknown within the Protestant churches in Scotland, but later became the norm. 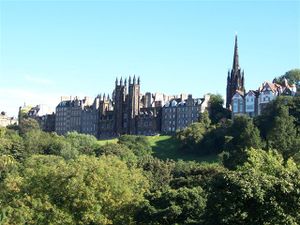 Great importance was attached to maintaining an educated ministry within the Free Church. Because the established Church of Scotland controlled the divinity faculties of the universities, the FC set up its own colleges. New College was opened in 1850 with five chairs; Christ's College and Trinity College (1856) followed later. The first generation of teachers were enthusiastic proponents of Westminster Calvinism. This position was soon abandoned, as theologians such as Dr A. B. Bruce, Marcus Dods and George Adam Smith began to teach a more liberal understanding of the faith. 'Believing criticism' of the Bible was a central approach taught by such as William Robertson Smith. Attempts were made between 1890 and 1895 to bring many of these professors to the bar of the Assembly on charges of heresy, but these moves failed, with only minor warnings being issued.

In 1892 the Free Church, following the example of the United Presbyterian Church and the Church of Scotland, passed a Declaratory Act relaxing the standard of subscription to the confession, with the result that a small number of congregations and even fewer ministers, mostly in the Highlands, severed their connection with the church and formed the Free Presbyterian Church of Scotland.

The Free Church of Scotland became very active in foreign missions. Many of the staff from the established Church of Scotland's India mission adhered to the Free Church. The church soon also established herself in Africa, with missionaries such as James Stewart (1831-1905) and with the co-operation of Robert Laws (1851-1934) of the United Presbyterian Church,[4] as well as becoming involved in evangelisation of the Jews. Her focus on mission resulted in one of the largest missionary organisations in the world.[citation needed]

Members of the Free Church also became associated with the colonisation of New Zealand: the Free Church offshoot the Otago Association sent out emigrants in 1847 who established the Otago settlement in 1848.[5]

Home mission also gained prominence. Thomas Chalmers led the way with a territorial mission in Edinburgh's West Port (1844- ),[6] which epitomised his idea of a "godly commonwealth". Free churchmen were at the forefront of the 1859 Revival as well as of the Moody and Sankey's campaign of 1873–1875 in Britain. However, Chalmers's social ideas were never fully realised, as the gap between the church and the urban masses continued to increase.

Towards the end of the 19th century, Free Churches sanctioned the use of instrumental music. An association formed in 1891 to promote order and reverence in public services. In 1898 it published A New Directory for Public Worship[7] which, while not providing set forms of prayer, offered directions. The Free Church took an interest in hymnology and church music, which led to the production of The Church Hymnary.

Unions and relationships with other Presbyterians

Timeline showing the evolution of the churches of Scotland from 1560

From its inception, the Free Church claimed it was the authentic Church of Scotland. Constitutionally, despite the Disruption, she continued to support the establishment principle. However, this support quickly disappeared and many joined the United Presbyterian Church in calling for the Disestablishment of the Church of Scotland.

In 1852 the Original Secession Church joined the Free Church; in 1876 most of the Reformed Presbyterian Church followed suit. However, a leadership-led attempt to unite with the United Presbyterians was not successful. These attempts began as early as 1863 when the Free Church began talks with the UPC with a view to a union. However, a report laid before the Assembly of 1864 showed that the two churches were not agreed as to the relationship between state and church. The Free Church maintained that national resources could be used in aid of the church, provided that the state abstain from all interference in its internal government. The United Presbyterians held that, as the state had no authority in spiritual things, it was not within its jurisdiction to legislate as to what was true in religion, prescribe a creed or any form of worship for its subjects, or to endow the church from national resources. Any union would therefore have to leave this question open. At the time this difference was sufficient to preclude the union being pursued.

In the following years the Free Church Assembly showed increasing willingness for union on these open terms. However, the 'establishment' minority prevented a successful conclusion during the years between 1867–73. After negotiations failed in 1873, the two churches agreed a 'Mutual Eligibility Act' enabling a congregation of one denomination to call a minister from the other.

During this period the antidisestablishmentarianism party continued to shrink and became increasingly alienated. This decline was hastened when some congregations left to form the Free Presbyterian Church of Scotland in 1893.

Starting in 1895, union began to be officially discussed once more. A joint committee made up of men from both denominations noted remarkable agreement on doctrinal standards, rules and methods. After a few concessions from both sides, a common constitution was agreed. However, the ever-decreasing minority in the Free Church Assembly protested, and threatened to test its legality in the courts.

The respective assemblies of the churches met for the last time on 30 October 1900. On the following day the union was completed, and the United Free Church of Scotland came into being.

However, a minority of those who dissented remained outside the union, claiming that they were the true Free Church and that the majority had departed from the church when they formed the UFC. After a protracted legal battle, the House of Lords found in favour of the minority (in spite of the belief of most that the true kirk is above the state) and awarded them the right to keep the name Free Church, though the majority was able to keep most of the financial resources. (See Free Church of Scotland (post 1900) for the history of the smaller body.)