Aftermath of the union of 1900

The protesting and dissenting minority at once claimed to be the legitimate Free Church. They met outside the Free Assembly Hall on October 31 and, failing to gain admission, withdrew to another hall, where they elected Colin A. Bannatyne as moderator and held the remaining sittings of their Assembly.

It was reported that between 16,000 and 17,000 names had been received of persons adhering to the anti-unionist principle. At the Assembly of 1901 it was stated that the Free Church had twenty-five ministers and at least sixty-three congregations, with most being found in the Gaelic-speaking districts of Scotland.

The initial problems were obvious: the congregations soon grew in number, but were far apart; there were not nearly enough ministers; the church was treated in a hostile manner by the United Free Church; work was conducted under considerable hardship; and there was little success in appealing to the general popular sentiment of Scotland. However, the revenue of the church gradually increased; in 1901, the sustentation fund was able to support only 75 ministers, but by 1903 it maintained 167.

After the union of 1900, the United Presbyterian Church and the continuing Free Church not only contested the legacy of the Free Church of 1843–1900, but also claimed its assets. After attempts at agreement failed, the matter ended in the Scottish courts. The litigation was initially decided in favour of the Free Church by the House of Lords in 1904, on the basis that in the absence of a power to change fundamental doctrines in the trust deed, a dissenting minority retains the property. As it was not possible for the Free Church to utilise all the property, Parliament intervened, generally securing for the church the congregational property she could effectively use plus a significant share of central assets.

The life of the church 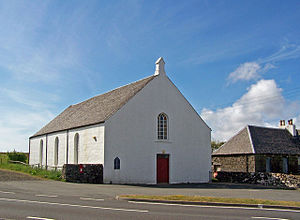 Free Church in Lonmore. The Free Church of Scotland has historically been known as "the church without the steeple."[7]

In 1906, a Free Church College was re-established in Edinburgh and by 1925 there were 91 ministers and 170 congregations in 12 presbyteries. The general magazine of the Free Church is The Monthly Record and there are magazines for young people. Two of the professors in the Free Church College began a theological journal the Evangelical Quarterly in 1929, but in 1942 control passed outside the church, initially to Inter Varsity Fellowship. Today the College offers degrees in conjunction with the University of Glasgow.

Post-1945, the Free Church engaged with the wider evangelical cause, but after its growth in the early decades, it began a statistical decline that, except for a short period in the 1980s, has continued. As of 2010, it has a community of about 12,000 including 4,425 communicants, and is evidencing a greater effort to bring the Gospel to bear upon an increasingly secular society.

The church maintains its strong commitment to the Westminster Confession and Reformed Theology. A complete psalter in modern English was published in 2003. Its offices and theological college remain on The Mound, Edinburgh, although the denomination no longer holds the original Free Church College buildings.

The Free Church continues to be evangelical in character, presenting its understanding of the Christian message, namely that Jesus Christ is sole Lord and Saviour. New churches continue to be planted, such as in Dunfermline and St Andrews and most recently Montrose in November 2015. There has been an increase in the numbers applying to the Free Church ministry, and studying in its Saturday course (provided by the Free Church College). 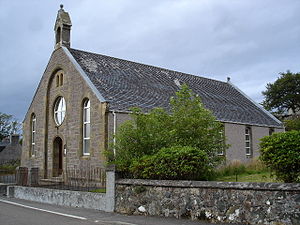 In the 1980s and 1990s there were allegations of sexual misconduct against Professor Donald Macleod, principal of the Free Church College. No misconduct was ever proven against Professor Macleod; he was tried and acquitted in 1996 in the civil courts. A faction hostile to Macleod pursued the charges in church courts, to no avail.

There was considerable dissatisfaction with the handling of the charges, and claims of a cover-up. Anti-Macleod minister Maurice Roberts of the Free Church Defence Association (FCDA) publicly reiterated the accusations, and denounced the General Assembly for its "wickedness and hypocrisy". He was suspended for contumacy. His supporters demanded his reinstatement and refused to disband the FCDA. In January 2000, 22 FCDA ministers were removed from their pulpits. These and other ministers formed the Free Church of Scotland (Continuing) (FCC); they are approximately 20% of the ministerial strength of the pre-2000 Free Church of Scotland. 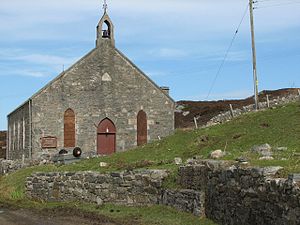 In November 2010, a special plenary assembly took place to debate and vote on allowing the singing of hymns and use of musical instruments in Free Church services. The motion was passed by a narrow margin.[22] A number of ministers insisted on recording their dissent over the decision. As of September 2011, three ministers (one retired) have resigned over the decision.[23] 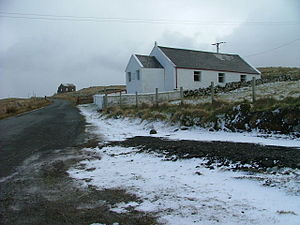 Free Church in Kilmaluag on Skye

Typically, Free Church services are at 11am and 6:30pm on Sunday Sabbath, or the Lord's Day. A typical order of service is:

Intimations may be read out before the first singing (in effect, before the actual service begins) or immediately after the reading, or before the benediction.

A 'first' reading may appear between the first singing and the first prayer. This reading will be of relevance to the 'main' reading.

Lay preachers will replace the benediction with a short prayer.

Since its inauguration until the events of 2010, only the psalms of the Old Testament (and in a very few instances, paraphrases of other parts of the Bible) would be sung during the services. Musical instruments were never used. Ostensibly, all but one of the psalms can now be replaced with hymns, and instruments can be used as an accompaniment.

There are over 100 congregations throughout Scotland, two in London and five in North America. The Church has maintained an extensive missionary commitment for its size, with missions in India, Peru and South Africa[24] which now have self-governing status.

Along with the Evangelical Presbyterian Church in England and Wales and the Free Church of Scotland (Continuing), the denomination is one of the three members of the International Conference of Reformed Churches from Great Britain,[25] and one of seven European Christian denominations who founded the European Conference of Reformed Churches.[26] There is a close relationship with the Presbyterian Church of Eastern Australia.