From Infogalactic: the planetary knowledge core
(Redirected from Free City of Bremen)
Jump to: navigation, search
This article is about the German state. For the similarly named German city, see Bremen.

The Free Hanseatic City of Bremen (German: Freie Hansestadt Bremen, pronounced [ˈbʁeːmən]) is the smallest of Germany's 16 states. A more informal name, but used in some official contexts, is Land Bremen ('State of Bremen').

The state consists of two cities (Bremen and Bremerhaven) in the North of Germany, separated from each other and surrounded by the larger state of Lower Saxony.

The state of Bremen consists of two separated enclaves: Bremen, officially the 'City' (Stadtgemeinde Bremen) which is the state capital, and the city of Bremerhaven (Stadt Bremerhaven). Both are located on the River Weser; Bremerhaven is further downstream and serves as a North Sea harbour (the name Bremerhaven means "Bremen's harbour"). Both cities are completely surrounded by the neighbouring State of Lower Saxony (Niedersachsen). The two cities are the only administrative subdivisions the state has. 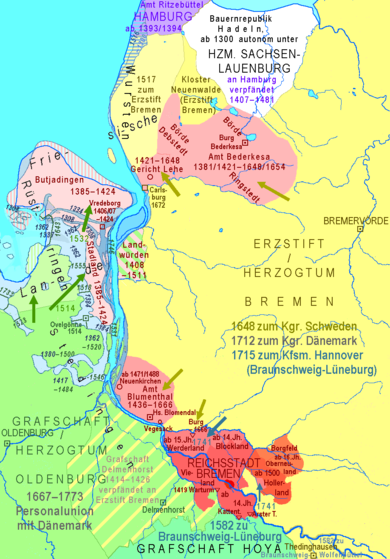 The territory of Bremen in 14th and 18th centuries 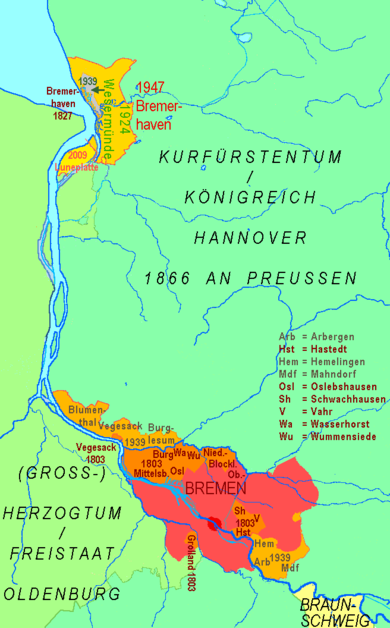 The territory of Bremen since 1800

At the unwinding of the Holy Roman Empire in 1806 the Free Imperial City of Bremen (as of 1646, after earlier privileges of autonomy of 1186) was not mediatised but became a sovereign state officially titled Free Hanseatic City of Bremen. Its currency was the Bremen thaler (until 1873). In 1811 the First French Empire annexed the city-state. Upon the first, albeit only preliminary, defeat of Napoléon Bonaparte, Bremen resumed its pre-1811 status as city-state in 1813.

The Vienna Congress of 1815 confirmed Bremen's—as well as Frankfurt's, Hamburg's, and Lübeck's—independence after pressuring by Bremen's emissary, and later burgomaster, Johann Smidt. Bremen became one of 39 sovereign states of the German Confederation. In 1827 the state of Bremen bought the tract of land from the Kingdom of Hanover, where future Bremerhaven would be established. Bremen became part of the North German Confederation in 1867 and became an autonomous component state of the new-founded German Empire in 1871 and stayed with Germany in its following forms of government.

Bremen, which in 1935 had become a regular city at the de facto abolition of statehood of all component German states within the Third Reich, was reestablished as a state in 1947. Being—at that time—actually located in the British Zone of Occupation the Control Commission for Germany - British Element and the Office of Military Government for Germany, U.S. (OMGUS) agreed in 1947 to constitute the cities of Bremen and then Wesermünde—in their borders altered in 1939—as a German state named again Free Hanseatic City of Bremen, becoming at that occasion an exclave of the American Zone of Occupation within the British zone.[3] In 1949 the city-state joined the then West German Federal Republic of Germany.

The legislature of the state of Bremen is the Bürgerschaft (citizens' assembly), elected by the citizens in the two cities of Bremen and Bremerhaven.

The executive is constituted by the Senate of Bremen, elected by the Bürgerschaft. The Senate is chaired by the President of the senate (Senatspräsident), who is also one of the mayors of the city of Bremen (Bürgermeister) and is elected directly by the Bürgerschaft. The Senate selects of its members as a second mayor who serves as deputy of the president. In contrast to the Federal Chancellor of Germany or other German states, the President of the Senate has no authority to override senators on policy, which is decided upon by the senate collectively. Since 1945, the Senate has continuously been dominated by the Social Democratic Party.

On a municipal level, the two cities in the state are administered separately: 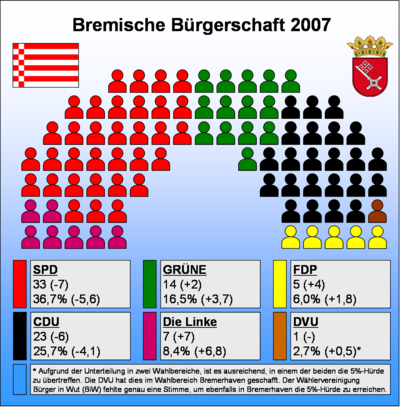 Seat results -- SPD in red, CDU in black, Greens in green, FDP in yellow, The Left in purple, DVU in brown. Note: The only DVU representative, Siegfried Tittmann, left the party in July 2007 and has not joined another party.

The coat of arms and flag of Bremen state include: