The Free Soil Party was a short-lived political party in the United States active in the 1848 and 1852 presidential elections, and in some state elections. Founded in Buffalo, New York, it was a third party and a single-issue party that largely appealed to and drew its greatest strength from New York State. The party leadership consisted of former anti-slavery members of the Whig Party and the Democratic Party. Its main purpose was opposing the expansion of slavery into the western territories, arguing that free men on free soil comprised a morally and economically superior system to slavery. They opposed slavery in the new territories (agreeing with the Wilmot Proviso) and sometimes worked to remove existing laws that discriminated against freed African Americans in states such as Ohio.

The party membership was largely absorbed by the Republican Party in 1854–1856, by way of the Anti-Nebraska movement. 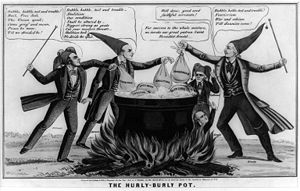 In this 1850 political cartoon, the artist attacks abolitionist, Free Soil, and other sectionalist interests of 1850 as dangers to the Union.

Free Soil candidates ran on the platform that declared: "...we inscribe on our banner, 'Free Soil, Free Speech, Free Labor and Free Men,' and under it we will fight on and fight ever, until a triumphant victory shall reward our exertions." The party also called for a homestead act and a tariff for revenue only. The Free Soil Party's main support came from areas of upstate New York, western Massachusetts, and Ohio, although other northern states also had representatives. The Free Soil Party contended that slavery undermined the dignity of labor and inhibited social mobility, and was therefore fundamentally undemocratic. Viewing slavery as an economically inefficient, obsolete institution, Free Soilers believed that slavery should be contained, and that if contained it would ultimately disappear.[citation needed] 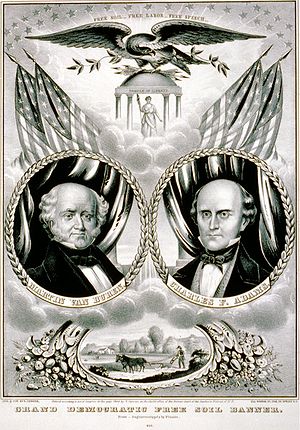 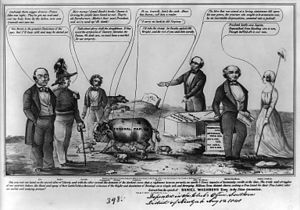 In 1848 the New York State Democratic convention did not endorse the Wilmot Proviso, an act that would have banned slavery in any territory conquered by the United States in the Mexican War. Almost half the members, known as "Barnburners," walked out after denouncing the national platform. Lewis Cass, the Democratic Party's 1848 presidential nominee, supported popular sovereignty for determining the status of slavery in the U.S. territories. This stance repulsed the New York State Democrats and encouraged them to join with anti-slavery Whigs and the majority of the Liberty Party to form the Free Soil Party, which was formalized in the summer of 1848 at conventions in Utica and Buffalo, New York. There the Free Soilers nominated former Democratic President Martin Van Buren for president, along with Charles Francis Adams for vice president, at Lafayette Square, then known as Court House Park.[1] The main party leaders were Salmon P. Chase of Ohio and John P. Hale of New Hampshire. The Free Soil candidates won 10% of the popular vote, but no electoral votes, in part because their nomination of Van Buren discouraged many anti-slavery Whigs from supporting the Free Soil Party.

The party distanced itself from abolitionism and avoided the moral problems implicit in slavery. Members emphasized instead the threat slavery would pose to free white labor and northern businessmen in the new western territories. Although abolitionist William Lloyd Garrison derided the party philosophy as "white manism,"[2] the approach appealed to many moderate opponents of slavery. The 1848 platform pledged to promote limited internal improvements, work for a homestead law, paying off the public debt, and a moderate tariff for revenue only.

The Compromise of 1850 temporarily neutralized the issue of slavery and undercut the party's no-compromise position. Most Barnburners returned to the Democratic party, and the Free Soil Party became dominated by ardent anti-slavery leaders.

The party ran John P. Hale in the 1852 presidential election, but its share of the popular vote shrank to less than 5%. However, two years later, after enormous outrage over the Kansas-Nebraska Act of 1854, the remains of the Free Soil Party helped form the Republican Party.[3]

The Free Soil Party sent two Senators and fourteen Representatives to the thirty-first Congress, which convened from March 4, 1849 to March 3, 1851. Since there were party members on the floor of Congress, they could carry more weight in the government and the debates that were pressing. Its presidential nominee in 1848, Martin Van Buren, received 291,616 votes against Zachary Taylor of the Whigs and Lewis Cass of the Democrats, but Van Buren received no electoral votes. The Party's "spoiler effect" in 1848 may have put Zachary Taylor into office in a narrowly contested election.

The strength of the party, however, was its representation in Congress. The sixteen elected officials' influence far exceeded its numbers.[citation needed] The party's most important legacy was as a route for anti-slavery Democrats to join the new Republican coalition.

In Ottawa, Illinois, in August 1854, an alliance was brokered between the Free Soil Party and the Whigs (in part based on the efforts of local newspaper publisher Jonathan F. Linton) that gave rise to the Republican Party.[4]