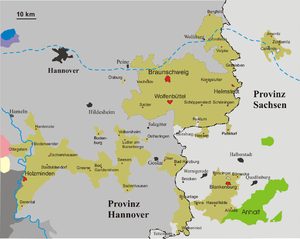 The Duchy of Brunswick had been established after the 1814 Congress of Vienna, as a sovereign successor state of the German Confederation.[1] It roughly comprised the incoherent territory of the former Principality of Brunswick-Wolfenbüttel, stretching from Holzminden on the Weser River in the west to Blankenburg in the Harz mountain range and Calvörde in the east.[2]

The Brunswick territory was largely surrounded by the Prussian provinces of Hanover (the former Kingdom of Hanover) and Saxony.[2] From 1913 it was ruled by Duke Ernest Augustus of the House of Hanover.[3]

The reports on the Kiel mutiny of 3 November 1918 sparked unrest in Braunschweig, when local revolutionaries led by the Independent Social Democratic Party of Germany (USPD) stormed the local prison, occupied the railway station and the police headquarters, and also attacked Brunswick Palace. On November 8, Duke Ernest Augustus of Brunswick was forced to resign and went into exile.[4][5] Two days later, a worker's council proclaimed the "Socialist Republic of Brunswick", ruled by a council of USPD revolutionaries.

However, their intentions to implement a Soviet republic failed, as in the first parliamentary elections on 22 December 1918 the USPD officials were outnumbered by the Social Democrats (SPD), who reached 27.7% of the votes cast.[6] On 22 February 1919, both parties formed a coalition government led by the USPD politician Joseph ("Sepp") Oerter,[7] that shifted the state's constitution towards a parliamentary republic. However, the government had to deal with subsequent uprisings in the capital Braunschweig, led by the Communist Spartacus League, which on 9 April called a general strike. Four days later, the Reich government declared the state of emergency in Brunswick and crushed the Spartacist revolt with the aid of invading Freikorps troops under Georg Ludwig Rudolf Maercker.[8][9] 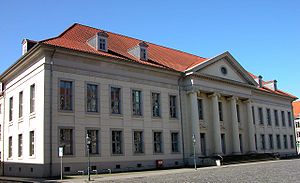 Jasper's government stabilized public policy, however, in the 1920 state election the SPD suffered a heavy loss of votes and the succeeding coalition government was again led by his USPD rival Sepp Oerter. The Brunswick free state constitution was adopted on 6 January 1922.

In the 1922 elections, the SPD/USPD government finally lost its majority, wherafter the Social Democrats under Heinrich Jasper formed a coalition with the DDP and the national liberal German People's Party (DVP). At the same time, the rising Nazi Party (NSDAP) established first local branches in Braunschweig and Wolfenbüttel, until it was banned by the state government on 13 September 1923. Nevertheless, the party was represented in the Brunswick Landtag, when Sepp Oerter switched from left to right and joined the NSDAP in 1924.

After the 1924 elections, the DVP led a right-wing coalition government of several national liberal and conservative parties, among them the National Socialist Freedom Movement (NSFB), a substitute of the outlawed Nazi Party. The Social Democrats under Heinrich Jasper once again were able to form a government upon the 1927 elections, however, it lost its majority in the following elections of 1930. The NSDAP reached 22.9% of the votes cast, whereafter the Nazi politician Anton Franzen joined the new right-wing government as Minister of the Interior,[10] succeeded by his party fellow Dietrich Klagges on 15 September 1931. 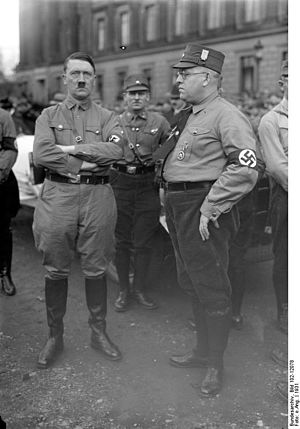 Hitler in Braunschweig (with Minister Franzen), 1931

Klagges was instrumental for the dismissal of opposition public servants and in organizing the anti-democratic Harzburg Front in October 1931. He is especially known for naturalizing the former Austrian citizen Adolf Hitler, who had now been stateless for seven years and aimed to run for the 1932 German presidential election.[11] After a first attempt to obtain a tenure at the Braunschweig University of Technology had shamefully failed, Minister Klagges in 1932 finally reached the appointment of Hitler as a public functionary at the Brunswick delegation to the Reichsrat in Berlin, which earned him to be a citizen of Brunswick, thus automatically of Germany.[12] Any activity of Hitler in his (high-paid) office is not recorded. After his appointment as Reich Chancellor on 30 January 1933, he was officially dismissed.

Before and after the Nazi Machtergreifung, Communist and SPD politicians were persecuted and arrested in Brunswick.[13] The composition of the Landtag legislature was re-arranged according to the results of the German federal election of 5 March 1933 and, after the national conservative DNVP deputies had joined the Nazi Party, it constituted as a single-party parliament. Klagges was elected Minister-president of Brunswick on 6 May, together with his party fellows Justice Minister Friedrich Alpers and Chief of Police Friedrich Jeckeln he established a terror regime. He nevertheless had to accept the superior power of Reichsstatthalter Wilhelm Friedrich Loeper, whose office was established in the course of the Nazi Gleichschaltung process. The last Landtag session was held on 13 June 1933, the legislature was finally dissolved on 14 October.

On 12 April 1945, US forces took the city of Brunswick and deposed the Nazi government. The Brunswick territory became part of the British occupation zone, with the exception of the eastern Blankenburg and Calvörde areas, which fell to Soviet-administered Saxony-Anhalt. On 7 May 1946, the British authorities appointed the Social Democratic politician Alfred Kubel minister-president, the last before the Brunswick territory within the British zone on 23 November merged with the State of Hanover (the former Prussian province), the Free States of Oldenburg and Schaumburg-Lippe into the newly founded state (Land) of Lower Saxony.[14]

The Brunswick region remained a Lower Saxon Verwaltungsbezirk (from 1978: Regierungsbezirk) until its dissolution in 2004. The Brunswick state constitution of 1922 was not repealed until a 2011 resolution by the Landtag of Lower Saxony.

Chairmen of the Council of People's Commissioners, 1918–1919

Reichsstatthalter for Anhalt and Brunswick (headquarters in Dessau) 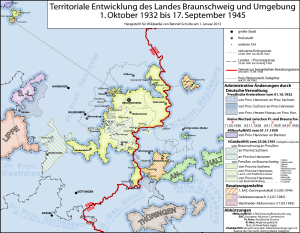 The Free State of Brunswick initially comprised the City of Braunschweig and the following rural districts:

On 1 April 1942 the city district of Watenstedt-Salzgitter was established on Goslar and Wolfenbüttel territory.