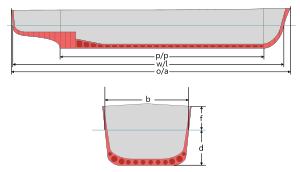 A graphical representation of the dimensions used to describe a ship. f is the free board.
For other uses, see freeboard.

In sailing and boating, a vessel's freeboard[1] is the distance from the waterline to the upper deck level, measured at the lowest point of sheer where water can enter the boat or ship. In commercial vessels, the latter criterion measured relative to the ship's load line, regardless of deck arrangements, is the mandated and regulated meaning.[2]

In yachts, a low free board is often found on racing boats, for weight reduction and therefore increased speed. A higher free board will give more room in the cabin, but will increase weight and may compromise speed. A higher free board also helps weather waves and reduce the likelihood of being washed over by full water waves on the weather deck. A low free board boat is susceptible to taking in water in rough seas. Freighter ships and warships use high-free board designs to increase internal volume, which also allows them to satisfy IMO damage stability regulations due to increased reserved buoyancy.