From Infogalactic: the planetary knowledge core
(Redirected from Freightliner UK)
Jump to: navigation, search
This article is about the rail company. For other uses, see Freightliner (disambiguation). 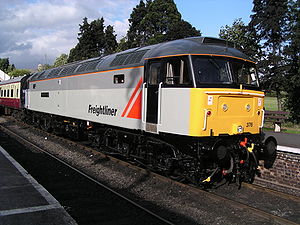 47376 in original Freightliner livery. This locomotive was used to launch the company in 1995, being named Freightliner 1995. It is now preserved on the Gloucestershire Warwickshire Railway and is seen at Toddington on 25 September 2005

The origins of the Freightliner concept go back to the mid-1960s when as part of its modernisation and rationalisation programme, British Rail began moving freight using shipping containers on flat wagons between a series of dedicated inland terminals, using gantry cranes for transshipment between road and rail.[5]

Freightliner's first single-shipper train was operated on 20 August 1968, hauling specially-designed 30-foot containers carrying parts for Ford Escort cars that were destined for assembly in plants on the European mainland.[6] Although initially intended for domestic freight, this was soon overtaken by freight between deep-sea ports, such as Southampton Maritime and inland distribution terminals associated with centres of manufacturing or population, such as Birmingham Lawley Street.

Dudley Freightliner Terminal, 10 miles (16 km) from Birmingham, on the site of the old railway station was opened in October 1967. This proved to be one of the most profitable such terminals in the country, while the Birmingham terminal was ultimately one of the least financially viable. Yet by 1981, Freightliner was planning to close Dudley and transfer its function to Birmingham in order to boost the latter's fortunes. However, the Dudley terminal was given a reprieve in 1983, only for closure plans to re-emerge in 1986. It finally closed in 1989.[7]

As part of the Privatisation of British Rail the Freightliner business unit had its assets transferred into a new company, Freightliner (1995) Limited, in preparation for sale.[8] On 25 May 1996 Freightliner was purchased by a management buyout backed by 3i and Electra Private Equity.[9]

On 13 June 2008 Freightliner Group was purchased by Railinvest Holding Company Limited[10] a subsidiary of Arcapita Bank of Bahrain.[11][12]

On 12 November British Rail Class 47 No. 47830 (D1645), which is operated by Freightliner, was named Beeching's Legacy to mark 50 years since the first container train ran under British Rail.[14]

Freightliner Group has the following subsidiaries:[15]

When Freightliner was privatised in 1996, it only operated Intermodal container services. These ran from ports including Felixstowe, Southampton and Tilbury to terminals such as Birmingham, Trafford Park in Manchester, Ashton Gate in Bristol, and Wentlooge Newport South Wales. The network has been expanded with additional destinations added.[16] Freightliner also operate an extensive road distribution network with 300 road vehicles.

In April 2006 Freightliner Maintenance Limited was established as a separate entity dedicated to the repair and maintenance of traction and rolling stock.[18] 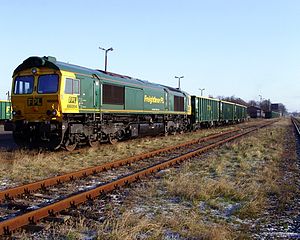 Freightliner PL 66004 awaits its next duty at the railway station in Złotów, Poland on 30 September 2008

In 2006 Freightliner expanded its operations into Poland. A subsidiary company, Freightliner PL Sp. z o.o., was established to bid for contracts hauling coal traffic.[19] The first contract was for coal transport from Lubelski Węgiel Bogdanka SA near Bogdanka (Bogdanka-Lublin coal mine) to Kozienice Power Station. The service began in September 2007.[20][21] Most of Freightliner PL's services operate on the Gdańsk to Warsaw corridor and in southern Poland.

In 1997 Freightliner placed an order for six Class 57 locomotives. These were rebuilt by Brush Traction at Loughborough from Class 47s fitted with a refurbished EMD engine and a reconditioned alternator, improving reliability and performance. The first was delivered in July 1998. After an evaluation period Freightliner was sufficiently impressed to order a further six in June 1999.[28]

Various orders were placed for Class 66s with 111 eventually delivered. These replaced all of the Class 47s by 2004 and the Class 57s by 2008. Freightliner also leased some Class 66s formerly operated by Direct Rail Services.

In November 2007 Freightliner announced an order for 30 Class 70s under a project called Project Genesis.[29] The first two were delivered in November 2009. These have released a number of Class 66s with five going to Colas Rail, 13 to Freightliner Poland and four to GB Railfreight.[30]

Freightliner PL ordered seven EMD Class 66s & 432 Greenbrier coal hopper wagons. These have been supplemented by an EMD Class 66 formerly used by Häfen und Güterverkehr Köln and 12 Class 66s transferred from Freightliner's UK operations. A 13th was sent from the UK in October 2012. These units underwent various modifications to allow them to operate on the Polish network.[31]

Freightliner Australia commenced operations using hired in GL class locomotives from Chicago Freight Car Leasing Australia. After a longer term lease was agreed, two were repainted into Freightliner livery in September 2010.[32] The Warren service that commenced in May 2012 also uses locomotives hired from CFCLA. The Xstrata coal contract is operated by XRN class locomotives that are owned by the customer.[33][34] Wagon types are PHEH and PHYH for the coal traffic and CQBY, CQFY and CQYY on the grain traffic.[35]