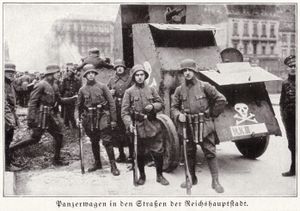 Freikorps (pronounced [ˈfʀaɪ̯ˌkoːɐ̯], "Free Corps") were German volunteer units that existed from the 18th to the early 20th centuries, the members of which effectively fought as mercenaries, regardless of their own nationality. In German-speaking countries the first so-called Freikorps "free regiments" (German: Freie Regimenter) were formed in the 18th century from native volunteers, enemy renegades and deserters, and criminals. These sometimes exotically equipped units served as infantry and cavalry or, more rarely, as artillery. Sometimes in just company strength, sometimes in formations up to several thousand strong, there were also various mixed formations or legions. The Prussian von Kleist Freikorps included infantry, jäger, dragoons, and hussars. The French Volontaires de Saxe combined uhlans and dragoons.

In the aftermath of World War I and the German Revolution of 1918–19, Freikorps were raised as right-wing paramilitary militias to fight against the left wing in the newly formed Weimar Republic. "They engaged in bloody confrontations with republican loyalists and engineered some of the more notorious assassinations" of the Weimar period, and are widely seen as a "precursor to Nazism".[1] An entire series of Freikorps awards also existed. 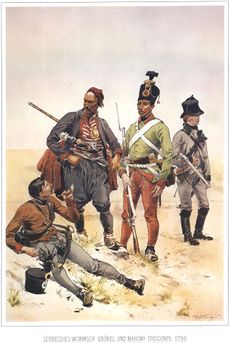 The very first Freikorps were recruited by Frederick the Great during the Seven Years' War. On 15 July 1759, Frederick ordered the creation of a squadron of volunteer hussars to be attached to the 1st Regiment of Hussars (von Kleist's Own). He entrusted the creation and command of this new unit to Colonel Friedrich Wilhelm von Kleist. This first squadron (80 men) was raised in Dresden and consisted mainly of Hungarian deserters. This squadron was placed under the command of Lieutenant Johann Michael von Kovacs. At the end of 1759, the first 4 squadrons of dragoons (a.k.a. horse-grenadiers) of the Freikorps were organised. They initially consisted of Prussian volunteers from Berlin, Magdeburg, Mecklenburg and Leipzig but later recruited deserters. The Freikorps were regarded as unreliable by regular armies, so they were mainly used as sentries and for minor duties.

These early Freikorps appeared during the War of the Austrian Succession and especially the Seven Years' War, when France, Prussia and the Habsburg Monarchy embarked on an escalation of petty warfare while conserving their regular regiments. Even during the last Kabinettskrieg, the War of the Bavarian Succession, Freikorp formations were formed in 1778. Germans, Hungarians, Poles, Lithuanians and South Slavs, as well as Turks, Tatars and Cossacks, were believed by all warring parties to be inherently good fighters. The nationality of many soldiers can no longer be ascertained with certainty as the ethnic origin was often described imprecisely in the regimental lists. Slavs (Serbs, Croats) were often referred to as "Hungarians" or "Croats", and Muslim recruits (Albanians, Bosnians, Tatars) as "Turks".

For Prussia, the Pandurs, who were made up of Serbs and Croats, were a clear model for the organization of such "free" troops. Frederick the Great created 14 "free infantry" (Frei-Infanterie) units, mainly between 1756 and 1758, which were intended to be attractive to those soldiers who wanted military "adventure", but did not want to have to do military drill. A distinction should be made between the Freikorps formed up to 1759 for the final years of the war, which operated independently and disrupted the enemy with surprise attacks and the free infantry which consisted of various military branches (such as infantry, hussars, dragoons, jäger) and were used in combination. They were often used to ward off Maria Theresa's Pandurs. In the era of linear tactics, light troops had been seen necessary for outpost, reinforcement and reconnaissance duties. During the war, eight such volunteer corps were set up:

Because, with some exceptions, they were seen as undisciplined and less battleworthy, they were used for less onerous guard and garrison duties. In the so-called "petty wars", the Freikorps interdicted enemy supply lines with guerrilla warfare. In the case of capture, their members were at risk of being executed as irregular fighters. In Prussia the Freikorps, which Frederick the Great had despised as "vermin", were disbanded. Their soldiers were given no entitlement to pensions or invalidity payments.

In France, many corps continued to exist until 1776. They were attached to regular dragoon regiments as jäger squadrons. During the Napoleonic Wars, Austria recruited various Freikorps of Slavic origin. The Slavonic Wurmser Freikorps fought in Alsace. The combat effectiveness of the six Viennese Freikorps (37,000 infantrymen and cavalrymen), however, was low. An exception were the border regiments of Croats and Serbs who served permanently on the Austro-Ottoman border. 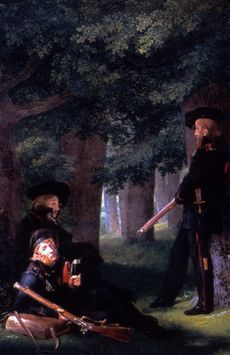 Freikorps in the modern sense emerged in Germany during the course of the Napoleonic Wars. They fought not so much for money but rather out of patriotic motives, seeking to shake off the French Confederation of the Rhine. After the French under Emperor Napoleon had either conquered the German states or forced them to collaborate, remnants of the defeated armies continued to fight on in this fashion. Famous formations included the King's German Legion, who had fought for Britain in French-occupied Spain and were mainly recruited from Hanoverians, the Lützow Free Corps and the Black Brunswickers.

The Freikorps attracted many nationally disposed citizens and students. Freikorps commanders such as Ferdinand von Schill, Ludwig Adolf Wilhelm von Lützow or Frederick William, Duke of Brunswick-Wolfenbüttel, known as the "Black Duke", led their own attacks on Napoleonic occupation forces in Germany. Those led by Schill were decimated in the Battle of Stralsund (1809); many were killed in battle or executed at Napoleon's command in the aftermath. The Freikorps were very popular during the period of the German War of Liberation (1813–15), during which von Lützow, a survivor of Schill's Freikorps, formed his Lützow Free Corps. The anti-Napoleonic Freikorps often operated behind French lines as a kind of commando or guerrilla force.

Throughout the 19th century, these anti-Napoleonic Freikorps were greatly praised and glorified by German nationalists, and a heroic myth built up around their exploits. This myth was invoked, in considerably different circumstances, in the aftermath of Germany's defeat in World War I.

Even in the aftermath of the Napoleonic era, Freikorps were set up with varying degrees of success.

During the March 1848 riots, student Freikorps were set up in Munich.

In First Schleswig War of 1848 the Freikorps of von der Tann, Zastrow and others distinguished themselves.

In 1864 in Mexico, the French formed the so-called Contreguerrillas under former Prussian hussar officer, Milson. In Italy Garibaldi formed his famous Freischars, notably the "Thousand of Marsala", which landed in Sicily in 1860.

Even before the Franco-Prussian War of 1870/71, Freikorps were developed in France that were known as franc-tireurs.

The meaning of the word Freikorps changed over time. After 1918, the term was used for the paramilitary organizations that sprang up around Germany as soldiers returned in defeat from World War I. They were the key Weimar paramilitary groups active during that time. Many German veterans felt disconnected from civilian life, and joined a Freikorps in search of stability within a military structure. Others, angry at their sudden, apparently inexplicable defeat, joined up in an effort to put down communist uprisings, such as the Spartacist uprising, or exact some form of revenge on those they considered responsible for the armistice. They received considerable support from Minister of Defense Gustav Noske, a member of the Social Democratic Party of Germany. Noske used them to crush the German Revolution of 1918–19 and the Marxist Spartacist League, including arresting Karl Liebknecht and Rosa Luxemburg, who were killed on 15 January 1919. They were also used to defeat the Bavarian Soviet Republic in May 1919.[3]

On 5 May 1919, members of Freikorps Lützow in Perlach near Munich, acted on a tip from a local cleric and arrested and killed twelve alleged communist workers (most of them actually members of the Social Democratic Party). A memorial on Pfanzeltplatz in Munich today commemorates the incident.[4][5][6] 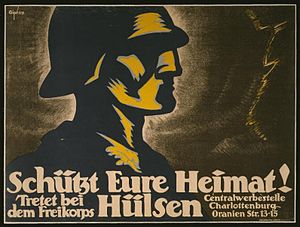 A recruitment poster for the Freikorps Hülsen

Freikorps also fought against the communists in the Baltics, Silesia, Poland and East Prussia after the end of World War I, including aviation combat, often with significant success. Anti-Slavic racism was sometimes present, although the ethnic cleansing ideology and anti-Semitism that would be expressed in later years had not yet developed.[7] In the Baltics they fought against communists as well as against the newborn independent democratic countries Estonia and Latvia. In Latvia, Freikorps murdered 300 civilians in Mitau who were suspected of having "Bolshevik sympathies". After the capture of Riga, another 3000 alleged communists were killed,[8] including summary executions of 50–60 prisoners daily.[9] Though officially disbanded in 1920, some of them continued to exist for several years[10] and many Freikorps' attempted, unsuccessfully, to overthrow the government in the Kapp Putsch in March 1920.[11] Their attack was halted when German citizens loyal to the government went on strike, cutting off many services and making daily life so problematic that the coup was called off.

In 1920, Adolf Hitler had just begun his political career as the leader of the tiny and as-yet-unknown Deutsche Arbeiterpartei/DAP German Workers' Party, which was soon renamed the Nationalsozialistische Deutsche Arbeiterpartei/NSDAP (National Socialist German Workers Party) or Nazi Party in Munich. Numerous future members and leaders of the Nazi Party had served in the Freikorps, including Ernst Röhm, future head of the Sturmabteilung, or SA, Heinrich Himmler, future head of the Schutzstaffel, or SS, and Rudolf Höß, the future Kommandant of the Auschwitz concentration camp. Hermann Ehrhardt, founder and leader of Marinebrigade Ehrhardt, and his deputy Commander Eberhard Kautter, leaders of the Viking League, refused to help Hitler and Erich Ludendorff in their Beer Hall Putsch and conspired against them.

Hitler eventually viewed some of them as threats. A huge ceremony was arranged on 9 November 1933 in which the Freikorps leaders symbolically presented their old battle flags to Hitler's SA and SS. It was a sign of allegiance to their new authority, the Nazi state.[12] When Hitler's internal purge of the party, the Night of the Long Knives, came in 1934, a large number of Freikorps leaders were targeted for killing or arrest, including Ehrhardt and Röhm. Historian Robert GL Waite claims that in Hitler's "Röhm Purge" speech to the Reichstag on 13 July 1934, he implied that the Freikorps were one of the groups of "pathological enemies of the state".[13] 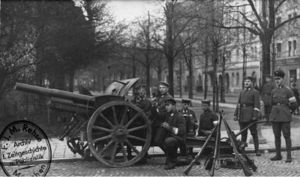 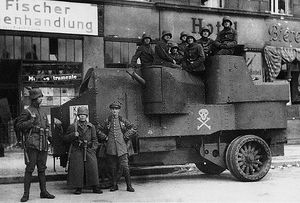 Freikorps soldiers pictured during the Kapp Putsch of 1920 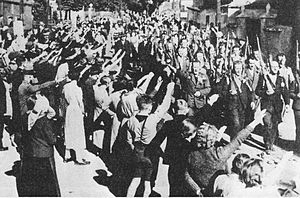