In the 18th century, there was significant debate in the scientific community, specifically in the French Academy of Sciences (Académie des sciences), as to whether the circumference of the Earth was greater around the Equator or around the poles. French astronomer Jacques Cassini held to the view that the polar circumference was greater. Louis XV, the King of France and the Academy sent two expeditions to determine the answer: one was sent to Lapland, close to the North Pole, under Swedish physicist Anders Celsius and French mathematician Pierre Maupertuis. The other mission was sent to Ecuador, at the Equator. Previous accurate measurements had been taken in Paris by Cassini and others. 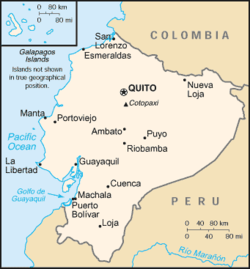 The equatorial mission was led by French astronomers Charles Marie de La Condamine, Pierre Bouguer, Louis Godin and Spanish geographers Jorge Juan and Antonio de Ulloa. They were accompanied by several assistants, including the naturalist Joseph de Jussieu and Louis's cousin Jean Godin. La Condamine was joined in his journey down the Amazon by Ecuadoran geographer and topographer Pedro Maldonado. (Maldonado later traveled to Europe to continue his scientific work.)

The Ecuadoran expedition left France in May 1735. They landed on the Caribbean coast in Colombia, sailed to Panama where they traveled overland to the Pacific, and continued by sail to Ecuador, then called the Territory of Quito by Spain.[N 1] In Ecuador, they split into two groups, traveling overland through rain forests, arriving in Quito in June 1736.

Bouguer, La Condamine, Godin and their colleagues measured arcs of the Earth’s curvature on the Equator from the plains near Quito to the southern city of Cuenca. These measurements enabled the first accurate determination of the size of the Earth, eventually leading to the establishment of the international metric system of measurement.

They completed their survey measurements by 1739, measuring the length of a meridian arc of three degrees at the Equator. They did this in spite of earlier news that the expedition to Lapland led by Maupertuis had already finished their work and had proven that the Earth is oblate, i.e., flattened at the poles. However, problems with astronomical observations kept them in Ecuador several more years.

Bouguer returned first from the expedition, going overland to the Caribbean and then to France. La Condamine, along with Maldonado, returned by way of the Amazon River. Godin took a position as professor in Lima, where he helped rebuild the city after the devastating 1746 earthquake, and returned to Europe in 1751. Bouguer, La Condamine and the Spanish officers each wrote separate accounts of the expedition, which opened up European eyes to the exotic landscapes, flora and fauna of South America, and led directly to the great naturalist expeditions by Alexander von Humboldt and others.

Observations during the mission

Expedition members first came across rubber tapping (and thus rubber), the identification of the correct types of cinchona tree that produce the active form of quinine (anti-malarial agent) and the development of what became the metric system for units of measure.

In the late 19th century, the Academy of Sciences sent another mission to Ecuador at the behest of the International Association of Geodesy to confirm the results of the First Geodesic Mission and commemorate the relationship between the two republics. This second mission was led by Captain E. Maurain and several other military personnel during its tenure in Ecuador from 1901–1906. The only two members of the French mission to spend the entire time in Ecuador were Lieutenant (later General) Georges Perrier and medical officer Paul Rivet, later an important anthropologist and founder of the Musée de l'Homme in Paris.

A reproduction of the pyramids that marked the baseline for measurement at Yaruqui (which was destroyed by Quito authorities in the 1740s) was erected in 1836, the centennial of the expedition, by the Rocafuerte administration of the nascent republic of Ecuador. This monument fell into disrepair over the next century but was rebuilt in 1936, minus its original French inscription, for the bicentennial of the first geodesic expedition, along with a second pyramid at San Antonio de Pichincha on the Equator. These monuments still exist today. The new Quito international airport opened in the Yaruqui valley. Though talks of having a mural celebrating the Geodesic Mission took place during planning stages, no acknowledgement of the scientific importance of this site currently exists.

In 1936, the French American Committee of Ecuador sponsored the idea of the Ecuadoran geographer Dr. Luis Tufiño and raised a monument commemorating the bicentennial of the arrival of the First Geodesic Mission. They raised a 10-meter-high monument at Ciudad Mitad del Mundo in San Antonio de Pichincha, in Pichincha Province of Ecuador. However, there is no record that the Mission ever visited the area. Moreover, the monument bears a suspicious resemblance to a fictitious pyramid in Frederic Edwin Church's painting "Cayambe" rather than to any actual Ecuadorian site.

There is a project to build a new pyramid exactly on the Equator, to be designed by famed architect Rafael Viñoly.