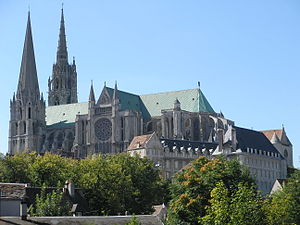 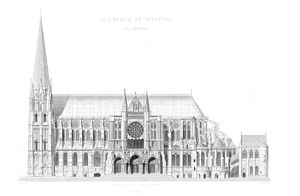 South elevation of the Cathedral of Notre-Dame de Chartres

The designations of styles in French Gothic architecture are as follows:

These divisions are effective, but still set grounds for debate. Because the lengthy construction of Gothic cathedrals could span multiple architectural periods, and builders in each period did not always follow wishes of previous periods, dominant architectural style often changes throughout a particular building. Consequently, it is often difficult to declare one building as a member of a certain era of Gothic architecture. It is more useful to use the terms to describe specific elements within a structure, rather than applying them to the building as a whole. 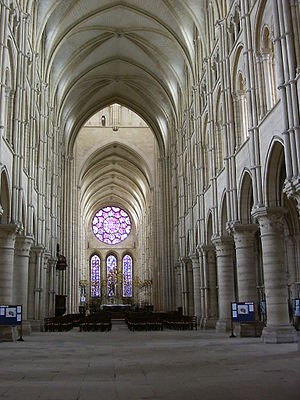 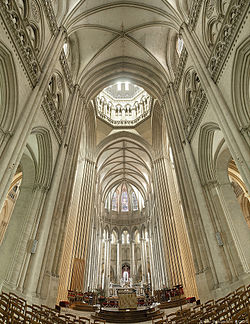 This style began in 1140 and was characterized by the adoption of the pointed arch and transition from late Romanesque architecture. To heighten the wall, builders divided it into four tiers: arcade (arches and piers), gallery, triforium, and clerestorey. To support the higher wall builders invented the flying buttresses, which reached maturity only at High Gothic during the 13th century. The vaults were six ribbed sexpartite vaults.

This 13th-century style canonized proportions and shapes from early Gothic and developed them further to achieve light, yet tall and majestic structures. The wall elevation was modified from four to only three tiers: arcade, triforium, and clerestory. Piers coronations were smaller to avoid stopping the visual upward thrust. The clerestorey windows changed from one window in each segment, holed in the wall, to two windows united by a small rose window. The rib vault changed from six to four ribs. The flying buttresses matured, and after they were embraced at Notre-Dame de Paris and Notre-Dame de Chartres, they became the canonical way to support high walls, as they served both structural and ornamental purposes.

The portal sculpture of Burgundy integrates Classical, literary elements with its 13th century Gothic style. In Auxerre, two such examples of sculptures are upon the Cathedral of Saint-Etienne depicting Hercules, a satyr, and a sleeping faun; the Chartres-Rheims cathedral's north transept illustrates the biblical tale of David and Bathsheba. The Sens Cathedral's "Coronation of the Virgin" reflects a similar relief cathedral on the Notre Dame in Paris, and was created in a workshop that made minor contributions to Spanish Gothic architecture[1]

In addition to these Gothic styles, there is another style called "Gothique Méridional" (or Southern Gothic, opposed to Gothique Septentrional or Northern Gothic). This style is characterized by a large nave and has no transept. Examples of this Gothic architecture would be: 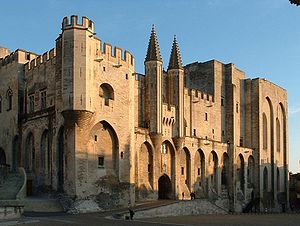 The façade of the Palais des Papes

Many examples of secular structures in Gothic style survive in fairly original condition. The Palais des Papes in Avignon is the best complete large royal palace and parts of the famous Conciergerie, former palace of the kings of France in Paris. The house of the wealthy early 15th-century merchant Jacques Coeur in Bourges, is the classic Gothic bourgeois mansion, full of the asymmetry and complicated detail beloved of the Gothic Revival.[2] The living and working parts of many monastic buildings survive, for example at Mont Saint-Michel.