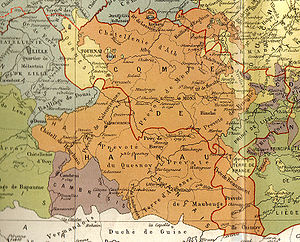 Map of the County of Hainaut, with in red the current French-Belgian border. French Hainaut is the southern part

Until the 17th century it was an integral part of the County of Hainaut, ruled by the Burgundians and later the Habsburgs. However, in a series of wars between France and Spain, the southern part of Hainaut was conquered by France, as were French Flanders and the Bishopric of Cambrai. Together with the former Bishopric of Cambrai, it formed the French province of Flandre before the French Revolution.