From Infogalactic: the planetary knowledge core
(Redirected from French Senate)
Jump to: navigation, search
Not to be confused with the Sénat conservateur of the French Consulate and First French Empire.

The Senate (French: Sénat [seˈna]) is the upper house of the Parliament of France, presided over by a president. Indirectly elected by elected officials, it represents territorial collectivities of the Republic and French citizens living abroad.

The Senate enjoys less prominence than the lower house, the directly elected National Assembly; debates in the Senate tend to be less tense and generally receive less media coverage.

France's first experience with an upper house was under the Directory from 1795 to 1799, when the Council of Ancients was the upper chamber. There were Senates in both the First and Second Empires (the former being known as the sénat conservateur, the latter as the French Senate), but these were only nominally legislative bodies – technically they were not legislative, but rather advisory bodies on the model of the Roman Senate.

With the Restoration in 1814, a new Chamber of Peers was created, on the model of the British House of Lords. At first it contained hereditary peers, but following the July Revolution of 1830, it became a body to which one was appointed for life. The Second Republic returned to a unicameral system after 1848, but soon after the establishment of the Second French Empire in 1852, a Senate was established as the upper chamber. In the Fourth Republic, the Senate was replaced by the Council of the Republic, but its function was largely the same. With the new constitution of the Fifth Republic enforced on 4 October 1958, the older name of Senate was restored.

In 2011, the Socialist Party won control of the French Senate for the first time since the foundation of the French Fifth Republic.[2]

Until September 2004, the Senate had 321 senators, each elected to a nine-year term. That month, the term was reduced to six years, while the number of senators progressively increased to 348 in 2011, in order to reflect the country's population growth.[3] Senators were elected in thirds every three years; this was also changed to one-half of their number every three years.[4]

Senators are elected indirectly by approximately 150,000 officials ("grands électeurs"), including regional councilors, department councilors, mayors, city councilors in large towns, and members of the National Assembly. However, 90% of the electors are delegates appointed by councilors. This system introduces a bias in the composition of the Senate favoring rural areas. As a consequence, while the political majority changes frequently in the National Assembly, the Senate has remained politically right since the foundation of the Fifth Republic, much to the displeasure of the Socialists.[5] This has spurred controversy, especially after the September 2008 senatorial elections[6] in which the (left-wing) Socialist Party, despite controlling all but two of France's regions, a majority of départements, and communes representing more than 50% of the population, still failed to achieve a majority in the Senate. The Senate has also been accused of being a "refuge" for politicians that have lost their seats in the National Assembly. However, the left (led by PS) gained control of the French Senate for the first time since 1958 in 2011, a short lived win as in 2014, the right (led by UMP) regained the French Senate due to the dipping popularity of President Francois Hollande, incumbent since 2012.

Twelve senators are elected to represent French citizens living outside the Republic.[7]

The senators elect a President from among their members. The current incumbent is Gérard Larcher. The President of the Senate is, under the constitution of the Fifth Republic, first in the line of succession—in case of death, resignation or removal from office (only for health reasons)—to the Presidency of the Republic, becoming Acting President of the Republic until a new election can be held. This happened twice for Alain Poher—once at the resignation of Charles de Gaulle and once at the death of Georges Pompidou.

The Senate also serves to monitor the administration's actions by publishing many reports each year on various topics. 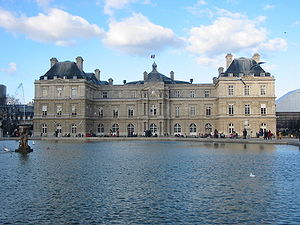 The Senate is housed inside the Luxembourg Palace in the 6th arrondissement of Paris, and is guarded by Republican Guards. In front of the building lies the Senate's garden, the Jardin du Luxembourg, open to the public.