French language in the United States

From Infogalactic: the planetary knowledge core
Jump to: navigation, search
For French people in the United States, see French American. 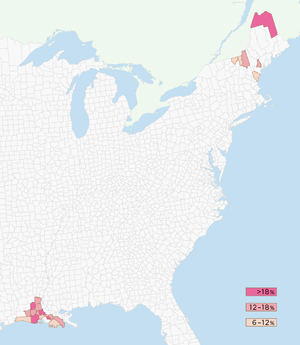 French language in the United States. Counties and parishes marked in yellow are those where 6–12% of the population speak French at home; brown, 12–18%; red, over 18%. The census response "Cajun" and French-based creole languages are not included

The French language is spoken as a minority language in the United States. Roughly 2.07 million Americans over the age of five reported speaking the language at home in a federal 2010 estimate,[1][2] making French the fourth most-spoken language in the nation behind English, Spanish, and Chinese (when Cajun, Haitian Creole and all other forms of French are included, and when Cantonese, Mandarin and other varieties of Chinese are similarly combined).[3]

Three major varieties of French developed in the United States: Louisiana French, spoken in Louisiana; New England French (a local variant of Canadian French spoken in New England); and the nearly extinct Missouri French, historically spoken in Missouri and Illinois. More recently, French has also been carried to various parts of the nation via immigration from Francophone regions. Today, French is the second-most spoken language in the states of Louisiana, Maine, New Hampshire and Vermont.[2][4]

A total of 10,804,304 people claimed French ancestry in the 2010 census[5] although other sources have recorded as many as 13 million people claiming this ancestry. Most French-speaking Americans are of this heritage, but there are also significant populations not of French descent who speak it as well, including those from Belgium, Switzerland, Haiti and numerous Francophone African countries. 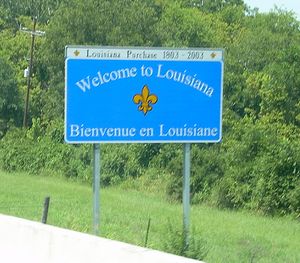 There are three major groups of French dialects that emerged in what is now the United States: Louisiana French, Missouri French, and New England French (essentially a variant of Canadian French).[6]

Louisiana French is itself traditionally divided into three dialects, Colonial French, Louisiana Creole French, and Cajun French.[7][8] Colonial French is traditionally said to have been the form of French spoken in the early days of settlement in the lower Mississippi River valley, and was once the language of the educated land-owning classes. Cajun French, derived from Acadian French, is said to have been introduced with the arrival of Acadian exiles in the 18th century. The Acadians, the francophone inhabitants of Acadia (modern Nova Scotia, New Brunswick, Prince Edward Island, and northern Maine), were expelled from their homeland between 1755 and 1763 by the British. Many Acadians settled in lower Louisiana, where they became known as Cajuns (a corruption of "Acadians"). Their dialect was regarded as the typical language of white lower classes, while Louisiana Creole French developed as the language of the black community. Today, most linguists regard Colonial French to have largely merged with Cajun, while Louisiana Creole remains a distinct variety.[8]

Missouri French was spoken by the descendants of 17th-century French settlers in east central Missouri, then called Haute-Lousiane (Upper Louisiana), especially in the area of Ste. Genevieve, St. Louis, and in Washington County. In the 1930s there were said to be about 600 French-speaking families in the Old Mines region between De Soto and Potosi.[9] By the late 20th century the dialect was nearly extinct, with only a few elderly speakers able to use it.[7]

New England French, essentially a local variety of Canadian French, is spoken in parts of the New England states. This area has a legacy of significant immigration from Canada, especially during the 19th and the early 20th centuries. Some Americans of French heritage who have lost the language are currently attempting to revive it.[10][11]

Ernest F. Haden identifies the French of Frenchville, Pennsylvania (Covington Township) as a distinct dialect of North American French.[12] "While the French enclave of Frenchville, Pennsylvania first received attention in the late 1960s, the variety of French spoken has not been the subject of systematic linguistic study. Haden reports that the geographical origin of its settlers is central France, as was also the case of New Orleans, but with settlement being more recent (1830–1840). He also reports that in the 1960s French seemed to be on the verge of extinction in the community."[13][14] 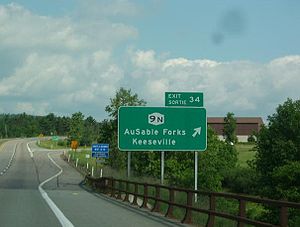 In Florida, the city of Miami is home to a large Francophone community, consisting of French expatriates, Haitians (who may also speak Haitian Creole, a separate language which is derived partially from French), and French Canadians; there is also a growing community of Francophone Africans in and around Orlando and Tampa. A small but sustaining French community that originated in San Francisco during the Gold Rush and was supplemented by French wine-making immigrants to the Bay Area is centered culturally around that city's French Quarter.

Many retired individuals from Quebec have moved either to Florida or Hawaii, or at least spend the winter there. Also, the many Canadians who travel to the Southeastern states in the winter and spring include a number of Francophones, mostly from Quebec but also from New Brunswick and Ontario. Quebecers and Acadians also tend to visit Louisiana, as Quebec and New Brunswick share a number of cultural ties with Louisiana.

French has traditionally been the foreign language of choice for English-speakers across the globe. While remaining so in Canada, Great Britain and Ireland, the distinction has since been claimed by Spanish in the United States – probably a consequence of heavy immigration from, and increased general interest in, Latin America. Since 1968,[15] French has ranked as the second-most-studied foreign language in the United States, behind Spanish but ahead of German and all other languages.[16] Some 1.2 million students from the elementary grades through high school were enrolled in French language courses in 2007-2008, or 14% of all students enrolled in foreign languages.[17]

Many American universities offer French-language courses, and degree programs in the language are common.[18] In the fall of 2013, 197,757 American university students were enrolled in French courses, or 12.7% of all foreign-language students and the second-highest total of any language (behind Spanish, with 790,756 students, or 50.6%).[19]

As a rule, the French taught in American classrooms is that of France, as opposed to Canadian French, despite the geographic proximity of Canada to the United States. This can cause confusion when U.S. students attempt to speak French in Canada, as there are significant dialectal differences between the two, although this is less so when using higher registers of speech, and the written forms of the two dialects are largely identical. However, most schools in Canada outside of Quebec also teach French as it is spoken in France as well.[20][not in citation given]

Counties and parishes with the highest proportion of French-speakers

Note: speakers of French-based creole languages are not included in percentages.

French newspapers in the United States

French schools in the United States