From Infogalactic: the planetary knowledge core
Jump to: navigation, search
For other uses, see Fret (disambiguation). 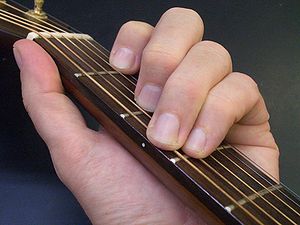 The neck of a guitar showing the nut (in the background, coloured white) and first four metal frets

Frets divide the neck into fixed segments at intervals related to a musical framework. On instruments such as guitars, each fret represents one semitone in the standard western system, in which one octave is divided into twelve semitones. Fret is often used as a verb, meaning simply "to press down the string behind a fret". Fretting often refers to the frets and/or their system of placement.

Pressing the string against the fret reduces the vibrating length of the string to that between the bridge and the next fret between the fretting finger and the bridge. This is damped if the string were stopped with the soft fingertip on a fretless fingerboard.

Frets make it much easier for a player to achieve an acceptable standard of intonation, since the frets determine the positions for the correct notes. Furthermore, a fretted fingerboard makes it easier to play chords accurately.

A disadvantage of frets is that they restrict pitches to the temperament defined by the fret positions. A player may still influence intonation, however, by pulling the string to the side to increase string tension and raise the pitch. This technique (commonly called 'bending') is often used by electric guitarists of all genres, and is an important part of sitar playing. On instruments with frets that are thicker off the fingerboard, string tension and pitch vary with finger pressure behind the fret. Sometimes a player can pull the string toward the bridge or nut, thus lowering or raising the string tension and pitch. However, except for instruments that accommodate extensive string pulling, like the sitar, much less influence on intonation is possible than on unfretted instruments.

Since the intonation of most modern western fretted instruments is equal tempered, the ratio of the distances of two consecutive frets to the bridge is

, or approximately 1.059463. Theoretically, the twelfth fret should divide the string in two exact halves. To compensate for the increase in string tension when the string is pressed against the frets, the bridge position is adjusted slightly so the 12th fret plays exactly in tune. 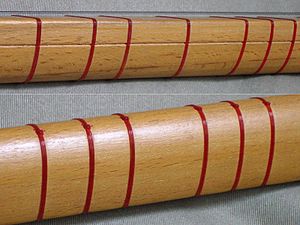 Frets tied on to the neck of a saz; note microtonal frets between semitones.

Fan frets (or fanned frets, or slanted frets): Most frets are perpendicular to the instrument's neck centerline and parallel to each other. On a fanned fret board, the frets are spread out like a fan—with only one center fret perpendicular to the necks centerline and the rest angled. This gives the lower-pitched strings more length and the higher strings shorter length (comparable to a piano or a harp where different strings also have different lengths). The idea is to give more accurate tuning and deeper bass. Some think that fanned frets might be more ergonomic. Fanned frets first appeared on the 16th century Orpharion, a variant of the cittern, tuned like a lute. John Starrett revived the idea in the late seventies on his innovative instrument, the Starrboard. Rickenbacker employed a slanted fret, but it was not multi scale, or fanned. Novax Guitars among others offers such guitars today. The appearance of angled frets on these modern instruments belies the antiquity of this technique.

Scalloped fretboard: Scalloping involves the wood between some or all of the frets being scooped out. This allows a lighter touch for a more precise playing while executing bends or vibratos (since there's no contact between the fingertips and the wooden part of the fingerboard). It has some popularity with musicians playing heavy metal music, although the concept can also be seen in ancient instruments such as the sitar.

Fat frets: on older guitars (especially the Fender Stratocaster), frets were typically made out of thin wire, and some electric guitar players replaced that with thicker wire, for "fat frets" or "jumbo frets". One possible benefit of using thicker wire is a fatter tone, though Dave Hunter points out that usually there are many more and more important factors in determining guitar tone. Fat frets do make bending easier, and they change the feel of the guitar--"smoother, more buttery". A side effect of a thicker fret is a less precise note, since the string is held over a wider surface, causing a slight blurring of the tone.[1]

It is also possible to find semi-fretted instruments; examples include the Malagasy kabosy and the Afghan Rubab. Semi-fretted versions of guitars and other fretted string instruments, however, are usually one-off, custom adaptations made for players who want to combine elements of both types of sound. One arrangement is for the frets to extend only part of the way along the neck so that the higher notes can be played with the smooth expression possible with a fretless fingerboard. Another approach is the use of frets that extend only partway across the fretboard so that some courses of strings are fretted and others fretless, for example Ryszard Latecki's Latar.

Instruments with straight frets like guitars require a special compensation on the saddle and nut. Every time a string is fretted it is also stretched, and as it stretches the string rises in pitch, making all fretted tones sound sharp. When the saddle is positioned properly, however, the fretted tones all sound sharp to the same degree as long as the distances between the frets are correct. With the right nut compensation, the pitch of the unfretted string can be raised by the same amount. As a result, when the tension of the strings is lowered, the pitches of all notes, both fretted and unfretted, becomes correct.

On instruments equipped with steel strings, such as folk guitars and electric guitars, frets are eventually bound to wear down as the strings cut grooves into them. When this happens, the instrument may need refretting (the frets are removed and replaced) or, in less severe cases, "fret dressing" (the frets are leveled, polished, and possibly recrowned). Often, a few fret dressings can be performed on a guitar before it requires complete refretting.

Tied gut frets, used on instruments such as the lute or viol, wear quickly, and must be replaced regularly.

Fret buzz is one of the many undesirable phenomena that can occur on a guitar or similar stringed instrument. Fret buzz occurs when the vibrating part of one or more strings physically strikes the frets that are higher than the fretted note (or open note). This causes a "buzzing" sound on the guitar that can range from a small annoyance, to severe enough to dampen the note and greatly reduce sustain. Sometimes, fret buzz can be so minimal that there is only a small change in the tone (timbre) of the note, without any noticeable buzzing. Fret buzz can be caused by different things:[2]

Fret buzz is evident in some famous recordings; an example is "Friends" by Led Zeppelin (although this example is undoubtedly caused by alternate open tunings that reduce string tension). In some songs, such as "My Last Serenade" by Killswitch Engage, the guitars are tuned to Dropped C and the low tension of the strings are used to create fret buzz by the bass player in order to create a dirty sound.