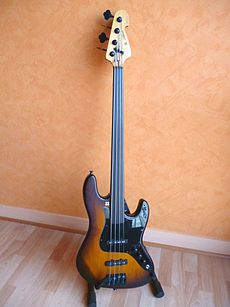 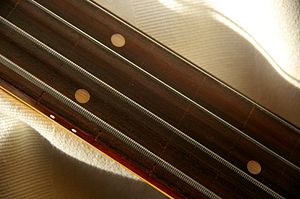 Fretboard of a fretless bass; markers are inlaid into the side of the fingerboard, to aid the performer in finding the correct pitch.

1) the position where the finger marks the string is not as exact as in fretted instruments, requiring greater finger position precision, and

2) the resonance of strings is different and may require more apt plucking or modified amplification (pickups) to achieve desired volume, and

3) the smooth form of the fingerboard allows for slides between notes which are natural and not notched to particular notes.

It operates in the same manner as most other stringed instruments and traditional guitars, but does not have any frets to act as the lower end point (node) of the vibrating string. On a fretless guitar, the vibrating string length runs from the bridge, where the strings are attached, all the way up to the point where the fingertip presses the string down on the fingerboard. Fretless guitars are fairly uncommon in most forms of western music and generally limited to the electrified instruments due to decreased acoustic volume and sustain in fretless instruments. However, the fretless bass guitar has gained fairly widespread popularity and many models of bass guitar can be found in fretless varieties. Fretless electric bass is particularly popular among jazz, funk and R&B players due to the similarity in feel and sound to the acoustic double bass.

The oud, often considered as an ancestor of the guitar, is a fretless instrument, as is the violin family.

Fretless guitars are typically modified versions of factory-made traditionally "fretted" guitars, the frets being removed by the player or a professional luthier. There are also professional builders specialising in custom-made fretless guitars.

Fretless bass guitars are much more common than fretless guitars, and there are many manufacturers offering these as standard models.