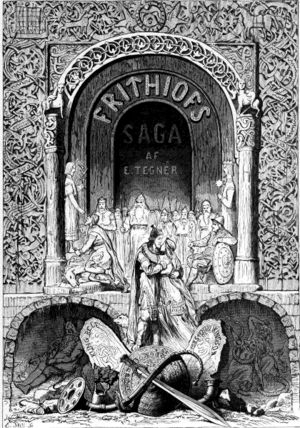 Friðþjófs saga hins frœkna (Frithiof's Saga) is a legendary saga from Iceland which in its present form is from ca 1300. It is a continuation from The Saga of Thorstein Víkingsson (Þorsteins saga Víkingssonar). It takes place principally in Norway during the 8th century.[1] 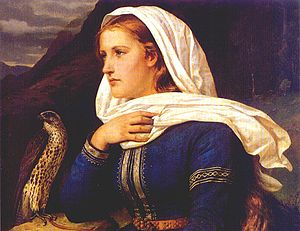 King Beli of Sogn (a traditional district in Western Norway) had two sons and a daughter named Ingeborg. Helgi was his first son, and Halfdan his second. On the other side of the fjord, lived the king's friend Thorstein (Þorsteinn Víkingsson) whose son Frithjof (Friðþjófr) was called the bold (hinn frœkni). Frithiof was the tallest, strongest and he was the bravest among men.

When the king's children were but young their mother died. A goodman of Sogn named Hilding (Hildingr), prayed to have the king's daughter to foster. Frithjof was the foster-brother to the king's daughter as he was also raised together with Ingeborg (Ingibjörg) by their foster-father Hilding.

Both Beli and Þorsteinn died in war whereupon Helgi and Halfdan took over the kingdom. The two kings were jealous of Frithjof's excellent qualities and so they denied him Ingeborg's hand. They took her to Baldr's sacred enclosure Baldrshagi where no one dared hurt another and where no woman and man had intercourse. Still Frithjof visited Ingeborg and they continued to love each other. This caused Helgi and Halfdan to send Frithjof away to Orkney to take tribute and while he was away they burnt down his homestead and married Ingeborg to King Ring, the aged king of Ringerike[citation needed].

When Frithjof returned with the tribute, he burnt down Baldr's temple in Baldrshagi and went away to live as a viking. After three years, he came to King Ring and spent the winter with him. Just before the old king died, Frithjof's identity was apparent to everybody and so the dying king appointed Frithjof earl and made him the care-taker of Ring's and Ingeborg's child.

When Ring had died, Frithjof and Ingeborg married and he became the king of Ringerike. Then he declared war on Ingeborg's brothers, killed one of them and made the second one his vassal.

Frithjof's Saga is said to have been translated twenty-two times into English, twenty times into German, and once at least into every European language, including modern Icelandic in 1866. The Norwegian translation from the Icelandic by Ivar Aasen acted precisely on this saga.[clarification needed]

Frithiof's Saga had first been translated into Swedish in 1737. In 1820, Swedish writer Esaias Tegnér published fragments in form of epic poetry in Iduna, the journal of the Geatish Society. In 1822, he composed five more cantos. In 1825 he published the entire poem Frithiof's Saga. Even before it was completed, it was famous throughout Europe; the aged Johann Wolfgang von Goethe took up his pen to commend to his countrymen this alte, kraftige, gigantischbarbarische Dichtart ("old, mighty, gigantic-barbaric style of verse"), and desired Amalie von Imhoff to translate it into German. This romantic paraphrase of an ancient saga was composed in twenty-four cantos, all using different poetic forms.

Kaiser Wilhelm II of Germany had a statue of Fridtjof raised in the village of Vangsnes in Vik in the county of Sogn og Fjordane, Norway. The Statue of Fridtjof (Fridtjof den frøkne) is a landmark which towers 22.5 metres (74 ft) over the hilltop. It stands in a park overlooking the Sognefjord. The statue was sculpted by the German sculptor and art professor Max Unger (1854-1918) and was erected in July 1913.[2][3] Wilhelm II also ordered in 1890 that a coastal defense ship be named Frithjof after the Norse hero.[4]

Frithjof's Saga was used as an inspiration by several composers. The first was Max Bruch, who composed his cantata Frithjof, opus 23, in 1864. The most famous example is the Frithj of Symphony in F major, Op. 22, by the German composer Heinrich Hofmann (not to be confused with the identically-named and contemporaneous German painter). This piece was one of the most-played pieces in European concert halls at the end of the 19th century. Another example is a work by the Dutch composer Johan Wagenaar, the concert piece for orchestra Fritjof's Meeresfahrt, opus 5. Swedish composer Elfrida Andrée wrote an opera to a libretto by Selma Lagerlöf based on the poem, also called Frithjof's Saga; it was never performed publicly, but selections from the opera received a private hearing in 1898. In the manuscript score of the work, two arias and a chorus are translated into German, suggesting that Andrée may have sought their performance for a German audience. Andrée reworked music from the opera into a five-movement suite, Fritiov-svit that has seen performance as recently as 1995 in Sweden. Dutch composer Cornelis Dopper also wrote an opera called Frithjof in 1895, but it was never performed. Felix Draeseke wrote a symphonic poem Frithjof (cataloged as his WoO 7); although begun in 1859 it was completed in 1865 and is his first major orchestral work and is over 40 minutes in length.