From Infogalactic: the planetary knowledge core
Jump to: navigation, search
This article is about the Point Breeze, Pittsburgh museum. For the University of Pittsburgh's, see Frick Fine Arts Building. For New York's, see Frick Collection. 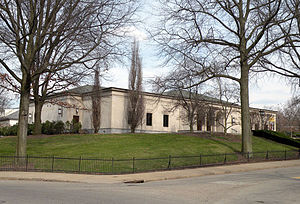 The Frick Art & Historical Center is a cluster of museums and historical buildings located at 7227 Reynolds Street, Pittsburgh, Pennsylvania, United States and formed around the Frick family's nineteenth-century residence known as "Clayton". It focuses on the interpretation of the life and times of Henry Clay Frick (1849–1919), industrialist and art collector.

The complex, located on 5.5 acres (22,000 m2)[1] of lawn and gardens in the city's Point Breeze neighborhood, includes Clayton, the restored Frick mansion; The Frick Art Museum; The Car and Carriage Museum; the Greenhouse; the Frick children's playhouse; and The Café. The site welcomes over 100,000 visitors a year. Admission is free.

Helen Clay Frick (1888—1984) was the driving force to preserve the Frick estate and allow it to open to the public after her death.

Today's museum began as an eleven-room, Italianate-style house purchased by the Fricks shortly after their marriage in 1881. The house was built in the 1860s, original architect unknown. After modifications by Pittsburgh architect Andrew Peebles, it was renamed "Clayton". Further remodeling of the house was done in 1892 by Pittsburgh architect Frederick J. Osterling. The Playhouse was constructed in 1897 to designs by architects Alden & Harlow. The house served as the Fricks' primary residence from 1883 to 1905. The Fricks moved to New York City in 1905, where they eventually established the Frick Collection, but in 1981 daughter Helen Clay Frick returned to Clayton, where she had previously spent part of each year, and remained there permanently until her death in 1984. Clayton opened to the public in 1990, and in 1997 the 1950s carriage house was enlarged to create the Car and Carriage Museum.

The museum has hosted major visiting exhibitions including, Killer Heels.[3] 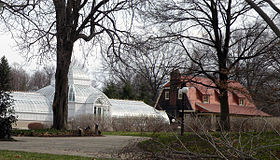 The greenhouse at the Frick Art & Historical Center