Friern Barnet /ˌfraɪərn ˈbɑːrnᵻt/ is an area within the London Borough of Barnet. It is a suburban development situated 7.4 miles (11.9 km) north of Charing Cross. The centre of Friern Barnet is formed by the busy intersection of Colney Hatch Lane (which runs north-south), Woodhouse Road (taking west-bound traffic towards North Finchley) and Friern Barnet Road (leading east towards New Southgate).

Friern Barnet was an ancient parish in the Finsbury division of Ossulstone hundred, in the county of Middlesex. 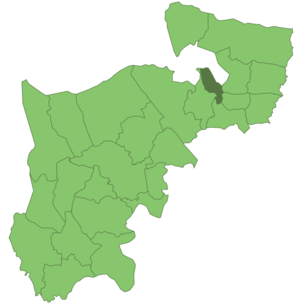 Friern Barnet within Middlesex in 1961

The area was originally considered to be part of Barnet, most of which was in Hertfordshire. By the thirteenth century the Middlesex section of Barnet was known as "Little Barnet", before becoming "Frerenbarnet" and then "Friern Barnet" (in the past also sometimes spelt in other ways, such as "Fryern Barnett"). The "Friern" part of the parish's name derives from the French for "brother", and refers to the medieval lordship of the Brotherhood or Knights of the Hospital of St John of Jerusalem.[1][2]

Friern Barnet was mainly rural until the nineteenth century. The opening of Colney Hatch pauper lunatic asylum in 1851, and of railway stations on the Great Northern and Metropolitan Railways, also in the middle of the nineteenth century, began its development as an outer London suburb.[1] This process was accelerated by the arrival of electric trams in the 1900s.[3]

Local affairs were administered by the parish vestry until 1875, when it was grouped with neighbouring parishes as part of Barnet Rural Sanitary District. In response to a petition by local ratepayers who wished the area to be removed from the Barnet RSD, the parish adopted the Local Government Act 1858 and formed a local board of health of nine members in 1884. Under the Local Government Act 1894 the local board's area became an urban district.[4][5] The urban district occupied an area of 1,304 acres (5.28 km2) in 1911 and had a population of 14,924. In 1961 it occupied an area of 1,342 acres (5.43 km2) and the population was 28,813.[6] In 1965 it became part of the London Borough of Barnet.

The housing in this area typically consists of late Victorian and early Edwardian properties as well as other large houses from later periods and many smaller semi-detached and terraced houses. Much of the property is owner-occupied, but in recent years many of the larger properties have been subdivided into flats and bedsits. There are also some areas of modern housing, notably Princess Park Manor, a luxury redevelopment of the once-famous Victorian institution the Colney Hatch Lunatic Asylum.

Friern Barnet is a leafy suburb of private gardens and trees and Friary Park. The area includes the North Middlesex Golf Club, whose main entrance is at the Whetstone end of Friern Barnet Lane, and Coppetts Wood nature reserve, a medium-sized green area of rare plants and wildlife including some types of small Bat and Great Crested Newts.

The Church of England parish church of St John The Evangelist in Friern Barnet Road is Grade II* listed.[7]

The Grade II listed former Town Hall in Friern Barnet Lane was built in 1939–41 to a design by Sir John Brown and A.E. Henson. The design owes much to that of Watford Town Hall, whose architect (Charles Cowles-Voysey) had played a pivotal role in judging the design competition. Nevertheless, English Heritage lists it as "a good example of pared-down modernism ... its subtle form and pronounced sense of civic pride mark it out as an exceptional civic building, on this scale, of its day".[8]

Main article: List of schools in the London Borough of Barnet

The North Circular Road bisects the southern part. The nearest London Underground stations are Arnos Grove and Finchley Central. The nearest National Rail station is New Southgate. The area is served by London Buses routes 34, 43, 134, 221, 232, 234, 382, 634 and 683.

The area has recently seen a boom in the tertiary sector with many salons and beauty parlours opening along Woodhouse Road.